By William Petrocelli of Book Passage in San Francisco and Corte Madera, California

What looks like a simple price war between Amazon, Target, and Wal-Mart over a handful of bestsellers is symptomatic of a much deeper problem in the book business. The larger fight is really over what you get to read.

Faced with significant education and general budget shortfalls, officials in Alabama are examining the possibility of bringing the state into compliance with the Streamlined Sales and Use Tax Agreement (SSUTA) to recoup an estimated $104 million that could be lost in 2009 to remote online retailers, as reported by the Alabama Press-Register.

The Board of Directors of the American Booksellers Association today sent the following letter to the U.S. Department of Justice requesting that it investigate practices by Amazon.com, Wal-Mart, and Target that it believes constitute illegal predatory pricing that is damaging to the book industry and harmful to consumers.

VIA OVERNIGHT MAIL AND E-MAIL

On September 24, the American Booksellers Association wrote to the Arizona Department of Revenue to point out, once again, that Amazon.com's distribution facilities in Phoenix and Goodyear, Arizona, constitute a physical presence in the state and require the online giant to collect and remit sales tax for purchases made by Arizona residents.

By Chris Finan, President of the American Booksellers Foundation for Free Expression

It never hurts to be lucky.

Connecticut has finally resolved its budget battles two months after the start of the state's fiscal year, but, unfortunately for the state's bricks-and-mortar businesses, e-fairness legislation was left on the cutting room floor.

On Tuesday, July 14, Democratic leaders introduced into the U.S. House of Representatives comprehensive health care reform legislation. The bill, America's Affordable Health Choices Act, was introduced against a backdrop of ongoing public and political debate over policy, legislative details, and cost. Meanwhile, House Republicans announced this week that they would be introducing an alternative health care reform bill, which, they contend, will be less costly than the legislation introduced by their Democratic colleagues.

The fight for sales tax equity continued in several states this week. National retail giants threatened that they would de-list affiliates if legislation enforcing e-fairness was approved, and state legislators continued the difficult task of negotiating budget settlements.

With Congress scheduled to recess in just a few weeks, lawmakers have continued to focus on health care reform.

Here is a look at some of the latest developments:

When Rhode Island Gov. Donald Carcieri signed his state's new budget into law on Tuesday, June 30, Rhode Island became the second state to require online retailers with affiliates in the state to collect tax on sales made to in-state residents over the Internet.

Congress, voters, and the President all continued to focus on the issue of health care reform this week, and a major player in the political debate -- the Obama administration -- issued a report on how the escalating costs of health care adversely affect small businesses.

With President Obama pressing Congress to draft viable and fiscally prudent health care reform legislation by October, the debate over how to reform health care has intensified. 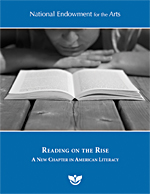 Literary reading among American adults is on the rise for the first time in more than 25 years, according to new report released this week by National Endowment for the Arts (NEA).

The Association of American Publishers (AAP) has announced the latest and perhaps most exclusive celebrity to ever have participated in its Get Caught Reading campaign -- Santa Claus!

In Get Caught Reading's newest image, which is inclusive of the "Books=Gifts" message, Santa takes a minute out of his busy gift-delivering eve to read a book. The image is available now on the Get Caught Reading website.