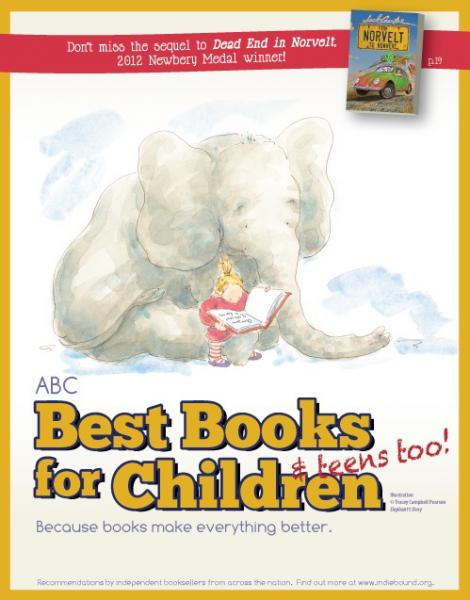 This month, the cover of the Fall 2013 ABC Best Books for Children Catalog was chosen by members of the ABC Advisory Council. This year’s cover features an illustration from Tracey Campbell Pearson’s Elephant’s Story, published by Farrar, Straus and Giroux Books for Young Readers, a division of Macmillan Children’s Publishing Group.  Pearson’s book, publishing in late October, is the sweet story of an elephant who finds both a lost book and a new friend.

The 2013 cover also showcases cover art from the sequel to Jack Gantos’ Newbery Award winning Dead End in Norvelt. The sequel, From Norvelt to Nowhere, which will also be published by Farrar, Straus and Giroux Books for Young Readers, comes out in late September.

The ABC Best Books for Children Catalog, the premier consumer catalog for the children’s book industry, is published annually and contains more than 200 fully-vetted titles for children and teens, gathered from independent children’s booksellers from across the nation.

The ABC Children’s Group at ABA is still seeking indie booksellers’ title recommendations for the catalog. Indie booksellers can send nominations to ABC Group Manager Shannon O’Connor via e-mail.  The deadline for submissions is Monday, July 1.

When sending in recommendations, booksellers should try to provide as much bibliographic information (title, author, ISBN, publisher, price, age range, format, pub date) as is possible. A short blurb in support of the book is welcome but is not required.  The catalog will feature books that were published between January 2013 and October 2013.