The 2015 Find Waldo Local Campaign begins on Wednesday, July 1, at indie bookstores and other locally owned businesses across the nation. The event, sponsored by Candlewick Press, leads participants on a scavenger hunt through their towns’ business districts on a search for the elusive, red-and-white-stripe wearing picture book character.

The campaign, which is co-sponsored by the American Booksellers Association, aims to promote the value of shopping locally through fun activities involving the bespectacled character created by British illustrator Martin Handford in his popular Where’s Waldo? series.

This year, as in the past, shoppers who spot Waldo at participating local businesses in July become eligible for prizes throughout the month. The celebration then concludes with a closing ceremony or wrap-up party at participating bookstores at the end of the month.

In Petaluma, California, Copperfield’s children’s specialist Patty Norman said that more than 56 merchants throughout the city’s shopping district have signed on to participate in the July event. Kids — and sometimes even teens home from college and occasional adults out on date nights — will travel from store to store with a bingo-style card in hand to qualify for raffle tickets, with prizes to be handed out at the wrap-up party.

“Last year, I approached the Petaluma Museum to see if they’d be interested … and they allowed us to include them on the bingo card,” Norman said. “They had such a blast! They moved Waldo from one display to the next, and I guarantee you they probably had 600 kids come through who had never set foot in the museum before! They were one of the first to sign up again this year.”

In Lake Placid, New York, Sarah Galvin, who co-owns The Bookstore Plus with her husband, Marc, said they are thrilled to once again be hosting Find Waldo Local along with 25 other local businesses this July.

“This year we have included businesses that aren’t right on our Main Street to spread the Find Waldo love around Lake Placid even more,” Galvin told Bookselling This Week. “We will end the month-long celebration with our Find Waldo local party on July 31 at 5:00 p.m., with prizes, cake, and a costume contest.” 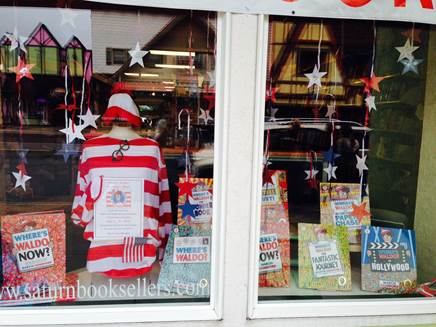 In a post on the store’s online events calendar, the Galvins wrote, “Find Waldo is a great summer vacation activity, and a wonderful way for residents to support local business and the Shop Local movement.”

To generate early excitement for this month’s event, after receiving their box of goodies from Candlewick in June, the booksellers at The Book Nook, in Brenham, Texas, created an “Unboxing Waldo” video — in the tradition of “haul videos” on YouTube. This year’s freebies from Candlewick included mini Waldo standees, window clings, prize buttons and books, reproducible passports, coupons, posters, bag stuffers, and activity sheets, as well as sample pitch letters, press releases, and social media materials.

After its first successful scavenger hunt last summer, Bluebird Books in Hutchinson, Kansas, is once again organizing a month-long Find Waldo Local celebration with area merchants that features a closing party on August 1 with prize giveaways. The bookstore will also have a local Waldo enthusiast dress up as the iconic character and hide in plain sight during community events throughout the month of July, said Bluebird owner Melanie Green. Find Waldo Local was such a hit last year, she added, that organizers of the city’s Smallville Festival asked the bookstore to create a similar event, featuring Superman, for their recent community celebration.

Brandi Stewart of Changing Hands Bookstore's downtown Phoenix location said that now, after a full year in business, the store will participate in Find Waldo Local for the first time. The store’s Waldo wrap-up party on Saturday, July 25, promises to be the highlight of the month, Stewart said, featuring prizes contributed by most of the participating businesses, along with a number of other surprises. 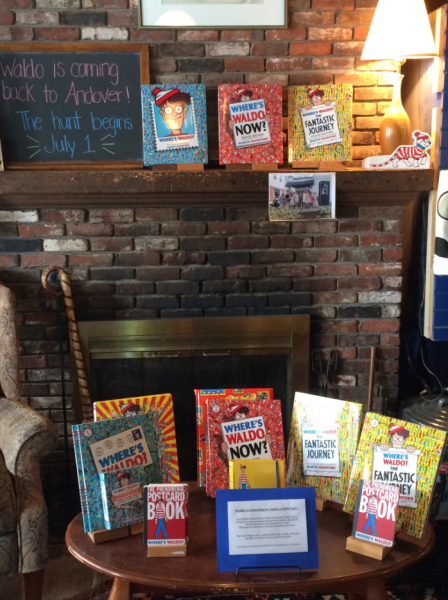 “Our bartenders [at the Phoenix store’s First Draft Book Bar] are crafting red and white refreshments, and we’ll have Find Waldo Local activity stations, including photos with Waldo in-person,” she said. “The staff can’t wait to get started. We’ve been planning our costumes for weeks.”

Elise Supovitz, executive director of independent retail and Canadian sales for Candlewick Press, thanked ABA member booksellers for their continued support of what has become a much-anticipated community event.

“After four years, I think it’s safe to say that Find Waldo Local has become a summer tradition, one that communities across America look forward to all year-long,” Supovitz said. “This year’s Find Waldo Local promotion will be better than ever, primarily because our host indie bookstores, with their singular enthusiasm and creativity, build and grow this event each year.”