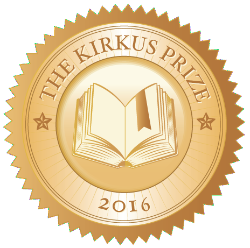 The winners of the third annual Kirkus Prize for fiction, nonfiction, and young readers’ literature were announced by Kirkus Reviews on Thursday, November 3, at a ceremony in Austin, Texas.

The winners and five finalists in each category were chosen by a panel of judges composed of writers, booksellers, librarians, and Kirkus critics.

To help stores promote the winners and finalists, Kirkus will be sending marketing materials including stickers, a link to a PDF of shelf-talkers, and rules for a display contest in the December Red Box. The display contest winner will receive $500, a three-year subscription to Kirkus Reviews, as well as coverage at KirkusReviews.com. One runner-up will win $100 and a one-year subscription to Kirkus, as well as coverage at KirkusReviews.com.

To participate in the display contest, booksellers should highlight this year’s prize winners or this year’s winners and finalists for at least one week in an in-store or window display during the month of December. Displays will be judged on their creativity and eye-catching appeal. Bonus points will be given for clever social media engagement. Three photos of the display, along with a photo credit, should be sent to Kirkus Senior Indie Editor Karen Schechner by January 6.

Annie Philbrick, the owner of Bank Square Books in Mystic, Connecticut, and Savoy Bookshop and Café in Westerly, Rhode Island, was one of three judges for the 2016 Fiction prize.

“We read over 200 books from numerous publishers, all starred reviews by Kirkus, making the choice of six titles particularly difficult,” said Philbrick. “I was impressed by the quality of writing, and the support we received from the publishers and from Kirkus staff. The $50,000 prize is a philanthropic gift that all booksellers need to be aware of and pay attention to as the choice is made carefully and thoroughly by the judges. Being only the third year in existence, the Kirkus Prize will only grow in importance and stature, and booksellers should work towards promoting these award books in their bookstores. I was honored and humbled by the books and the reading process.”

More information about the 2016 Kirkus Prize, including eligibility requirements, the selection process, and bios of the finalists and judges, is available at Kirkus Reviews/prize.