In 2019, Indies First on Small Business Saturday Proves a Success Once Again

Independent booksellers across the country hosted celebrations for this year’s Indies First on Small Business Saturday, November 30, with the typical fun festivities, sales and discounts, and author events to kick off the holiday shopping season. According to American Express, about 110 million U.S. consumers shopped at local independently owned businesses and restaurants on the 10th annual Small Business Saturday.

Sales at independent bookstores nationwide were up 1.6 percent for the week that includes Small Business Saturday, the American Booksellers Association found, and Cyber Monday 2019 was the single highest online sales day ever for IndieCommerce and IndieLite websites; online sales increased by 27 percent over Cyber Monday 2018. In addition, visitors to IndieCommerce and IndieLite websites bought more merchandise than they did for last year’s event, resulting in a notable conversion rate (the number of website visitors who make a purchase) of 3.89 percent in 2019 versus 3.09 percent in 2018.

The Associated Press reported that, overall, shoppers spent $3.6 billion buying online from small businesses on Saturday, which, as measured by Adobe Analytics, is up 18 percent from last year. In addition, according to a survey by the National Retail Federation, nearly 190 million people made purchases over the five-day holiday shopping period from Thanksgiving Day through Cyber Monday, an increase of roughly 14 percent from a year ago. 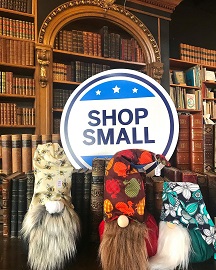 Small Business Saturday decorations at Loganberry Books in Ohio.
As recent years have seen hundreds of new indie bookstores opening and new owners taking the reins of existing shops, this year’s Indies First on Small Business Saturday further underscored the growth of the indie bookstore channel. Part of this success is due to the growth of the localism movement, with Indies First and American Express’ Small Business Saturday as clear drivers.
”From its launch, a central goal for Indies First on Small Business Saturday has been to harness the collective power of indie bookstores nationwide and heighten consumer awareness of their locally owned independent bookstores. As in-store traffic and sales have increased in subsequent years, it's heartening to see the growing awareness of the unique role indies play in connecting authors and readers," said ABA COO Joy Dallanegra-Sanger, who added, “we are extremely grateful to N.K. Jemisin for her participation and support of Indies First.”
On Saturday, Jemisin, who served as the 2019 spokesperson for Indies First, signed copies of her books at Greenlight Bookstore, WORD Bookstore, and Café con Libros in Brooklyn, New York. The science fiction and fantasy author also tweeted regularly leading up to the event and had created a special promotional video for Indies First. 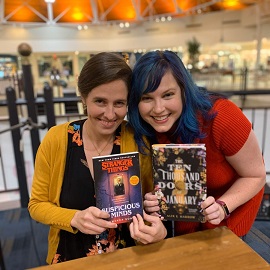 Authors Alix E. Harrow (left) and Gwenda Bond (right) at Joseph-Beth Booksellers.
Some of the booksellers around the country who participated in this year’s event included Sara Luce Look, co-owner of Charis Books & More in Decatur, Georgia, who told Bookselling This Week that this year’s Small Business Saturday brought sales that were up about 25 percent from 2018.
“Instead of organizing local authors to be guest booksellers this year, we gave 20 percent off all signed books, which included titles by Angie Thomas, Kiese Laymon, and Tayari Jones, to name a few,” Look said. “This November, we celebrated 45 years of feminist bookselling. Our annual birthday celebration and Indies First/Small Business Saturday are always great ways for us to kick off the holiday selling season.”
Christy McDanold of Secret Garden Books in Seattle, Washington, said her store participated in a local initiative called Ballard Gives to celebrate Small Business Saturday. All of the participating businesses partnered with different nonprofits, and this year, Secret Garden partnered with the Army Corps of Engineers in Seattle to help raise $1.5 million to remodel the Ballard Locks Fish Ladder viewing room.
“We didn’t have authors in or anything this year. We just sold books all day long,” McDanold said. “It was a good day, and Cyber Monday was good, too. So far, our sales this year is up about two percent, despite construction nearby and a recent fire. There’s been a lot of hits, but I feel pretty good about the year considering those types of challenges.”

“Over the weekend, we saw so many old friends and new friends, too,” McDanold added, “people who bring their folks back to visit, or grown children who grew up with us who come back from college to visit. It’s really a joyful weekend.”

Sabrina Caldwell told BTW that Saturday was the best sales day ever for her store, The Book Haus in New Braunfels, Texas, which opened in April 2018. “We had a promotion of 20 percent off the entire store and had Santa come to visit and decorate cupcakes with the kids,” Caldwell said.

“Small Business Saturday this year was the highest sales my store has ever had. Last year I was really new and we didn’t promote the day very well,” she noted, but this year was different. 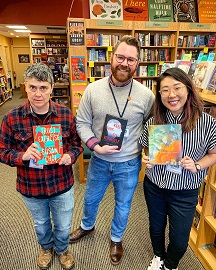 To promote this year’s event, Caldwell made good use of the marketing materials provided in ABA’s Marketing Assets section on BookWeb, and while she did invite a couple of authors to attend the festivities that day, she suspects she waited too long to contact others about it, preventing a truly robust response.

On Small Business Saturday, Bayfield, Wisconsin, home of Apostle Islands Booksellers, got smacked with the biggest snowstorm in years, said manager Kristen Sandstrom, slowing sales during the first half of the day and forcing the store to close in the afternoon.

“It was the worst Indies First ever; Mother Nature had something to say,” said Sandstrom. “While we were open on Saturday, business stopped at about 1:00 p.m. because everyone just went home to prepare for the storm. In town we got about 34 inches of snow in about 18 hours.”

But Sandstrom told BTW she is working on making up lost sales from that day as well as the subsequent few days of slower sales as people recovered from the storm. To accomplish this, she is putting together a promotional e-mail offering discounted shipping on online orders, which will be sent out to their database of customers from the store’s IndieLite website. Sandstrom said she hopes that this online shopping promotion will help the store to recoup some of the money lost due to this past weekend’s “epic” snowstorm.

“Sales-wise, we’re hoping to make up the days we missed. We dug out and the plows have come through, so this week it’s all sort of going ok, although there are still places where it’s hard to park on our street. We’re thinking that what doesn’t kill us makes us stronger and just trying to stay positive. Living here, I’ve really never seen three feet of snow in less than a 24-hour period. ” 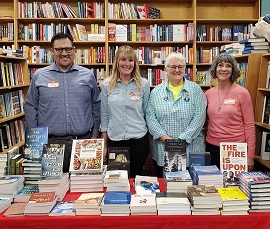 Lois Hanson, owner of Paragraphs Bookstore in Mt. Vernon, Ohio, said that her store, which opened in 1996, invited local illustrator Tim Bowers to hang out at the store on Small Business Saturday alongside a display of some of his books. Bowers is the illustrator of more than 50 picture books, including New York Times bestsellers Dream Big, Little Pig! by Kristi Yamaguchi (Sourcebooks Jabberwocky) and Dinosaur Pet by Neil Sedaka and Marc Sedaka (Charlesbridge).

“He sold his books by just being there talking to people, schmoozing, and autographing, and he even personalized each book with a drawing,” said Hanson. “We had one of our largest sales days ever, and we were all exhausted by the end. At the end of the day, when we ran the register tape, it just kept going, so that was really nice.”
Paragraphs was also competing that Saturday against the local college football game, which she says is “almost a religion out here.” With the Ohio State/Michigan game on TV that day, Hanson wasn't sure whether people would decide to stay home and watch the game instead of shop. 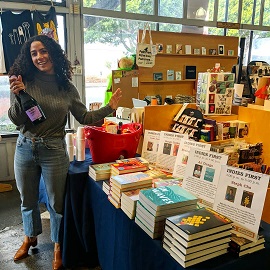 Laura Cummings of White Birch Books in North Conway, New Hampshire, shared that in addition to Small Business Saturday, her store participated in a local initiative called Plaid Friday. “We have a lot of fun with it. Everyone wears plaid, and if you come in wearing plaid, we offer a little special for you and give out plaid scarves,” she said.

On Saturday, White Birch Books also took part in a shop local passport initiative, which encouraged customers to shop at a variety of independently owned businesses all weekend long. At the end, customers turned their passports in to be entered into a raffle with prizes from participating businesses.

While sales on Small Business Saturday were impacted by both the weather and a later-than-usual Thanksgiving, Cummings noted that it was “still a great day.”

“We had so many customers and so much fun,” said Cummings, noting that for her store, Small Business Saturday is usually one of the biggest sales days of the year. “My favorite is when people come in on Black Friday or Small Business Saturday and say they’re shopping with us specifically for those reasons. It’s exciting when they purposefully come here to spend their money with us — when you don’t have to educate them anymore. They know!”

Business on Indies First and Small Business Saturday at Books and Greetings in Northvale, New Jersey, was brisk, according to owner Kenny Sarfin. 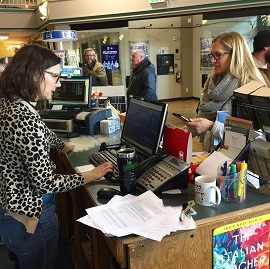 A busy Small Business Saturday at Auntie's Bookstore in Spokane.

“We offered a 25 percent discount on many autographed books that we had quantities of, and we offered everyone who spent over $50 a free box of bakery cookies,” said Sarfin. “We also discounted all jewelry 25 percent, and we had an early bird incentive of 20 percent off your entire purchase from 9:00 a.m. to 10:00 a.m.”

While the store did not feature any author events this year, these other promotions made for a successful sales day, he said.

Ross Rojek from Capital Books in Sacramento, California, told BTW that this was his store’s first Small Business Saturday. “It was a good day,” he said, noting that while it wasn’t the best day of the year yet, it was pretty close.

Capital Books offered a 20 percent in-store discount to celebrate the retail holiday, in addition to book bundles and other discounts. The store also partnered with other local businesses to offer customers free hot chocolate and tea.

To promote the day, Rojek added, Capital Books and fellow local businesses teamed up to coordinate social media posts; these posts included profiles of different employees, which were shared from store to store and across platforms. 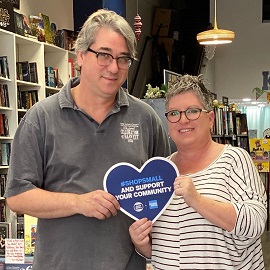 “A lot of the day was seeing regular customers that had been planning on coming in; when you’re part of the community, people come in because they just want to say hi. We have a display every month that tells everybody how many books we’ve sold during the month and what our goal is, and people come in to buy one book to help the number go up,” he said.

“It’s always nice when somebody comes in and gets that. We got an online order from someone who was out of town but wanted to make sure they bought something from us on Small Business Saturday, so that was nice. And we had a bunch of new customers, too, who came downtown to wander around and shop.”

—With reporting by Liz Button and Emily Behnke