Attendees at the annual PEN America dinner on Tuesday, April 25, will pause to honor Gui Minhai, the Hong Kong publisher and bookseller who is being held without charge on the Chinese mainland. The Association of American Publishers will present the Jeri Laber International Freedom to Publish Award to Gui’s daughter, Angela, who has been leading an international campaign to win Gui’s release.

Gui is a founder of Mighty Current Media, a publisher and distributor of books specializing in mainland Chinese politics and the lives of Chinese politicians. The books, some of which have portrayed Chinese officials in unflattering ways, are popular with Chinese from the mainland who purchase them during visits to Hong Kong.  Mighty Current owns the Causeway Bay Bookstore in Hong Kong.

Gui and four other employees of Mighty Current disappeared in the fall of 2015. Gui, a Swedish citizen, was taken from his vacation home in Thailand and transported to China, where the others were also held. Gui is the only one who is still in custody.

The Jeri Laber Award is given annually by the AAP International Freedom to Publish Committee (IFTPC) to a book publisher outside the United States who has demonstrated courage and fortitude in the face of restrictions on freedom of expression. 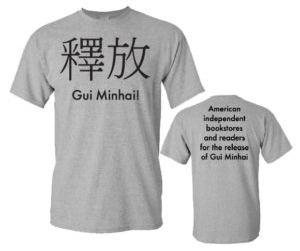 “This is a truly shocking case of how far a government will go to quash free expression — in this instance, not only illegally detaining and severely interrogating Gui, but seizing him when he was abroad in another foreign country,” Geoff Shandler, the IFTPC chair, said. Shandler is vice president and editorial director of Custom House/William Morrow.

American Booksellers for Free Expression (ABFE) will take advantage of the PEN dinner to present Angela Gui with a check for the proceeds from the sale of T-shirts that it created to raise funds to support the campaign to free her father. The front of the shirt uses Chinese characters to demand Gui’s release. The back reads, “American independent bookstores and readers for the release of Gui Minhai.”

The shirts can be purchased here. Donations can also be made online.