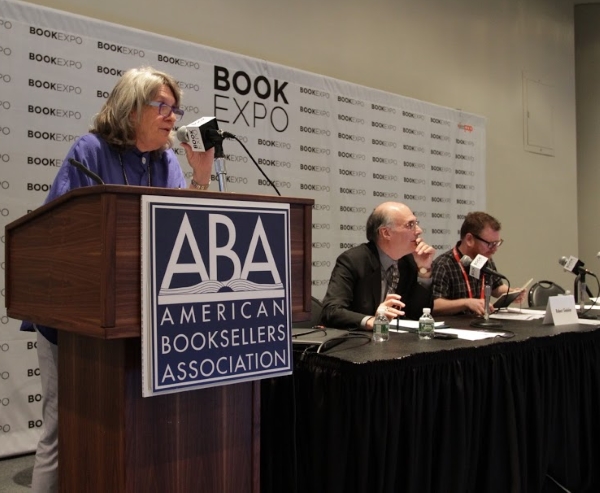 The scene at the American Booksellers Association’s Annual Membership Meeting on Thursday, June 1, at BookExpo, was a bittersweet one as Betsy Burton of The King’s English Bookshop in Salt Lake City, Utah, bid farewell after her two years of service as ABA president and a total of eight years on the ABA Board.

Burton called the meeting to order and provided the Report of the President.

In beginning her remarks, Burton said a key underlying purpose during her time on the Board and as president was to develop programs that would help independent booksellers. She noted ABA’s ongoing discussions with publishers regarding improved terms and promoting backlist titles, the improvements in technology available to booksellers, and most recently, the creation of ABA’s Diversity Task Force. Burton mentioned, too, the many years of work to grow the Local First movement.

Burton then thanked the ABA staff and praised their hard work under the leadership of ABA CEO Oren Teicher.

Burton welcomed Robert Sindelar of Third Place Books in Lake Forest Park, Ravenna, and Seattle, Washington, who is succeeding her as ABA president (2017–2019), and Jamie Fiocco of Flyleaf Books in Chapel Hill, North Carolina, who was elected vice president/secretary and is starting her second three-year term on the Board. Burton also welcomed Kenny Brechner of Devaney Doak & Garrett Booksellers in Farmington, Maine, and Christine Onorati of WORD in Brooklyn, New York, and Jersey City, New Jersey, to the Board for terms ending June 2020. She welcomed also Bradley Graham of Politics and Prose Bookstore in Washington, D.C., a special appointment to the Board to serve the remainder of Sindelar’s term as director (2017–2018).

In the Report of the Chief Executive Officer, ABA CEO Oren Teicher first paused to express his sadness at the recent death of Carla Gray, the executive director of marketing at Houghton Mifflin Harcourt. “She meant so much to so many of us,” Teicher said.

After a moment of silence, Teicher began by “acknowledging and thanking the ABA Board, the independent booksellers — your colleagues — who continue to lead this association so well. I can attest firsthand that the 11 members of your board — led by President Betsy Burton — are unstinting in their efforts to ensure that ABA does all it can to help independent bookstores succeed and grow. I want to particularly thank outgoing Board members Matt Norcross [of McLean & Eakin Booksellers in Petoskey, Michigan] and John Evans [of DIESEL, A Bookstore in Oakland, Larkspur, and Brentwood, California] for their exemplary service.”

Per the Financial Report, Teicher said the auditor had once again given the association’s financial statements a clean opinion. (The 2015–2016 Consolidated Financial Statements for ABA and ABA’s 990 tax form are available to ABA members on the Governance and Finances page on BookWeb.org.)

In bidding Burton farewell from her role as ABA president, Teicher said that Burton’s “passion about bookselling, localism, and activism has no bounds.” He then expressed his thanks to the ABA staff, who he described as the “hardest working and most effective trade association staff anywhere, anyplace, anytime.”

The current retail landscape may be turbulent, Teicher said, “but amid the recent corporate bankruptcies and chain-store downsizing,” the indie bookstore channel remains healthy. Nationally, sales at independent bookstores have remained strong: In 2016, sales were up by almost five percent, and for 2017, sales are up slightly over last year’s gains, he reported. Over the past five years, through the end of 2016, the indie channel has had a compound annual sales growth of more than six percent. In the context of overall bricks-and-mortar sales numbers, this gain is “heartening — and a clear reflection of your extraordinary hard work and strategic innovation,” he told attendees.

Looking ahead, Teicher said, “It’s very heartening that as of last month, ABA has 141 provisional members — individuals who are actively working to open new stores.”

While the closing of bricks-and-mortar retail locations is accelerating in general, 87 brand-new ABA member bookstores opened for business in 32 states and the District of Columbia in 2016, a 42.6 percent increase over the number of store openings in 2015.

Indie bookselling success can be tied directly to the localism movement and bookstores’ engagement with their communities, said Teicher, noting that ABA President Burton had played a key role in starting and growing the movement. ABA’s partnerships with other retail coalitions “are working,” he noted, and they will “remain at the center of ABA’s efforts.”

Addressing booksellers’ concerns about a lack of diversity in the industry, Teicher said, “Increasingly, we can clearly see the new ideas and perspective those booksellers who are joining our ranks are bringing to our industry, especially regarding the important issues of diversity and inclusion.” He stated that ABA is committed to doing what it can to promote a more diverse bookselling community and “to working with everyone and anyone to encourage the opening of more indie bookstores in underserved communities.”

And, in the current political climate, supporting free speech and the First Amendment has “never been more important for ABA,” he said.

While national trends show indie bookstores are doing well, Teicher stressed that ABA is very aware that there are member stores in communities throughout the country that are not seeing positive results due to any number of economic or regional conditions. “ABA understands this, and I don’t think I can say it enough: We are committed to servicing all member stores, to delivering the education, professional development, and business services they need to grow and succeed,” he said. “Fulfilling that core commitment is our daily goal.”

ABA has expanded its educational programming, which included an in-depth financial workshop that was presented twice last fall and at the Winter Institute. “And we are working to improve our delivery of education through webinars and podcasts, most recently with a webinar in May that focused on helping stores create effective bookstore press kits,” Teicher said. More than 100 booksellers signed up to participate in the webinar, and a video of the webinar and related materials are available to booksellers at all ABA member stores on BookWeb.org.

Teicher also stressed that while there is more media coverage regarding the resurgence of independent bookselling, “it’s important to acknowledge and understand that we are all facing major, long-term challenges.” For one, business costs continue to increase. In the fourth quarter of 2016, retail rents had increased four percent year-over-year, he said, “and our key competitor continues to aggressively pursue a strategy of industry and economic dominance.”

The Institute for Local Self-Reliance recently released what Teicher termed a “ground-breaking study” on Amazon. “Their work makes very clear that Amazon has been unrelenting in its goal to dominate not only retailing but also a growing share of all our economic transactions,” he said. “It is an unparalleled expansion that has the potential of expanding its control into almost every aspect of our lives.” Within five years, it is estimated that one-fifth of America’s $3.6 trillion retail market will have shifted online, and Amazon is on track to capture two-thirds of that share. “Obviously, that is a significant and major challenge,” Teicher said, “but as I’ve said before, we should never underestimate our resources and capabilities.”

When the fight for e-fairness began more than 15 years ago, it was dismissed by many as a lost cause, but Teicher said, “They were wrong. As of April 1, Amazon is collecting sales tax in all 45 states that have a sales tax.” Booksellers’ considerable political influence, as part of broad coalition of retailers, won that fight, he said, and “successfully changed the political and business landscape. You did that.”

Getting legislators to tackle antitrust enforcement and consumer protection will similarly be a tough, but doable, challenge, Teicher said. But it is an “essential task, and in the months ahead, we will be increasingly reaching out to you to help ABA make the important case to elected officials that no single mega-corporation should receive special treatment.”

In the face of these challenges, ABA is very focused on its ongoing conversations with its publishing partners and will continue to urge them to address the “changing realities” of independent bookselling, Teicher stated.

Since ABA first urged publishers to rethink their business practices five years ago, many things have changed for the better, he said, including the development of such programs as rapid replenishment and simplified co-op. “And working with publishers, ABA has launched initiatives such as Indies First and Indies Introduce,” he noted, programs that recognize the unique role of the indie channel.

These conversations are ongoing, Teicher assured attendees, and pointed to Burton’s most recent “President’s Letter,” published in Bookselling This Week. In the letter, Burton noted the progress that has been made in terms of favorable backlist offers with very little restriction in terms of time or choice of titles, among other things.

Teicher also encouraged those booksellers who think these policies are good for their stores to let publishers know. “You are their customer and they need to hear from you,” he said. “Ultimately, booksellers and publishers, along with our friends in the author community, must work together to ensure that we create a sustainable business model that supports a diverse network of locally owned bricks-and-mortar bookstores. This is the channel that will ensure the discovery of a broad range of titles … by readers of all ages and tastes in all channels.”

In conclusion, Teicher said, “With your continued ideas, participation, and support, all of us at ABA will do everything we can to give you the tools and resources to succeed. No one at ABA underestimates the challenges that lie ahead, and I assure you that we remain as focused as we possibly can be on developing solutions. By working together, as we have demonstrated so often in the past, we can ensure that indie bookstores do not just survive, but thrive.”