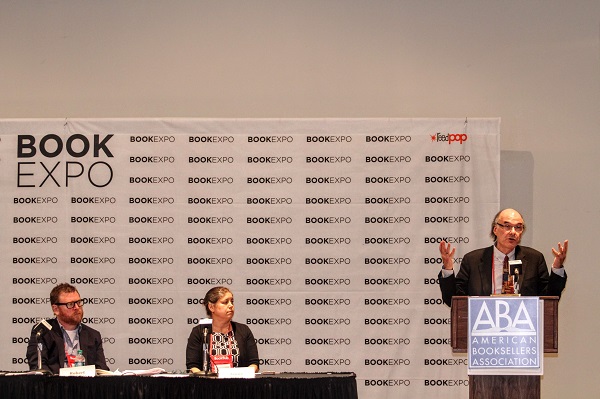 On Thursday, May 31, the American Booksellers Association convened at the Javits Convention Center during BookExpo 2018 for its Annual Membership Meeting, which included an announcement from ABA CEO Oren Teicher that the association will invest in a U.S. version of Batch, an electronic invoicing and payment system used by booksellers in the U.K., with an anticipated rollout in early 2019.

Prior to Teicher’s announcement, the meeting began with the Report of the President, Robert Sindelar of Third Place Books, which has three locations in Washington State. In his overview of the past year, his first as president of ABA, Sindelar discussed progress made and goals that ABA will continue to pursue into 2019.

First, he described the work of the ABA Diversity Task Force in addressing what inclusiveness should look like in the bookselling community. The Task Force’s efforts, including developing and collecting resources, book lists, and training practices, seek to increase diversity in staff, on shelves, and in independent bookstores’ customer base, explained Sindelar.

Sindelar’s remarks were followed by the Report of the Vice President/Secretary, Jamie Fiocco, owner of Flyleaf Books in Chapel Hill, North Carolina. In her report, Fiocco announced the results of the ABA Board of Directors 2018–2019 election of Bradley Graham of Politics and Prose Bookstore, Kelly Estep of Carmichael’s Bookstore, and Angela Maria Spring of Duende District Bookstore to their first term on the Board, as well as the reelection of Pete Mulvihill of Green Apple Books for a second term.

Fiocco thanked outgoing board members Jonathon Welch of Talking Leaves Books and Valerie Koehler of Blue Willow Bookshop for their service to ABA. She also offered congratulations to Steve Bercu, former ABA president and CEO of BookPeople, on his retirement.

Finally, Fiocco provided an update on membership numbers. She reported that there are 1,835 member bookstores, a 4 percent increase from 2017, while member locations are numbered at 2,470, a 6 percent increase. The number of provisional members rose from 141 to 168.

ABA CEO Oren Teicher began his report by thanking booksellers for their engagement and participation in ABA throughout the year. He additionally thanked the BookExpo team for their commitment to making the show useful and relevant for independent booksellers, referencing the new programming and initiatives launched by the group to deliver new value to bookseller attendees.

Teicher additionally thanked the ABA Board for its work behind the scenes to ensure that member bookstores thrive and grow. He specifically acknowledged Sindelar as well as outgoing Board members Koehler and Welch, inviting the audience to rise and applaud their service.

Per the financial report, Teicher said the independent auditing firm had once again given the association’s financial statements a clean opinion. The association’s 2016–2017 Consolidated Financial Statements and 990 tax form are available to ABA members on the Governance and Finances page on BookWeb.org. Teicher explained that these documents demonstrate ABA’s continued investments in new and expanded programming, including educational content at events and on demand, tools to aid in keeping bookstores current in a digital world, advocacy in matters of trade practices and public policy, programming for children’s booksellers, and efforts to increase the diversity of the bookselling industry.

Teicher pointed out that despite headlines announcing the “retail apocalypse,” independent bookstores have recently received much media coverage as examples of bricks-and-mortar success. Media outlets including the New York Times, the New York Post, the Chicago Tribune, and NPR’s All Things Considered, among others, have reported on the “indie resurgence,” he noted.

He highlighted, in particular, PBS’ The Great American Read, an eight-part television series that debuted on May 22. The series seeks to uncover America’s best-loved book and calls on viewers to vote for their favorite reads, and Teicher described how ABA and the producers of The Great American Read worked together to produce a range of materials to help booksellers promote the series to customers. He also expressed his excitement at the national conversation about books that the show is stimulating, as well as his hope that this conversation will take place in independent bookstores.

In addition to the recent successes for the industry, there are also challenges ahead, Teicher noted, the most pressing of which is the domineering role and disruption of the retail industry by Amazon. Citing Prime Numbers: Amazon and American Communities, a report published in April by ABA and Civic Economics, Teicher described the “alarming side effects of Amazon’s unrelenting march to be the last retailer standing,” including uncollected sales tax, empty storefronts, and displaced retail workers.

In order to “shed light on this Amazon effect,” explained Teicher, ABA has increased its in-house advocacy resources and will continue working alongside allies like the Advocates for Independent Business and the Institute for Local Self-Reliance to “make the case that no mega-corporation should be able to leverage outsized clout and secret subsidies to the detriment of local communities and small businesses.”

Teicher also highlighted the fact that, “while there may be an army of people working for Amazon, none of them have come up with an algorithm or code that can do what you do every day,” which is introducing readers to new books, building relationships with communities, and nurturing a lifelong love of books for young readers, he said.

In light of the challenges facing independent booksellers, Teicher discussed the need for “an independent business model that recognizes the vital role the indie channel plays in our industry.”

In an effort to work toward this model, Teicher reported that the ABA board voted earlier this week to invest resources to launch a U.S. version of Batch, an electronic invoicing system used by U.K. booksellers in which all publishers’ invoices can be placed in one streamlined system and appear in a standard format. According to Teicher, the increased efficiency afforded by Batch could result in more frontline booksellers on the floor interacting with customers and selling books. He called on ABA members to continue encouraging publishers to participate in Batch, and said the program was expected to debut early in 2019.

Reiterating Sindelar’s statement that ABA members are stronger together, Teicher concluded his report with a reminder that while the industry is rapidly changing, independent bookstores have faced and surpassed challenges in the past. “Our track record is clear. By working together…we can ensure that indie bookstores don’t just survive but thrive,” Teicher said, adding that “the best days of independent bookselling are ahead of us.”