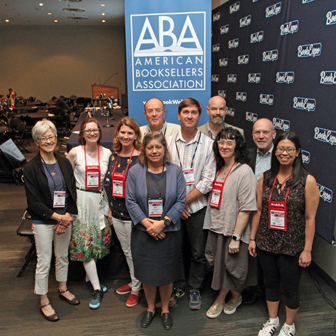 On Thursday, May 30, the American Booksellers Association convened its Annual Membership Meeting at the Javits Convention Center during BookExpo 2019.

The meeting began with the Report of the President, presented by Robert Sindelar, managing partner of Seattle’s Third Place Books and outgoing president of ABA. In an overview of his presidency, Sindelar described the rapid pace of change in the retail landscape and the evolving challenges faced by independent booksellers. He discussed three areas that signal the health of the independent channel: publisher relations, ABA education, and consumer awareness.

Sindelar named education as another important component of independents’ health. For Sindelar, the key to ABA’s success in its educational programming is communication and listening to member feedback. As an example, Sindelar explained that ABA’s recent efforts in promoting pre-sales through independent bookstores was spurred by feedback heard during ABA’s Town Hall at BookExpo in 2018. Since then, he noted, there has been a shift from only a handful of stores fulfilling pre-sale orders to many stores carrying out successful, coordinated pre-sale campaigns.

Another instance of change initiated by bookseller feedback has been the movement in ABA towards greater inclusivity. Prompted by direct member feedback, the ABA Board created an association Committee on Diversity, Equity, and Inclusion. Sindelar said that while progress has been made, ABA must continue to strive for swift change.

As Sindelar stepped down from his role as president, he expressed his gratitude for his mentors and for having had the opportunity to serve as ABA president. “I enjoyed my time at this microphone,” said Sindelar, “but I'm eager to step aside, rejoin the audience, and listen to more voices.”

Sindelar’s remarks were followed by the Report of the Vice President/Secretary, Jamie Fiocco, owner of Flyleaf Books in Chapel Hill, North Carolina, and incoming ABA President. In her report, Fiocco announced the results of the ABA Board of Directors 2019 election. Elected to three-year terms (2019–2022) as directors were Jenny Cohen of Waucoma Bookstore in Hood River, Oregon; Bradley Graham of Politics and Prose Bookstore in Washington, D.C.; and re-elected were Kris Kleindienst of Left Bank Books in St. Louis, Missouri, and Chris Morrow of Northshire Bookstore in Manchester Center, Vermont, and Saratoga Springs, New York. Graham, who had been serving the unexpired period of what would have been Sindelar’s term as a Board director, will now begin his first full term. To fill a vacancy on the Board that is the result of the recent election of Fiocco as ABA’s incoming president, the Board has also appointed Tegan Tigani of Queen Anne Book Company, in Seattle, Washington, to the ABA Board.

Fiocco thanked Sindelar and outgoing board director Annie Philbrick for their work, describing them as two people with positive, can-do attitudes. She announced, too, that voting booksellers had elected Graham of Politics and Prose to serve as ABA vice president/secretary. Fiocco introduced the board directors, who stood to the audience’s applause.

Fiocco then provided an update on membership numbers, which, she noted, had risen again in 2018, to 1,887 bookstore members in 2,524 locations.

Finally, Fiocco thanked ABA CEO Oren Teicher for his “leadership and tireless dedication” to independent bookselling and the book industry on behalf of the Board.

Teicher began his report by thanking booksellers for their engagement in ABA at the Town Hall and Annual Membership Meeting and throughout the rest of the year. Teicher also thanked the ABA Board for its work behind the scenes to ensure that the indie channel prospers and grows. He specifically acknowledged Sindelar and Philbrick, whose work he described as indispensable.

Of his retirement this year after 30 years at ABA, announced in March, Teicher said that it is the right time for ABA and the right time for him. He pointed towards ABA’s “strong footing,” including strong finances, programming, and leadership. Teicher expressed his confidence in the Board’s transparent search process for a new CEO and his plans to continue working as vigorously as he can while he remains CEO.

He additionally reported that the indie channel remains “vibrant and healthy.” Ninety-nine new independent bookstore members opened for business in 2018 across 37 states and the District of Columbia, a 32 percent increase over 2017. Further, a number of member stores opened new branches and 28 established member stores were purchased by new owners. Teicher said that meeting with new and prospective store owners during the 10 regional meetings during the spring made clear the prevalence of new models of bookselling and new innovations in start-ups.

Teicher pointed to the growing success of April’s Independent Bookstore Day (IBD) as a sign of the indie channel’s vitality. He congratulated the Northern California Independent Booksellers Association for its leadership in developing IBD, particularly Pete Mulvihill of Green Apple Books, and the more than 500 bookstores across the country that participated. He noted that “we are talking to our friends at NCIBA to develop the means to ensure IBD’s long-term viability and growth.”

Recent ABACUS numbers showed that for the second year in a row, independent bookstores have experienced a growth in positive net income, Teicher said. He asked booksellers to participate in ABACUS, explaining that increased participation is necessary to leverage the fuller power of the ABACUS data on behalf of the independent bookseller channel. The submission period for ABA’s next ABACUS report is currently underway, and the deadline for submitting responses is June 12.

Teicher also noted that sales for 2018 among ABA member bookstores increased nearly 5 percent over 2017. Further, the compound annual growth rate in sales over the past five years is 7.5 percent. While the growth rate has slowed this year, Teicher said, “we are holding on to all of last year’s gains,” and that in comparison to the U.S. Census Bureau’s sales data for bookstores — which were down 8.4 percent in the first quarter of the year — the steady sales in the indie channel “reflect strong performance in a challenging environment.”

Teicher acknowledged that despite the positive overall trends, there are bookstores and communities that are not experiencing this growth: “To those here this afternoon who are facing flat or declining sales — or whose businesses are not yet profitable — I promise you that your experience and your perspective are not forgotten or overlooked. ABA is working to provide you the best possible educational programming, the most effective technological support, and as many opportunities for networking and peer interaction as possible.”

Last year’s annual meeting, Teicher said, was set against a backdrop of headlines announcing the “retail apocalypse.” Since then, an increasing number of media reports have covered the “indie resurgence.” Ryan Raffaelli of the Harvard Business School has highlighted key aspects of ABA’s work towards assisting booksellers in making these strides, including ABA’s education and its establishment of multiple opportunities for independent booksellers to connect and network. Teicher announced that Raffaelli’s full study will be available this fall. Raffaelli will also participate in the programming for the upcoming Winter Institute, which will be held in Baltimore in January 2020.

Booksellers are already familiar with one of the insights of Raffaelli’s study, Teicher said, specifically that “challenges just don’t go away.” As the upward pressure on retail wages continues nationwide, he stated that booksellers will need a sustainable business model in order to fulfill their commitment to equitable compensation for their employees.

Teicher additionally cited rising healthcare costs as a “daunting challenge” for small businesses in the United States. He reported that work with other book industry trade associations to explore possible healthcare options for member stores continues, and that progress is being made. “While it’s still too soon to know whether we will ultimately be able to offer an affordable health care option for member stores, I can tell you that we have made significant progress, and I am hopeful that, ultimately, there will be good news to report,” he said.

Teicher then turned the discussion towards Amazon, whose growth in sales, market power, and influence, he said, continue to distort the retail industry. He stated that the strategies used by the “mega-corporation” to achieve its expansion also provide an opportunity to make a case against its monopolistic practices, particularly as the media continues to shed light on Amazon’s poor working conditions, customer concerns regarding privacy and surveillance, and the company’s “shakedown” of communities for subsidies and tax incentives.

Teicher said that ABA’s work with the Advocates for Independent Business, Civic Economics, and the Institute for Local Self-Reliance has not only garnered news coverage but has also influenced the political debate — elected officials have increasingly called for a return to intelligent and effective antitrust enforcement in the United States, and policies aimed at addressing Big Tech will likely feature as a prominent theme in the upcoming presidential campaign. Teicher pointed to Amazon’s decision to call off its plans for a headquarters located in Long Island City — for which it would have received up to $3 billion in city and state tax incentives — as a clear political and economic victory for those who favor “smart retail growth.”

In response to the recent announcement by Baker & Taylor to close its retail operation, Teicher reported that ABA has worked closely with Ingram in order to ensure all member stores have a wholesale option to acquire inventory. He said that ABA is also working with publishers to facilitate the opening of more direct accounts, and has had discussions with companies looking to fulfill the void left by Baker & Taylor.

Teicher discussed ABA’s efforts to “re-energize” Indiebound, including its work to direct pre-order sales to the independent channel, and improvements to IndieCommerce, which helped contribute to an 11 percent increase in IndieCommerce and IndieLite sales during the first four months of 2019.

To conclude his final report to ABA’s membership as CEO, Teicher told booksellers that he will be working “full tilt” until his successor is named. He said that he has seen dramatic change for independent bookstores over the course of his 30 years at ABA, and hopes “to ferment more change over the coming months.”

“After more than 30 years at ABA working on behalf of indie bookstores,” said Teicher, “I have never, ever been more convinced and believed more strongly that the best days of independent bookselling lie in front of us.”