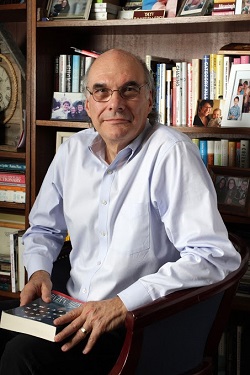 “I am deeply humbled and greatly honored to have been selected,” said Teicher. “And while I will graciously accept the award on my behalf, I know that this recognition is appropriately shared by the thousands of indie booksellers who are a part of my extended family and have given me the opportunity to work on their behalf all these years.”

Recognizing the key cultural and economic role that independent bookstores play in their communities, ABA provides information, education, business tools, programs, and advocacy for local businesses across the country, working to strengthen and expand independent bookstores nationwide, efforts that Teicher has effectively spearheaded.

Appointed to the position of associate executive director of ABA in 1990, Teicher, who will retire at the end of 2019, has also served as director of government affairs, founding president of the American Booksellers Foundation for Free Expression, and as ABA’s chief operating officer. The Literarian Award will be presented to Teicher by Ann Patchett, bestselling author of books like Bel Canto, State of Wonder, and Commonwealth and owner of independent bookstore Parnassus Books in Nashville, Tennessee.

“We are lucky enough to be at a moment where, across the nation, books are rising,” said Lisa Lucas, executive director of the National Book Foundation. “But this moment of essential recognition for books and booksellers would have looked very different were it not for enormous resilience shown by indies and the teams that support them, navigated steadfastly by Oren Teicher. We are honored to recognize his immense contributions, and we are grateful for where those efforts have taken us — a position from which we can joyfully look toward a continued, rich literary future.”

In support of the bookselling community, Teicher has emphasized the importance of the shop local movement, advocated for fair and sustainable tax laws, and worked to put the struggles and successes of independent bookstores into the public consciousness through increased media coverage and broader cultural awareness. Working closely with store owners, booksellers, and the publishing industry, Teicher has encouraged the growth of Winter Institute and Children’s Institute, further cultivating a strong and united bookselling community, and has invigorated collaborations between indies and publishers through improved sales terms and innovative marketing incentives. From 2009 to 2019, during the years of Teicher’s tenure as CEO of the ABA, the number of independent bookstores jumped from 1,651 to 2,534, with ABA membership as well as store sales increasing in lock step.

“Booksellers and the publishing world at large could not have hoped for a more passionate and effective advocate than they found in Oren Teicher,” said David Steinberger, chairman of the board of directors of the National Book Foundation. “For three decades at the ABA, Teicher has been an absolute champion for booksellers, readers, writers, publishers, and independent bookstores across the nation, and the thriving state of bookselling reflects that work.”

As CEO, Teicher was a critical force behind ABA’s IndieBound program, which helps create community among independent booksellers, connecting stores with authors, readers, and one another, and positioning indies so that they are able to better amplify the message of small businesses’ positive cultural impact.

In recognition of this work, Teicher will receive the Literarian Award at the 70th National Book Awards Ceremony and Benefit Dinner on November 20, 2019, in New York City. This is the 15th year that the Foundation has presented the Literarian Award, which is given to an individual or organization for a lifetime of achievement in expanding the audience for books and reading. Past recipients include Dr. Maya Angelou, Joan Ganz Cooney, Lawrence Ferlinghetti, Terry Gross, Kyle Zimmer, the literary organization Cave Canem, Richard Robinson, and, most recently, the Alfred P. Sloan Foundation’s Doron Weber.