Bookselling This Week recently spoke with members of the American Booksellers Association’s Diversity Task Force to come up with a list of resources for booksellers who are looking to support organizations that are helping children who have been separated from their families at the U.S./Mexico border by the Trump administration’s zero tolerance immigration policy. 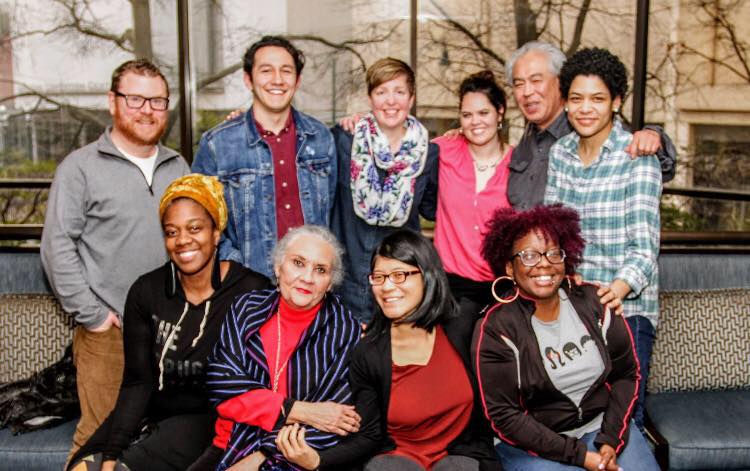 According to the U.S. Department of Homeland Security, nearly 3,000 children have been removed and detained separately from their parents since April — both from families that crossed the border illegally and from families that applied for asylum, which is not illegal.

Since media reports of the separations became widespread in June, outrage has spread across the country and the world, hastening an outpouring of donations and protests, including nationwide marches on June 30. Last month, President Trump passed an executive order to ostensibly halt the separations, and, after the ACLU filed a class action suit, a federal judge ordered the government to reunite the separated families. However, the Trump administration has already asked the court for more time to reunite children under the age of five.

In the meantime, journalists have uncovered terrible conditions at some of these detention centers, and disturbing photos and audio of children crying have been leaked to the public. In response, many people, including independent booksellers, have taken steps to help. For example, over several weekends in June, stores including Left Bank Books in St. Louis, Missouri; Print: A Bookstore in Portland, Maine; and Third Place Books, with three locations in the Seattle area, donated a percentage of their sales to organizations helping refugees and immigrants at the Mexican border.

To help booksellers continue their efforts, Bookselling This Week spoke with three members of the ABA Diversity Task Force about what else they can do to help combat the human rights abuses taking place in America’s backyard.

In the meantime, Spring, who is also an ABA Board member, said, “the best thing people can really do right now is donate money to organizations that are offering legal aid and paying bail bonds because these kids are being secreted away and we don’t know what’s actually getting to them,” including donated books. At Duende District, to coincide with the #FamiliesBelongTogether events on June 30, Spring donated 10% of her sales proceeds that day to Mijente, an advocacy and activism hub for Latinx and Chicanx organizers.

Another task force member, Denise Chávez, who owns Casa Camino Real Book Store and Art Gallery in Las Cruces, New Mexico, has been working locally on the ground level to protest at the ICE detention centers and Border Patrol office; to march and protest at the border; and to join immigrant support groups, and has gotten her city of Las Cruces to pass a resolution condemning the practice of detaining children separate from their families.

“I think it’s important to put yourself in a place of empowerment and not to lose faith but to keep going with this dogged intention to serve the world,” Chávez told BTW. “That’s what we need: to embrace our situation and not feel despair. Yes, I go to bed and I cry and I worry and I say my rosary, but at the same time I think the operative phrase here is ‘engaged action.’ Engaged compassionate action…I think booksellers need to do their homework about where to send money and to see who is doing what. In our region, the Annunciation House is our template for Right Action.”

For her part, task force member Veronica Liu, who runs Word Up Community Bookshop in Washington Heights, New York, has been working with local organizations such as Children’s Village in Dobbs Ferry, New York, after the mayor of nearby Hastings requested books in Spanish for welcome packs for the children there. But Liu recommends that bookstores that don’t have as explicit a connection to immediate immigration issues as Word Up should mainly keep their eyes and ears open for opportunities to help in their own communities, as well as nationally.

“As bookstores, we’re all community hubs: we’re places where information can be shared through people talking at your store, through resource tables and bulletin boards, the types of books you display, the information you send out, and the presence you may have,” said Liu. “But there are so many other people who need help in our area, so right now we’re just trying to do what we can locally until we know very explicitly the people who need books and where we can donate them. When we do, we can definitely meet that ask.”

Below is a list of charitable organizations, non-profits, and legal aid groups for booksellers interested in helping children who have been separated from their families:

The ACLU helps fight attacks through the legal system.

The CARA Project is recruiting attorneys, law students, and paralegals with experience in asylum work. The group asks volunteers to be fluent in Spanish or willing to work with an interpreter.

The Young Center for Immigrant Children’s Rights is looking for child advocates to visit the immigrant kids inside the detention centers each week and accompany them to immigration proceedings. The center is also raising money for advocates who will deal specifically with family separation cases.

RAICES (Refugee and Immigrant Center for Education and Legal Services) is the largest immigration non-profit in Texas. RAICES promotes justice by providing free and low-cost legal services to underserved immigrant children, families, and refugees in Central and South Texas.

Diocesan Migrant & Refugee Services, Inc.  is a ministry of the Catholic Diocese of El Paso. It is the only full-service immigration legal aid clinic serving low-income immigrants and refugees residing in the southwestern United States.

Texas Civil Rights Project is made up of Texas lawyers for Texas communities serving the movement for equality and justice in and out of the courts by providing excellent legal representation and bold strategies to respond to the needs of their communities.

The Detained Migrant Solidarity Committee in El Paso started the Fronterizo Fianza Fund, which will go toward things like posting bond for asylum seekers.

The Migrant Center for Human Rights is providing free and low-cost legal services for detained asylum seekers in Texas.

Justice for Our Neighbors provides free and low-cost legal services to immigrant individuals and families in Texas.

The Florence Project  is a 501(c)(3) nonprofit organization providing free legal services to men, women, and unaccompanied children detained by ICE in Arizona.

Annunciation House in El Paso, Texas, is one of four shelters providing hospitality to reunited families that were detained and separated by ICE in the last few months.

Hope Border Institute is an independent grassroots community organization working in the El Paso-Ciudad Juárez-Las Cruces region, that seeks to bring the perspective of Catholic social teaching to bear on the social realities unique to the region.

Circle of Health International has staffed a clinic caring for refugees and asylum seekers immediately upon their release. Their clinic in McAllen, Texas, sees upwards of 100 patients a day.

The Salvation Army of El Paso is supporting 17 shelter rooms for separated families while they await reunification with their children and their court hearings.

La Union del Pueblo Entero  was founded by Cesar Chavez and Dolores Huerta. It is a community union that works in Southern Texas’s Rio Grande Valley from the grassroots up.

Catholic Charities of the Rio Grande Valley shelters immigrants who have recently been released from U.S. Border Patrol custody.

The REFORMA Children in Crisis project delivers books in Spanish to children and youth in detention centers, shelters, law offices, and group homes around the country where immigrant youth are sent after being processed. Donations at their website are preferred so they can avoid the cost of shipping the books to the places they serve.

KIND (Kids in Need of Defense) gives books to unaccompanied children as they go into court proceedings for deportation. These kids and teens read Spanish, bilingual, and indigenous languages but books in English are welcome, too.

Authors for Families is a group of primarily debut novelists that was formed to help reunite immigrant children with their parents and combat inhumane immigration policies.

KidLit Says No Kids in Cages partnered with Kid Lit for Kids on their campaign, Writers for Families Belong Together, which supports Kid Lit’s fight against the separation of kids from their families at the U.S. border, and the work of reuniting families.

Families Belong Together is the campaign to reunify families that was behind the nationwide protests on June 30. Money donated here goes to family reunification travel expenses.

Lutheran Immigration and Refugee Service is raising money to provide immigrant children immediate shelter and beds, medical services, counseling and therapy to help them deal with the trauma of family separation.

Together Rising is collecting money that will go to advocacy groups that are working to reunify immigrant children with their families.

Comfort Cases is raising money to provide backpacks to separated immigrant children. Each case will contain items such as blankets, pajamas, toiletries, a stuffed animal, a book, a journal, and art supplies.

Neta is a Latinx-run progressive media platform telling the stories of what is happening on the border.

United We Dream  is the largest immigrant youth-led network in the country.

Women’s Refugee Commission advocates for the rights and protection of women, children, and youth fleeing violence and persecution.

We Belong Together represents women for common sense immigration policies.