At the American Booksellers Association’s Annual Membership Meeting on Thursday, May 28, at BookExpo America, ABA President Steve Bercu of BookPeople in Austin, Texas, called the meeting to order and provided the Report of the President. He announced the 2015 – 2016 ABA Board of Directors election results for officers, for two-year terms ending June 2017, and directors, for three-year terms ending June 2018 (directors can serve two three-year terms). 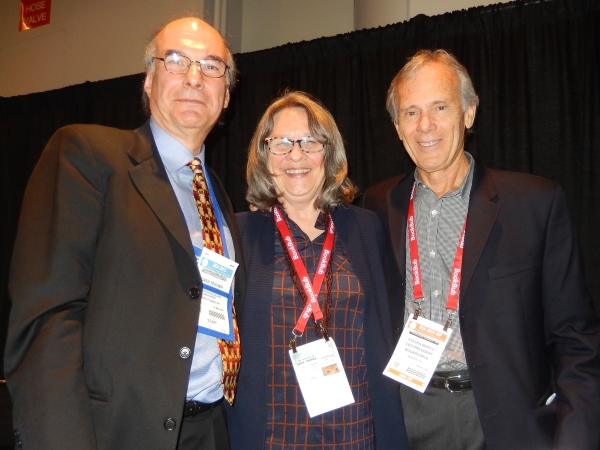 Pete Mulvihill of Green Apple Books in San Francisco was elected to a first term as a Board director; Valerie Koehler of Blue Willow Bookshop in Houston, Texas, and Jonathon Welch of Talking Leaves Books in Buffalo, New York, will both be serving their second terms beginning this year.

Bercu reported that his past eight years on the Board “has been a great experience” for him personally. Though he served through tumultuous times, most notably the economic collapse and the Great Recession, Bercu noted that indie bookselling has “moved onto better times” and important progress has been made regarding trade terms, including both rapid replenishment and longer payment terms from publishers.  He also talked about the importance of the localism movement — which has created the conditions for such successful initiatives as Small Business Saturday. “I’ve been involved in the localism movement for 10 years,” Bercu said. “And it seems most of these indie local groups are started by booksellers. It’s something we’ve benefitted from” as an association.

In closing, Bercu thanked the ABA staff for their work. “I don’t know how many of you interact with the staff, but it is a true treat,” he said.

In the Report of the Vice President, Burton noted that ABA Regular member companies now stand at 1,712, an increase of 48 stores over 2014. Calling this a renaissance in indie bookselling, she concluded the membership numbers “are great.”

In the Report of the Chief Executive Officer, which included the Financial Report, ABA CEO Oren Teicher said the auditor had once again given the association’s financial statements a clean opinion. (The 2013 – 2014 Consolidated Financial Statements for ABA and its Subsidiaries and ABA’s 990 tax form are available to ABA members on the Governance and Finances page on BookWeb.org.)

In his opening remarks, Teicher said, “I want to take a moment as we begin this meeting to recognize and thank the ABA Board. The 10 booksellers you have chosen to serve on the ABA Board devote literally hundreds of hours throughout the year to ABA, and their insight, commitment, and hard work are fully focused on ensuring the health of independent bookselling … and the success of your stores. They are a remarkable group.”

About Bercu’s service as ABA president, Teicher said, “Steve’s leadership, good humor, and keen insight regarding both the challenges and the opportunities facing indie bookselling have contributed immeasurably to so many of our successful initiatives these past several years.”

In his report, Teicher noted, “ABA’s strong financial footing has made it possible for us to pursue the association’s Ends Policies through continued investment in new initiatives and programming.”

In the 12 months since ABA’s last Annual Meeting, Teicher reported, this work has included, among other things:

Noting the continued increase in ABA membership, Teicher attributed this success to a number of factors, not least of which is booksellers’ “extraordinarily strong work. The growth and vitality of the indie channel has been achieved one community at a time … the result of untold amounts of careful planning, hard work, and clear-eyed determination by each of you.”

Another important factor in the success of indies is technology, Teicher said, and he noted that ABA is making the investments necessary to ensure booksellers have the tools they need.

Also a factor is publishers’ willingness to “rethink outmoded business practices, and to implement new policies that acknowledge and support the unique — and essential — role that indie stores play in discovery and sales,” he said. “All the data is clear … consumers are finding books in bricks-and-mortar stores.”

Teicher continued, “Four years ago, I stood before you during our annual meeting and challenged publishers to take out a clean sheet of paper and begin to design trade terms that were 21st century solutions to the significant challenges facing all of us in the book industry in the 21st century. The good news is that many have done just that … and we thank them. But we’ve only made a start.” More publishers “need to take out that clean sheet of paper,” Teicher said. “We will continue to work hard to help them to do just that.”

An additional cause for optimism, Teicher said, is the continued emergence of a new generation of booksellers. “They are here this week at BEA and with us in this room today,” he said. “Their energy, their ideas, and their commitment to the same goals and values that inspired previous generations of booksellers make this a time of extraordinary possibility.”

In concluding his CEO Report, Teicher said, “While I never underestimate the challenges we face, I remain optimistic and confident that, by working together, the best days of independent bookselling are ahead. I look forward to another year of working with all of you.”

ABA President Steve Bercu of BookPeople and incoming ABA President and current Vice President Betsy Burton of The King’s English Bookshop chaired the Town Hall, a yearly meeting that provides members with an open forum to bring questions, suggestions, and concerns to the attention of the ABA Board and staff, and to share them with fellow booksellers.

Steve Rosato, BEA show director, spoke briefly at the start of the Town Hall; one of the topics covered was BEA’s move to Chicago for the 2016 trade show. He stressed, “We know being in New York is tough, with the cost, the travel — change is good.”

In regards to comments in the trade press that the consumer portion of BEA, BookCon, was the tail wagging the dog, Rosato said, “financially speaking, BEA wags the dog,” He noted that “BEA remains the priority for us. BookCon adds value for publishers, but there is nothing on the horizon to change [the current BEA and BookCon scheduling].”

Suzanne DeGaetano, the owner of Mac's Backs-Books on Coventry in Cleveland Heights, Ohio, opened the Town Hall discussion by citing what she saw as a lack of ABA educational programming at this year’s BEA. “I value this show, and I always want ABA involved with it,” she said, adding that she attends the Winter Institute because the educational sessions are so valuable. “Over the years we have learned a lot, and I would like to see education continue [at BEA].”

ABA CEO Oren Teicher explained that in feedback from both ABA’s Education Task Force and Booksellers Advisory Council booksellers said that they wanted the association to maximize the unique opportunities afforded by BEA and to create interaction between publishers and booksellers, and, in turn, to offer educational sessions and panels at other venues, including Winter Institute, the Children’s Institute, the fall trade shows, and spring Booksellers Forums. That said, he stressed that ABA welcomes feedback from bookseller members about possible changes.

As at the inaugural Winter Institute Town Hall, the minimum wage issue took center stage for a good part of the meeting. Christin Evans of The Booksmith in San Francisco and Kepler’s Books in Menlo Park, California, reported that she recently attend the Small Business Majority Leadership summit in support of a progressive agenda for small businesses, and one of the key topics was support for an increase in the national minimum wage. “We need to be a part of the conversation,” she said, stressing that she supports increasing the minimum wage. Evans believes that workers with more money will put those dollars “back into our business.” Over the long haul, the wage increases should provide indie retailers more leverage in negotiating rent, she said, and ultimately this would shift this money from property owners to the workers.

Evans noted that the younger booksellers in her stores had worries over what a minimum wage would do to the bookstore, though she stressed that her stores were keeping up with the incremental increases. “We need to be a vocal and visible group, and engage in the discussion,” she said. “It’s not insurmountable.” Teicher said that ABA was focused on the issue, noting the association’s recently introduced Minimum Wage Legislative Tool Kit, and said the organization’s advocacy and educational efforts regarding minimum wage would continue.

Lucy Kogler, co-owner of Talking Leaves Bookstore in Buffalo, New York, brought up the issue of diversity on the ABA Board, and not just in terms of race and gender but also regarding store size. In response, Bercu stressed that this was an issue the Board was actively focused on, and he pointed out that anyone in the ABA bookstore membership can nominate candidates for the Board elections. He encouraged members to get engaged in the nomination process. “There is no reason for anyone to not nominate anyone; there is plenty of opportunity to do so,” Bercu said.

Chris Doeblin of Book Culture in New York City raised the issue of trade terms between publishers and booksellers. “I feel like our industry is adrift,” he said. “We haven’t taken a position on where we want this industry to go. Are there any limitations?”

“This is a continuing conversation,” Bercu noted, adding that publishers acknowledge the importance of the indie bookstore channel and understand fully that “we create numerous sales that we do not get.”