The American Booksellers Association’s Town Hall meeting at BookExpo 2017, held on Thursday, June 1, just prior to the association’s Annual Membership Meeting, offered booksellers a forum in which to share their comments, questions, and concerns about the association and the book industry at large with the ABA Board and staff. 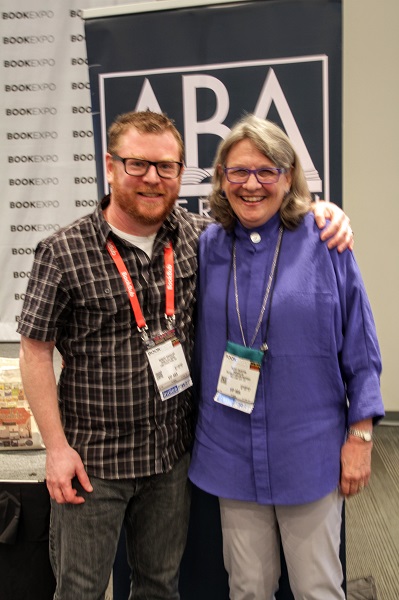 The Town Hall meeting was facilitated by outgoing ABA President Betsy Burton of The King’s English Bookshop in Salt Lake City, Utah, and incoming President Robert Sindelar of Third Place Books, which has three locations in the Seattle area.

BookExpo and BookCon Event Director Brien McDonald began the Town Hall by welcoming questions from booksellers about the show. Concerns raised by attendees included the prominence of BookCon over BookExpo and the number of exhibitors at the event.

“We want to take a lot of focus on BookExpo and bring booksellers back into the building, as many as possible, bring them face-to-face with publishers for meaningful interaction,” said McDonald. “The idea is to get back to the core of what BookExpo should be, and the people in this room are exactly that.” Commenting on BookCon, he said, “What we’re doing at BookCon is very clear. We’re creating a large-scale media spectacle where you bring fans together with publishers. So that’s a clear-cut thing.”

Regarding the impression of a lack of exhibitors, both in the number and diversity of the types of services offered, McDonald said that exhibitor numbers are strong and up over last year’s show in Chicago. “We’ve made some choices around our attendance strategy and who we’re bringing in, and therefore that’s brought in a different set of exhibitors,” said McDonald, but Reed, which coordinates BookExpo, will look into pursuing more diverse types of exhibitors.

Provisional ABA member Doloris Vest, who is opening a bookstore tentatively called Book No Further in Western Virginia, came to BookExpo in hopes of hearing advice from established booksellers — and to make sure that opening a bookstore is a wise thing to do.

Sindelar said that during this year’s meetings between ABA and publishers in New York conversations turned to programs that publishers are offering to help new booksellers. “Most of them have one in place now or are developing one,” he said. “Talk to your publishers — publishers want to see more physical bookstores in the United States. They’re aware that there are plenty of places that need them and they’re trying to do what they can to help.”

Bob Sommer of Changing Hands Bookstore in Phoenix and Tempe, Arizona, encouraged new and prospective booksellers to visit the ABA Bookseller Forums on BookWeb to see what booksellers are talking about or to ask questions of their own.

Camden Avery of The Booksmith in San Francisco, who shared comments on behalf of himself and his colleagues at the bookstore, encouraged fellow bookstores to “take responsibility for the role they play in being custodians of free thought as booksellers.”

“I think our industry recently has tended to view its position in the world as essentially apolitical,” said Avery. “I would like to insist and to urge all of you to consider that bookselling is appropriately and necessarily a site of political significance. Bookstores are inherently sites of activism exactly because of the possibilities mandated by independent thought and the possibilities books open up for different ways of being.”

Avery also thanked ABA for following up on recent calls for more diversity in the book industry and in the trade organization. “That said, it’s also important for me to point out that the fact that I’m standing here today addressing an ABA Board represented by white faces is frustrating and puzzling to a lot of my colleagues back at home. If we want bookselling to retain a place of cultural prominence and value, it’s our job right now to foster and cultivate diversity in books and bookselling completely, from top to bottom, and we need to demonstrate that we’re taking that job seriously,” said Avery.

On the issue of activism, Burton responded, “You’re absolutely right, but one has to remember that we are independent booksellers and we all have individual points of view about these things, and we each have a right to make our own choices about how we deal with those issues. I think that’s equally important.”

The steps that have been taken toward growing diversity are indeed first steps, said Sindelar; it’s not the end of the conversation, but rather the beginning. The new Diversity Task Force, launched by the ABA following Winter Institute in January, had its first meeting on June 2 at BookExpo and will be reporting the results of that meeting at the next board meeting, said Sindelar.

Sindelar also encouraged booksellers to read Bookselling This Week to learn about what the task force is working on and to stay in the loop about the board nomination process. “In terms of getting more diversity on the board here or on a regional organization, the more that our membership can be aware of the processes that are in place to do that — how to nominate people to the board, what that timeline looks like — all of that information comes in Bookselling This Week,” said Sindelar. “The board needs to be part of that process and take ownership and responsibility, but we need your help as well.”

Burton noted that five new members have joined ABA’s Booksellers Advisory Council (BAC), which provides booksellers with some of the experience required to join the ABA Board. “Putting people in place to provide candidates for the board was a very important step,” she said.

John Bennett of Fieldstone Book Company asked if the ABA Board had looked into expanding the organization’s membership by allowing alternative types of stores to join, such as used bookstores, online-only stores, or stores that only operate events. “If you had a larger membership, you’d have more ability to diversify the board and this organization,” said Bennett. “If you have more members, you have more opportunities to diversify the voices you’re hearing.”

“As long as they sell books, we do encourage membership from every corner and every quarter, and we do try very hard to get members to join,” said Burton. “If you have any suggestions about how to do that that we’re not following up, I’d love to hear them.”

Each year, the members of the ABA Board make calls to dozens of bookstores to encourage them to renew or join. “We’re aggressively trying to grow the membership. We want to represent everyone who’s in the business of doing what we do, to be a part of it and to be a voice at the table,” said Sindelar, who asked that booksellers notify the board of anyone they know who should be contacted regarding membership.

Rozanne Seelen of The Drama Book Shop in New York City, which is celebrating its 100th anniversary this year, has seen many changes in the business over the years, she said. Of concern to Seelen is the consolidation of publishers under one umbrella, and the associated bill that comes along with it each month, rather than being able to spread out payments to many publishers. “I really believe in what we do. We do books, while these large places do products. As long as we can hang on together, we will, I think, promote books. I hope to see that as long as I live,” Seelen concluded.

The consolidation of publishers is something outside of the control of the ABA Board, said Sindelar, but conversations are taking place with individual publishers about dating and the different challenges stores have when it comes to paying their publisher bills. “My sense is some of the biggest players out there have some sensitivity to that,” said Sindelar. “Getting their finance department to talk to their sales department sometimes is a little bit more of a challenge… We’re going to continue working on that because we’ve heard that from other members as well.”

Lucy Kogler of Talking Leaves Books in Buffalo, New York, asked about a recent e-mail from ABA about the organization’s White Box mailing.

In order to qualify for the White Box mailing, explained ABA CEO Oren Teicher, from the beginning booksellers have been asked to do several things in return, such as reporting to the Indie Bestseller List and nominating books to the Indie Next List. “That communication was simply reminding booksellers that the box comes because stores earn it, and we wanted to remind people that we hope they will continue to participate,” said Teicher.

Publishers participate in the White Box mailings by contributing galleys and ARCs for inclusion, with the hope that booksellers will read them, then nominate them to the Indie Next List and hand-sell them in their stores, said Sindelar. “For us to say that this is how this wheel turns and please participate in some way, I think that’s a reasonable request,” he said.

Sindelar asked the members in attendance for feedback about the change in BookExpo that shifted some bookseller programming to the day before the show, this year Wednesday, May 31, including Meet the Editor, a Publicists Speed Dating session, and the Celebration of Bookselling Lunch. “There was an effort to have a full, meaningful day of programming for booksellers,” he said.

Booksellers in the room responded positively to the change, but Lacy Simons from hello hello books in Rockland, Maine, asked if it would be possible to have earlier notification about the events planned for BookExpo to help with coordinating travel plans.

Ashanti White-Wallace of WORD, which has locations in Brooklyn, New York, and Jersey City, New Jersey, asked if ABA had ever considered offering reduced membership fees, especially for new stores, for booksellers who attend events and trainings or offer their skills to complete work on behalf of ABA or the board.

“For new stores, [the membership fee is] a lot, so I do feel like there are some ways that ABA could be subsidizing that,” said White-Wallace. “I know I don’t have a lot of extra time, but I would gladly set some time aside to make this organization better. I’ve been a bookseller for 10 years, since I was 18, and I really care about this industry and I don’t want to do anything else, but it gets harder and harder to do that.”

The board will consider White-Wallace’s suggestions, said Burton. Sindelar noted the conversations that have taken place about bookstore mentorship programs and publisher funds for new stores and pointed to the scholarships for ABA’s Winter Institute and Children’s Institute, which are often awarded to new and prospective booksellers. “That kind of stuff is very much on the table,” said Sindelar. “Having more stores and trying to decrease the resistance in opening a new store is very much in ABA’s interests.”