Across the Pond, Readers Head to Bookstores for Bibliotherapy

While U.S. booksellers celebrate Indies First on Small Business Saturday on November 25, bookshops in the United Kingdom and Ireland will mark Sanctuary Saturday.

This is the second year for Sanctuary Saturday, which encourages the public to visit a bookstore for a peaceful shopping experience.

“It’s about going into a bookshop as a place for sanctuary, as a place that’s calm, where you can have a real conversation with a bookseller. If you want to do some thoughtful Christmas shopping, that’s the place to go,” said Meryl Halls, the head of membership services for the Booksellers Association of the U.K. and Ireland (BA). “We’re encouraging them to do things like hand massages or have music on or aromatherapy candles or that sort of thing.” 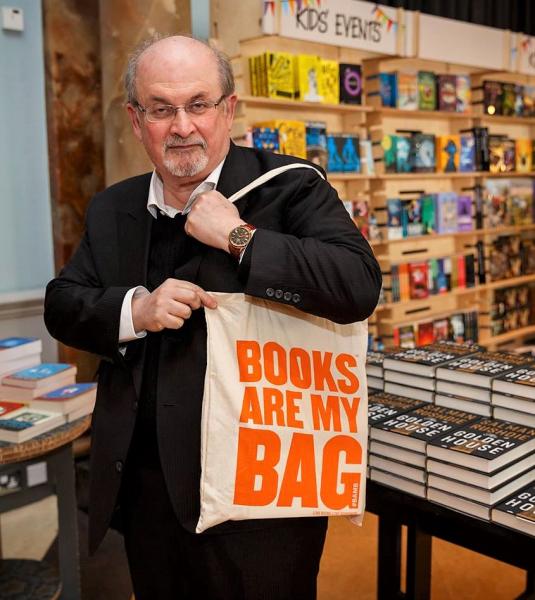 Salman Rushdie poses with a Books Are My Bag tote.

Sanctuary Saturday is under the umbrella of the BA’s Books Are My Bag campaign. The BA is promoting it on social media with the hashtags #SaturdaySanctuary and #Bibliotherapy. “It’s another opportunity for us to talk to consumers about how brilliant bookshops are at a crucial point in the year,” Halls told Bookselling This Week.

Books Are My Bag began in 2013, the same year the American Booksellers Association launched Indies First in the United States. “Books Are My Bag is a year-round campaign to promote bookshops to consumers,” Halls said.

The main event for the Books Are My Bag campaign is Bookshop Day, which falls on the Saturday after what’s known as Super Thursday in the U.K. publishing world. Super Thursday is the day of the year when the most books are published and also the start of the holiday selling season.

This year’s Bookshop Day was on October 7, and involved 2,000 bookshops. The BA sent booksellers marketing kits similar to those provided by ABA for Indies First; the BA kits included bunting, balloons, T-shirts, posters, and bookmarks.

The BA also amplified the event on social media with the hashtags #MyBookshop and #BookshopDay.

“Like with Indies First, the booksellers deliver the on-the-ground stuff that’s happening in the shops,” Halls said.

Since its inception, the Books Are My Bag campaign has had as its focal point an iconic bright-orange block print canvas bag designed by U.K. advertising giant M&C Saatchi.

“The bag was a fairly effective way of creating a physical item that you could only get in a bookshop,” Halls said. “The bag acts as a badge of your love for books and an advert for the campaign.” 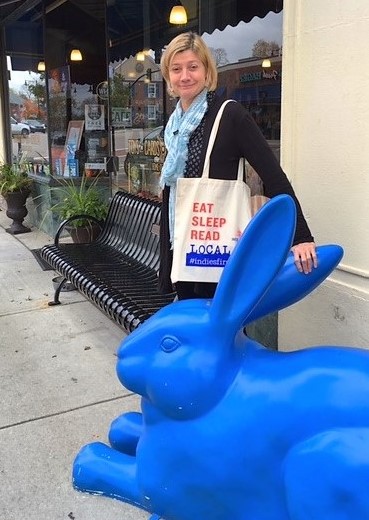 Margie Leonard at The Blue Bunny with an Indies First bag.

Those photos were the inspiration for the American Booksellers Association to snap photos of authors and booksellers holding its Indies First bags.

Bookseller Margie Leonard, general manager of The Blue Bunny in Dedham Square, Massachusetts, snapped a picture of herself this week with an Indies First bag she received in a mailing from the ABA for this year’s celebration. “Receiving the bags was a fun surprise,” Leonard told BTW. “We’ll use them as promos on Indies First — maybe as a gift for purchases over $75 while supplies last.”

In recent years, the BA has also released a limited-edition bag created by an artist or designer. While the standard Books Are My Bag canvas totes are usually given to customers by booksellers for free, the collectible bags are sold to shoppers for £10 to £12 (about $13 to $16 U.S. dollars), Halls said. 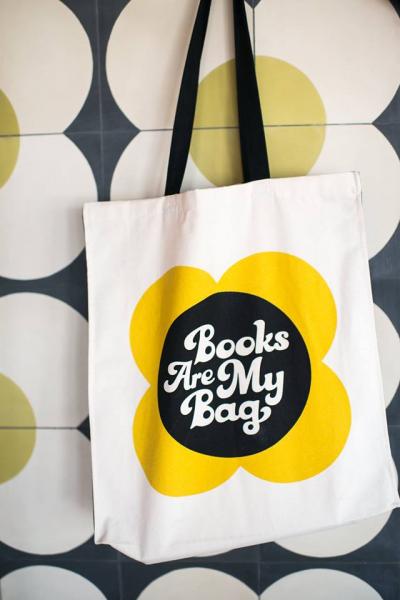 This year’s collectible bag was designed by Orla Kiely, an Irish fashion designer based in London. Children’s book illustrator Axel Scheffler created a children’s bag featuring the characters of Pip and Posy from his series of toddler books under the Nosy Crow imprint. This year, there are also bags in Irish and Welsh.

The BA is celebrating its one millionth bag in circulation among the British public with a contest to win an array of prizes, including afternoon tea at Claridges in Mayfair, limited-edition and signed books, and tickets to events.

Shoppers were asked to tweet #oneinamillion and say what their favorite bookshop is and why. The winner will be announced in time for Sanctuary Saturday.

Also closing in time for Sanctuary Saturday will be the Books Are My Bag Readers Awards, which asks the public to vote on a short list of books selected by booksellers to win tokens to spend in bookshops.

This hum of activity as the holiday shopping season gets under way keeps Books Are My Bag in the public’s consciousness, Halls noted.

“The Saturday Sanctuary event at the end of November came about because we wanted something to keep the campaign activity going through Christmastime,” Halls said.