Independent booksellers across the nation have named Sky in the Deep by Adrienne Young (Wednesday Books) as a top choice for the Summer 2018 Kids’ Indie Next List. 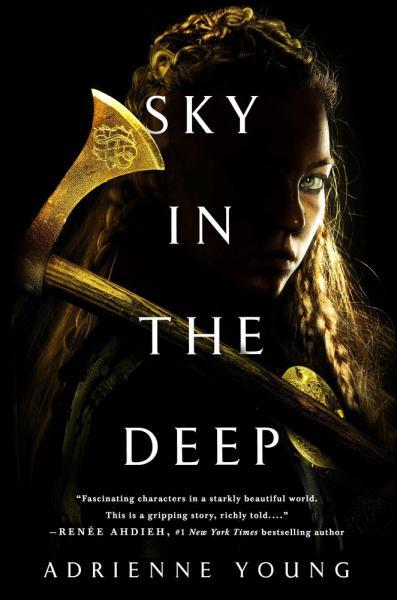 Young’s New York Times bestselling debut is a Viking-age inspired fantasy about loyalty, love, betrayal, and family. The novel follows 17-year-old Eelyn, a member of the Aska clan, which has been fighting the Riki clan for as long as either side can remember. One day, Eelyn sees her brother, Iri, who was thought to have died in battle five years earlier, fighting with the enemy. Though reeling from her brother’s betrayal, Eelyn is swept up in an adventure in which she finds love, learns tolerance, and is instrumental in the two clans coming together to fight a mutual enemy.

“Sky in the Deep is the YA fantasy I’ve been waiting for — a breath of fresh air that holds the reader captive from the opening scene,” said Sarah Green of Vero Beach Book Center in Vero Beach, Florida. “Be warned, you will fall hard for Eelyn and Fiske. You will swoon, you will gasp, you will laugh, and you will cry; this book touches on all the emotions. In a brutal, bloody world, Young pulls no punches when putting the characters in intense situations that leave the reader on the edge of their seat. With lush descriptions, impactful character development, and powerful writing, this debut author will have you clamoring for more of her words.”

Here, Bookselling This Week speaks with Young about her debut novel. 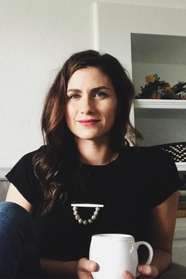 Bookselling This Week: What was the origin of the idea for this book?

Adrienne Young: The original idea was really sparked from the brother/sister relationship: the betrayal between the siblings, Eelyn and Iri. I didn’t originally set out to write a Viking book; my initial inspiration was these two siblings. As I started to write, even in the first scene, it started to take a Viking shape, so I wound up leaning into it. But it all started with that conflict between the brother and the sister.

I really liked writing that relationship because I feel like a lot of times in YA all of the actual relationship focus is put on the romantic storyline, and I wanted to explore family and especially the sibling dynamic. Once I got the idea, I was intrigued by that.

BTW: Did you research Viking culture, customs, mythology, and gods? Was the book influenced by any other cultures or myths?

AY: I did a ton of research. I’m a research junkie and I love reading about history, so I already had a reservoir of knowledge about the Nordic people, but once I started getting into the book I had to do a lot more research. Really, the things that are directly reflected in the book from that research are the clothing, the food, and the landscape — a lot of the social and cultural stuff. I used Norse mythology as a foundation, kind of like pillars, but all of the mythology in the book and the political structures were created by me. I definitely used all of it as a heavy influence, but a lot of it, too, is just created.

BTW: The descriptions of fighting and weaponry in the book read as very realistic. Did you also research combat techniques? How did you choreograph those kinds of scenes?

AY: I love action scenes — I love to watch them in movies and read them in books. People ask me that all the time: how did you write these action scenes? And I don’t know, I just see them in my head. I do have favorite action scenes that I’ll watch if I am stuck or feeling like I don’t have a vision, and that gets me back grounded into the sights and sounds of fighting and the feel of it. One of them is Game of Thrones — they have great battle scenes that are done really well. I watch things that inspire me and get me in the mood to write action, but I also try to pay close attention to things like keeping track of where weapons are and weight distribution — like, could you actually drive a sword through someone if you didn’t rear back first and throw it forward? I don’t have any fighting experience or anything like that, but I am a big fan of action done well.

BTW: What are some YA books and authors that have inspired you in your writing?

AY: One of the most inspirational books was Daughter of Smoke and Bone by Laini Taylor [Little, Brown and Company]. She is just phenomenal; she brought together all of the things YA readers love about story and then also brought really great writing. That book was an inspiration to me because my writing is more lyrical and a lot of YA writing isn’t like that, so I wondered if it had a place five or eight years ago, when YA was a lot of vampires and dystopian and all of that. That is all stuff I love to read, but I wondered if my style of writing had a home in YA.

Also, Leigh Bardugo’s world-building is just huge for me. She’s got this whole universe thing going on that is done so well and has changed the way I look at world-building, for sure.

BTW: In the book, the Riki and Aska come together to fight a common enemy, the Herja, whereas the two clans were enemies before. Were you thinking of any greater meaning in today’s global context?

But then I was also really impacted by what has been going on in our country and in the world over the last couple years. The book definitely carries a lot of those themes of hating people because the gods hate each other, of looking at people who look different or live differently than us and not being able to find a common ground even though we have many. That very much made its way into the book.

BTW: Did you have any particular literary or YA characters in mind when you were creating the character of Eelyn?

AY: One character I love and I had read pretty recently before I wrote Sky in the Deep was Inej from Six of Crows [by Leigh Bardugo, Henry Holt & Co. Books for Young Readers]. I loved her because she didn’t have to prove to the reader or to the other characters in the story how strong she was, she just existed as she was, and I really, really loved that. I think that’s a pretty unique thing to pull off in YA. I definitely had that in mind when I was writing Eelyn: to make sure that she wasn’t having to prove anything and was existing as she was.

BTW: Can you tell readers what you are working on next?

AY: I’m actually working on a companion novel to Sky in the Deep, and that comes out in 2019. We haven’t released any details about it yet, but it’s the same world, different characters. There is a character from the first book who is a focus, and I think people who like Sky in the Deep will be really excited when they hear what it’s about.