This week, Midtown Reader in Tallahassee, Florida, announced the launch of “Re-book to Re-build,” a profit-sharing weekend to help rebuild three school libraries in the state’s Panhandle and Big Bend area that were severely damaged by Hurricane Michael. 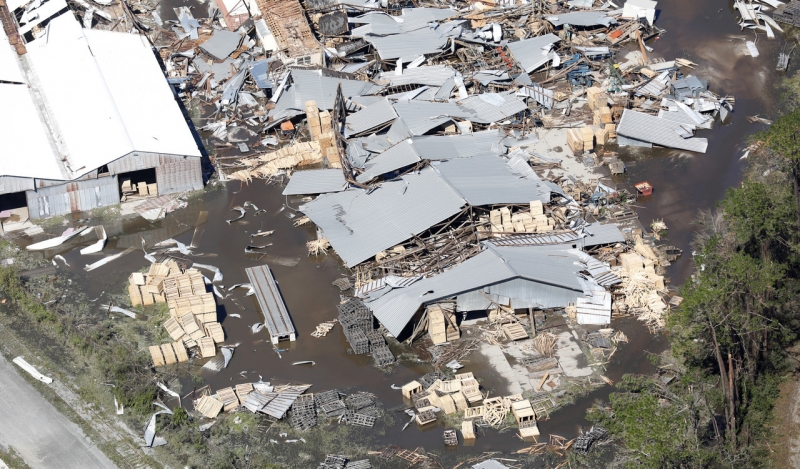 A view of the destruction from Hurricane Michael near Panama City, Florida (Photo courtesy of U.S. Department of Defense)

The hurricane hit Florida as a Category Four storm on October 10, with sustained winds of 155 miles per hour, particularly devastating the areas of Panama City, Mexico Beach, and small towns just north of the Gulf Coast. The storm then weakened, heading up the southeastern coast to Georgia, South Carolina, North Carolina, and the Mid-Atlantic states. Meteorologists have estimated that Hurricane Michael was the strongest storm on record in the Florida Panhandle and the third most intense Atlantic hurricane to make landfall in the U.S.

In Midtown Reader’s case, owner Sally Bradshaw said, Michael’s wrath closed the store for four days and floodwaters destroyed its server computer. However, the store was able to recover everything since they had backed up their inventory data. After reopening, their first thought was what they could do to help those whose outcomes were not as fortunate.

“We had so many people coming into our store saying, how can we help, how can we help,” said Bradshaw, “and we’d been debating what our individual store could do, whether it was to get specific books, ask our customers to purchase books that we would match, or give a percentage of sales to these schools that had been damaged.”

Midtown Reader contacted the Florida Department of Education, which has a direct support organization called the Florida Education Foundation that maintains a hurricane fund to help resupply schools that are damaged in a hurricane or tropical storm. “We’re partnering with them to raise funds to restock and replenish school libraries that were damaged in Hurricane Michael,” Bradshaw said. “We’re giving them a percentage of our sales the weekend of November 3 and 4, and we have reached out to all of Florida’s independent bookstores to ask them to join us.”

According to the state’s department of education, three school libraries in particular were significantly impacted by the storm: Blountstown Elementary in Blountstown in the Panhandle, north of Panama City; Jinks Middle School in Panama City; and Mosley High School in Panama City. The profits from these “share days” will go directly to the hurricane fund so that the department can target its resources specifically to what these schools have lost; the store’s goal is to help, said Bradshaw, not create more work.

Since sending out an e-mail to all Florida independent bookstores on Sunday night, Bradshaw told Bookselling This Week that she has already heard from several stores that have agreed to participate, including Books and Books in Coral Gables, Story and Song in Fernandina Beach, Inkwood Books in Tampa, Bayou Book Company in Niceville, and Macintosh Books and Paper in Sanibel.

“We would love for any bookstores, in Florida or anywhere in the country, to get in touch with us — the more the better,” Bradshaw told BTW. “This area is called Florida’s forgotten coast because it’s not as densely populated as some other areas in the state, but it’s an area that has suffered a terrible tragedy. We really wanted to raise awareness of what these schools are going through, and this was, we felt, one way we can hopefully make a difference. Any bookstores around the country who are interested in joining us are welcome; that would be terrific.”

Midtown Reader will be providing the Florida Department of Education with a list of participating bookstores so that they can work directly with them on specific donations, said Bradshaw, as well as collecting gently used books, which will be delivered to the Department of Education. The store will also reach out to publishers to work with the fund and the schools to provide deep discounts for the purchase of new books once school libraries are back up and ready to receive them, Bradshaw added.

“Bookstores are frequently community hubs and serve a very diverse variety of readers, so we feel like this is a terrific opportunity for us to give back to our community,” Bradshaw said. “We were so lucky and so fortunate not to have the damage that some of our neighboring communities had, so this is an opportunity for us to step up. We’re hoping that, in some small way, we can be impactful in helping students in these schools that were damaged due to the storm.”

Bradshaw said that any store in the U.S. that is interested in participating in “Re-book to Re-build” can e-mail her or call the store at (850) 425-2665. In addition, the Book Industry Charitable Foundation (Binc) is looking to hear from bookstores in the affected area that need immediate financial or recovery assistance. Booksellers who need help can contact Binc toll-free by calling (866) 733-9064 or by e-mailing or texting to help@bincfoundation.org.