The American Library Association’s (ALA) Office for Intellectual Freedom has announced its 2017 list of the books that were most frequently banned or challenged in schools or libraries in the past year. The 2017 list was released on Monday as part of the State of the America’s Libraries Report 2018, which summarizes library trends and is released annually during National Library Week, April 8–14. 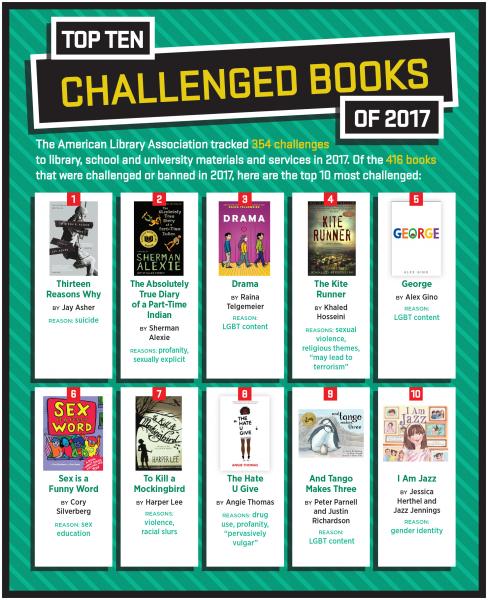 ALA tracked 354 challenges to library, school, and university materials and services in 2017; some of these challenges resulted in requests to restrict or remove multiple titles or collections. Overall in 2017, 416 books were targeted, according to ALA. The top 10 challenged books of the year were:

6. Sex is a Funny Word by Cory Silverberg and illustrated by Fiona Smyth (Triangle Square)

7. To Kill a Mockingbird by Harper Lee (Harper)

8. The Hate U Give by Angie Thomas (Balzer + Bray)

10. I Am Jazz by Jessica Herthel and Jazz Jennings and illustrated by Shelagh McNicholas (Dial Books)

Booksellers can find additional reasons as to why these books were challenged, a Top Ten List video announcement, and infographics to publicize this year’s list on the ALA website. This year’s Banned Books Week, the national celebration of the freedom to read, will be held September 23–29, 2018.