Old Harbor Books in Sitka, Alaska, will celebrate its 40th anniversary with a festive party on Saturday, May 7, featuring giveaways, cake, balloons, prize drawings, and a special look back at the store’s history.

Set on an island with 9,000 year-round residents, Old Harbor Books was established in 1976 as a collective by three local couples who were its first shareholders and board: Lee and Linda Schmidt, Chuck and Alice Johnstone, and Don Muller and Mary Stensvold. Today, the business is still owned by most of its original founders as well as by the Schmidts’ son, Roger, and daughter, Laura. It sells a broad selection of new books, which include a substantial Alaska tourism section, as well as numerous sidelines and collectibles.

Don Muller, who oversaw Old Harbor’s operations until 2011, when he sold his shares and retired, told Bookselling This Week that he is most proud of the store’s legacy of conservation efforts, which began with its founding, as well as its much later anti-Iraq war efforts.

In the 1970s, two major pulp mills in southwest Alaska were destroying huge expanses of old-growth forest through industrial logging, he said, adding that many of the trees were more than 500 years old.

“It’s the biggest national forest in the United States, and we were actively involved in trying to save as much as of it as possible,” said Muller, whose background is in biology and chemistry. “One of the reasons we opened Old Harbor Books was not only to have a good bookstore in the community, but we wanted to be a factor in community decisions.”

Inspired in part by the activism of three California bookstores — Kepler’s Books, City Lights Bookstore, and the now-closed Cody’s Books — which Muller called his “bookstore heroes,” Old Harbor disseminated information and worked to stop the forest’s destruction. In 1993, the mills closed, he said. 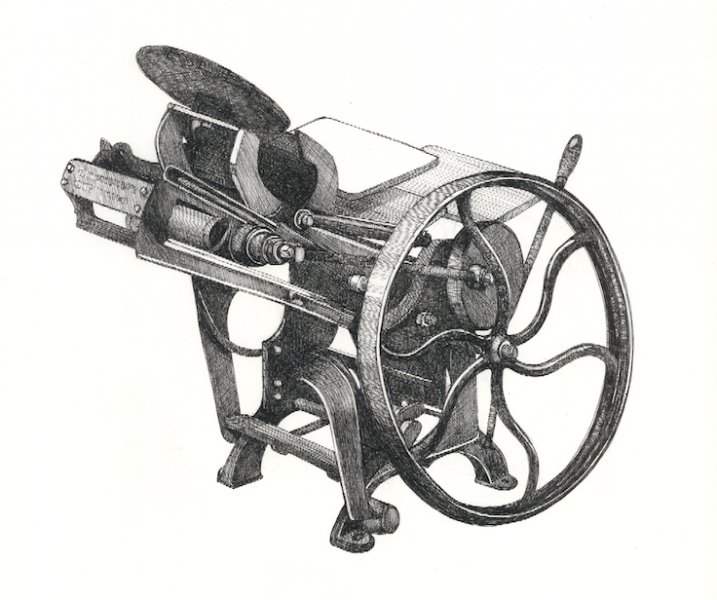 For this Saturday’s celebrations, Old Harbor’s current manager, Ashia Lane, went through its storeroom to put together a chronological display of photographs, advertisements, and memorabilia for customers to peruse. Among the items on display are broadsides of poems that were printed using the store’s 1895-era Chandler and Price printing press, which was in regular use until the 1980s.The party will also be a veritable “This Is Your Life” of people from the store’s past, with music provided by the band that performed at the store’s 10-year anniversary party. Also attending is one of the store’s original paying customers from 1976.

“That kind of, for me, lets you know what a great community this is,” Lane said.

Lane, the fourth manager in the store’s history, said that at first, she wasn’t sure if people would take interest in the anniversary, but was very pleasantly surprised once she reached out.

“I posted a Facebook event (we’re pretty reliant on that here), and I already have a ton of people who plan on coming in and people who are asking about it at the store,” said Lane. “We’re expecting a sizeable crowd.”

Over the past 40 years, the store has remained stalwart in the face of many changes in the book industry, including the rise of chain and online retailers, the advent of e-books and e-readers, and publisher consolidation. In 1980, the store’s owners purchase an historical building and moved Old Harbor down the block, a move that Muller credited as one of their best decisions. Muller also fondly remembers being among the bookstores chosen to test ABA’s computerized ordering system prototype in 1992.

“We hope to have things continue for another 40 years,” Muller said. “It’s amazing, really. I have no doubt that real paper books will stay around forever.”

Muller added that he and the other founders and current owners are thankful for Lane’s efforts over the past three years on a number of store improvements, including changing the logo to the store’s own printing press and using it as a centerpiece for marketing, replacing the original carpet with wooden flooring, putting the bookshelves on wheels so they can be moved for readings and signings, and repainting the walls.

“Ashia has got the courage and strength to do what is a really difficult job these days,” said Muller. He also thanked former staff member Marylin Newman, who passed away last week. She was a “perfect bookstore employee,” he said, “and though she wasn’t one of the original stockholders, she stayed with us for about 25 years.”