Set during the Mexican Revolution in 1913, Barefoot Dreams of Petra Luna follows twelve-year-old Petra Luna as she travels to cross the U.S. border with her family. 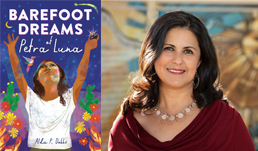 Brein Lopez of Children’s Book World in Los Angeles, California, served on the panel that selected Dobbs’ debut for Indies Introduce. He said, “Alda P. Dobbs has gifted her future readers with a much needed Mexican and American history, brought to life vividly in the death-defying journey of Petra and her familia. This suspenseful and inspiring story of war, migration, and the determination of one young girl has left me excited for Petra’s future.”

Dobbs was born in a small town in northern Mexico but moved to San Antonio, Texas as a child. She’s as passionate about connecting children to their past, their communities, different cultures, and nature as she is about writing.

Here, Lopez and Dobbs discuss the process of crafting emotionally-resonant stories for children.

Brein Lopez: Petra's thrilling story of survival amid the Mexican Revolution is based in part on the childhood experiences of your great-grandmother, as well as the histories of many of your young readers' ancestors. Why was it important to you to tell this collective story to young readers today, particularly through the eyes and dreams of Petra Luna?

Alda Dobbs: Petra’s dreams and her way of seeing the world are often at odds with her grandmother’s views. Young readers will see how differences in perspectives between generations is universal and transcends time. However, in these differences, young people can also find wisdom and strength to face ongoing challenges. I also hope young readers realize that they, too, have the power and determination to be a leader like Petra. Sometimes we adults don’t give children enough credit, yet they are capable of so much if given the space and confidence to grow and figure things out on their own. I also want them to realize that no matter the circumstances, they, too, can look to their dreams for guidance and strength during dire times.

BL: Petra's perilous family journey to hopeful freedom and safety takes place over 100 years ago but reflects the lived experiences and journeys of many immigrant children today. How did you go about researching and uncovering these hidden histories? Did you discover connections between those past struggles and the present realities of refugee families today?

AD: I read wonderful academic works that gave me a sense of the cultural, political, and social climate of the time. Many of the characters, scenes, and themes in Barefoot Dreams of Petra Luna were inspired by family stories and by brave journalists who interviewed rebel forces during the Mexican Revolution. I also read interviews of veterans and memoirs of people who had been children during the conflict. My favorite research tool were old photographs. On my Instagram account, you’ll see the photographs that inspired me most during my research, each with a tidbit of history. In my research, I found many connections with the present. I read stories that matched those I hear today of people, especially of unaccompanied children, fleeing the violence in their homelands. For instance, I once found an old photograph of migrants walking down railroad tracks in Mexico, with nothing but the clothes on their backs and faces full of angst. Later, I came across a recent photo full of color that depicted migrants walking down a set of tracks with the same dread and fear on their faces. The resemblance of both pictures, despite having been taken over 100 years apart, blew my mind. My own great-grandmother’s story of desperation and survival could also be seen in the recent images of Afghanis scrambling to leave their devastated country.

BL: Petra encounters many models of female experience throughout her journey, from her Abuelita's traditional expectations of marriage, her friend Adeline's freedom to be educated, the maternal caregiving of Luz for her baby, Chencha, among the camp followers, and the warrior spirit of Marietta, a soldadera leader of the Revolución. What did you discover in your research about the experiences of young women at this time and how did that impact Petra's path building in your story?

AD: The Mexican Revolution was a fight for land and freedom, but women in it fought for their rights, too. The lives of women and children revolved around a society wrought with racism, classism, sexism, and violence. In my research, I discovered the various roles women and children played in the revolution. There were soldaderas, the women who followed their soldier husbands or family members into battle, making sure they were fed and cared for. There were women warriors, soldadas, who picked up arms and joined the federal government or fought amongst the rebels, with some rebel women attaining ranks as high as general. Most young women, however, were like Petra and her family — too old, or too young to fight. Their strife was different. It involved persecution, forced inscription, famine, and the destructive elements of the desert. Their pursuit was survival and the peace offered north of the Rio Grande River. Unfortunately, many young women in Latin America continue to have childhoods like Petra’s. They face the violence of drug wars, poverty, and illiteracy, while gender and socioeconomic barriers continue to exclude them from many opportunities.

BL: Many of the most beloved children's classics relate tragic incidents and emotional experiences that impact the main characters as well as the readers. Why do you think it is important to write stories for children that can include heartbreak and emotional circumstances?

AD: Heartbreak is universal and transcends time. When children read stories like these, it helps them create an awareness for tragedies that have happened throughout history and continue to happen around the world. It reminds them of the things we take for granted and lets them realize it takes courage to protect what’s precious to us. Reading about others who have overcome adversity helps children develop resiliency because they know they’re not alone in facing adversities in their own lives. Stories like these also help create a sense of empathy for people who have experienced injustices in the past and now. Children have agency, and stories like Petra’s provide knowledge and confidence and gives them the power to make the world around them better.

BL: Petra and her family have a long and perilous journey that is balanced by her hopes and dreams for her and their future. As a writer, you are a product of your great-grandmother's dreams and experiences. What do you think she would say about her story being shared with the world a century later?

AD: Honestly, I think she’d give me a timid smile and wave at me, as if dismissing the fact that a season in her life inspired a whole book. She’d probably say, “Ay, n’ombre, ¡que va!”, pretty much meaning, “No way my small, little life could have inspired all that!” She was a very hard-working and determined woman, full of courage and resiliency, yet she was very humble and always maintained a high moral standard. I’m truly honored to be one of her descendants.

Find out more about the author at aldapdobbs.com.