Independent booksellers across the country have chosen Cloud Cuckoo Land by Anthony Doerr (Scribner) as their top pick for the October 2021 Indie Next List. 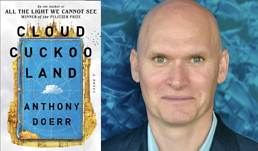 Spanning from 15th-century Constantinople, to present-day Idaho, to a not-so-distant future, Doerr’s latest follows children on the cusp of adulthood in worlds in peril, and their connection to a single book.

“I haven’t felt this hopeful after closing a book in a very long time,” said Julie Slavinsky of Warwick’s in La Jolla, California. “What does it mean to be alive? An ageless question, and yet throughout time the answer is always human connection and the stories we tell to live, thrive, survive.”

Here, Doerr discusses with Bookselling This Week how he tackled writing this novel.

Anthony Doerr: My books typically originate from a whole mess of ideas and influences that arrive over the course of years, so it’s hard to isolate just one, but I guess I could say that the very original idea — or maybe it’s more of an understanding? — came when I was a teenager in Ohio and my grandmother, who was suffering from Alzheimer’s disease, moved in with us. Over the course of the ensuing months, I watched dementia steal her sense of who she was, her ability to care for herself, everything. The disease devoured her entire self.

Perhaps because of that experience, for all of my adult life I’ve been preoccupied with the fragility of memory. In 2004, we spent a year at the American Academy in Rome, living beside a number of classical scholars, and when I began to understand that the texts that we still have from the ancient world are just a tiny fraction of all the works that were actually written down — that Sappho, for example, wrote around 10,000 lines of poetry, but only about 650 survive; or that Aeschylus wrote around 90 plays, but only seven have trickled down to the present day —that’s when I began to think that someday I’d like to write a novel that dramatized the miracle of a book — a human memory — surviving through the centuries.

BTW: The story hinges on a Greek comedy, The Birds. What’s your connection to this play? Why center the novel around it?

AD: The Birds is basically the original “buddy” comedy. Because they don’t like the current situation in Athens, two fellows decide to establish a new city in the sky, halfway between the realm of the humans on the ground and the gods in heaven. They call this place “Cloud Cuckoo Land.” But, of course, as in all utopian narratives, their paradise doesn’t quite turn out to be the paradise they’d hoped for.

During the months that I was searching for what sort of book to invent inside my novel — the text that would survive down until the present day — I was watching American culture feed my young sons dystopian narrative after dystopian narrative. Seemingly every time I went downstairs, another whole planet was exploding on the TV. So, I began to wonder what it would be like to explore utopian narratives in my novel. What does it mean to dream of a better place? What do utopias say about our current societies? These are the sorts of questions The Birds asks, and that I hope my novel asks too.

BTW: We follow five point-of-view characters in different parts of the world. How did you come up with the POV character for each section? Did a particular character come to fruition first for you?

AD: In my previous novel, All the Light We Cannot See, I entered the project by investigating how a new technology (radio) arrived and rapidly disrupted existing power structures. Then I invented characters, Marie-Laure and Werner, who were directly impacted by this burgeoning technology.

In Cloud Cuckoo Land, the process was identical. In 15th-century Europe, the printing press, compass, and gunpowder all showed up around roughly the same time, and long-standing power structures began to fall. In the case of Constantinople, gunpowder and mega-cannons meant that the city’s defensive walls — walls that had stood unbreached by foreign armies for 1,100 years — could be breached. So Anna, a girl inside those walls, and Omeir, a boy outside the walls, came first: two kids whose separate lives would eventually be intertwined by the upheaval caused by a new technology.

Because I wanted to show how the actions taken by Anna and Omeir reverberated through time, kind of like a ball bouncing down through the pegs of one of those Plinko boards on The Price Is Right, I looked for subsequent eras — like the one we’re living in now — where a confluence of new technologies led to rapid upheaval. And that’s where the other three protagonists, Zeno, Seymour, and Konstance, came in.

BTW: With such a large central cast, this book explores a range of experiences, such as mental and physical disability, racism, sexism, and homophobia. How did you approach writing these aspects of your cast?

AD: My writing is always a mix of library research, experience, and imagination, and this one was no different. I visited places; I read as widely as I could; I looked for diaries and chronicles and oral histories. And I peered inside myself, too — my anxiety issues are inside Zeno; my sensitivities are inside Seymour; my chafing against authority is inside Anna; my fascination for animals is inside Omeir; my love for story is inside all the characters, but particularly inside Konstance.

AD: Oh, they’ve introduced me to so many lifelong loves! I was first turned on to the work of W. S. Merwin by Sarah Hedrick at Iconoclast Books in Ketchum. Someone at Annie Bloom’s Books in Portland once sold me Daniyal Mueenuddin’s story collection In Other Rooms, Other Wonders, which became one of my favorite books of all time. I might never have found Marilynne Robinson’s Housekeeping if not for a bookseller at Powell’s in Portland.

But forget about my own life: When I think of everything Bruce and Laura Delaney do at Rediscovered Books here in Boise, from hosting programming to donating books to assisting book clubs to promoting local writers to building a new store in Caldwell, Idaho (and basically constructing an oasis of books in a book desert), I am dazzled. By strengthening our communities, indie shops like Rediscovered strengthen our national life in myriad and essential ways.