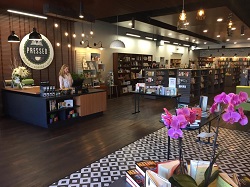 Pressed Bookstore has opened in Erie, Pennsylvania. Owner Tracey Bowes said about her new store, “I think Erie has a significant group of people who are really excited about this who are going to support it.”

Prairie Path Books in Wheaton, Illinois, will open an annex in September in downtown Wheaton. “Our first store is remaining open. We’re still strongly event-driven because we started that way, and we love gathering people together. It’s the most important thing we do, other than connecting people with great reads,” said Sandy Koropp, who owns the store with Jenny Riddle.

Downtown Book & Toy Too in Jefferson City, Missouri, has split into a separate bookstore, Downtown Books II, and toy store, which will be rebranded as Play 2 Learn.

The Washington Post highlighted a number of bookstores “by and for people of color” popping up in D.C., including MahoganyBooks, Duende District, and a Walls of Books franchise location. “We’re a town full of people of color, full of people from all over, and I think a lot about how we can best serve these communities,” said Duende District owner Angela Maria Spring. 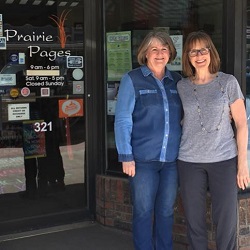 Prairie Pages Bookseller in Pierre, South Dakota, closed its doors on April 28 and will reopen in June under new ownership. “We’re very thrilled that Prairie Pages will continue and that Pierre will continue to have a bookstore,” said Peggy Stout, who opened the store with Kathy Villa in 2006.

DIESEL, A Bookstore in Larkspur, California, is up for sale. Alison Reid and John Evans, who started DIESEL in 1989, sold the store’s Oakland location to manager Brad Johnson last summer, and still own a store in Santa Monica. The couple is looking to sell the Larkspur store and reside in Southern California.

Ellen and Jonah Zimiles, owners of [words] Bookstore in Maplewood, New Jersey, will be honored by Celebrate the Children School, a non-profit organization dedicated to advancing the development of children and young adults with autism and special needs, for their passion, support, and dedication to the autism community.

Dana Brigham, co-owner and general manager of Brookline Booksmith, is retiring after nearly four decades at the helm. She will continue on at the store as a board member and senior adviser; longtime employees Lisa Gozashti and Peter Win will be the new co-owner and management team, and Tim Huggins, who founded Newtonville Books and joined Booksmith as controller in 2014, will be CFO. 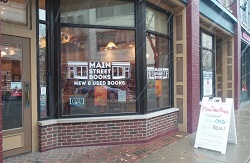 The Lafayette Leader profiled Main Street Books in Lafayette, Indiana, highlighting the bookstore for its eclectic inventory of new and used books, inviting and relaxing atmosphere, and calendar of events. “We are about encouraging people to read,” said owner Tamzin Malone. “We become better people, better citizens. Everyone benefits when you read.”

Lake Placid News talked to The Bookstore Plus owners Sarah and Marc Galvin, who own and operate the Main Street bookstore in Lake Placid, New York. The couple shared a behind-the-scenes look at what goes into owning a bookstore, from curating the selection to paying the bills.

The Stroud Courier featured downtown Stroudsburg, Pennsylvania’s Carroll and Carroll Booksellers, which was founded by George and Lisa Carroll more than 20 years ago.