Prologue Bookshop is tentatively scheduled to open this October in Columbus, Ohio.

Northshire Bookstore in Saratoga Springs, New York, will celebrate five years in business on August 5. Festivities will include a tote bag giveaway, a raffle, cake, and a champagne toast.

Mavis the Magical Bookmobile, a refurbished ambulance turned book cart, is up and running as part of BookBar’s initiative to increase literacy in Denver, Colorado.

Bookshop Santa Cruz launched AWE: The Alliance of Women Entrepreneurs, an organization that promotes and supports downtown businesses in Santa Cruz, California, that are owned or managed by women.

Emma Straub, owner of Books Are Magic in Brooklyn, New York, discussed the success of her business with TODAY. 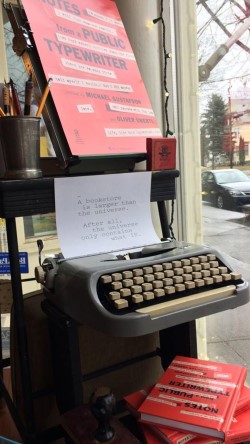 Bookie’s in Chicago has won Rare Bird Books and Book Passage’s “Through The Bookstore Window” display contest, in which stores were asked to create and send photos of displays featuring books about bookstores. Winners were announced on July 25. As part of its win, Bookie’s received a grand prize of $500.

Heather Boyne’s display at Battenkill Books in Cambridge, New York, was selected by Hachette Book Group for its Notes from a Public Typewriter window display contest.

Kelly Justice of Fountain Bookstore and David Shuman of Book People Richmond, both located in Richmond, Virginia, appeared on the podcast Full Disclosure in an episode called “B(u)y the Book.”