Ferguson Books in Grand Forks, North Dakota, will host the grand opening for its second location, in Bismarck, on Saturday, November 10. “We have had a wonderful response from both downtown leaders and book customers from the Bismarck/Mandan area and, quite frankly, have been asked to locate here for many years,” said co-owner Dane Ferguson in an announcement on Facebook.

Harvey’s Tales is now open in Geneva, Illinois. Its grand opening was held on October 13 and featured live music.

Turn the Page in Westfield, Indiana, is now open.

The Book Bungalow opened in St. George, Utah, on September 26; a grand opening celebration featuring a ribbon-cutting ceremony, ice cream, giveaways, and a puppet show will be held on October 19.

The Country Bookshop in Southern Pines, North Carolina, is marking 65 years in business this year.

Third Place Books in Seattle, Washington, will celebrate its 20th birthday the first weekend in November with comedian and writer Abbi Jacobson.

Lexi Beach of Astoria Bookshop in Queens, New York, penned a Twitter thread about supporting indie bookstores that was covered by Electric Lit. 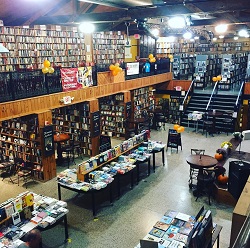 Susan Richmond of Inklings Bookshop in Yakima, Washington, talked with the Yakima Herald about what it’s like to run an indie bookstore.

Architectural Digest featured a list of “The Most Beautiful Independent Store in Every State in America,” which included Oxford Exchange in Tampa, Florida; The Last Bookstore in Los Angeles; Wild Rumpus in Minneapolis; Square Books in Oxford, Mississippi; and Fact & Fiction in Missoula, Montana.

Hoodline named The Tattered Cover, BookBar, and City Stacks Books and Coffee as top bookstores in Denver, Colorado, as well as Harvard Book Store, the MIT Press Bookstore, and Porter Square Books as the best bookstores in Cambridge, Massachusetts.