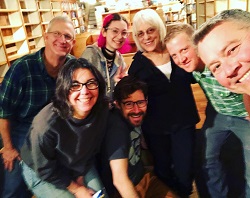 The Golden Notebook posted to Instagram: "This is what all the books out of the front of our store looks like! We are not closed! We are open thurs to mon back of store and new and improved March 1st! "

The Golden Notebook in Woodstock, New York, is renovating the store throughout the month of February.

WGRZ News reported that MahoganyBooks in Washington, D.C., “brings black literature to an African-American community with no bookstore.”

Malvern Books was featured in an article titled “A space for literature lovers finds its niche in the digital age.”

C-Span will feature Vroman’s Bookstore on Book TV. Vroman’s will also be converting a section of its store into a wine bar.

The Frederick News-Post reported that Curious Iguana in Silver Spring, Maryland, is setting readers up on blind dates with a book for Valentine’s Day.

WCVB reported on “the reinvention of independent bookstores” in the Boston area, including Trident Booksellers & Café, The Frugal Bookstore, and The Silver Unicorn.

A number of ABA member stores were featured on NYup.com’s guide to Buffalo bookstores.

The Tri-County Times reported that “Independent bookstores are ‘thriving.’”