Los Angeles to Welcome The Ripped Bodice in Spring 2016

Sisters Bea and Leah Koch are planning to open The Ripped Bodice, a brick-and-mortar bookstore dedicated to romance novels, in Los Angeles next spring.

“The Ripped Bodice is the store we’ve always wished existed,” said Leah Koch. “We want to create a safe and welcoming space for the community of intelligent and outspoken people who write, read, and love romance novels.”

The shop will be organized by sub-genre and will have a romance-of-the-month club, a full calendar of signings and lectures, and an online store and community. The owners are launching a Kickstarter campaign on October 20 to raise $90,000 to open the store, with rewards including Ripped Bodice hats, shirts, and totes, plus subscriptions to the Minerva Library, its romance-of-the-month club. The shop’s opening is scheduled for April 1, 2016, in Culver City.

“Romance is the best-selling genre in North America, with over $1 billion in annual revenue as recently as 2013, yet it doesn’t have a single dedicated brick-and-mortar bookstore,” said Bea Koch. “And yet comic books, science fiction, and mystery novels all have many dedicated stores. Romance novels are a major force in the world of publishing, will continue to be so in the years ahead, and it’s time the genre’s passionate fans have a bookstore they can call their own.”

Washington D.C.’s Upshur Street Books will mark its one-year anniversary on November 1, and the bookstore is thriving, reported the Washington Post.

“A bookstore, for me, is a place where there can be a cultural conversation,” said owner Paul Ruppert, an area businessman who opened the bookstore in the vicinity of his two other businesses, the bar Petworth Citizen and the restaurant Crane & Turtle. The bookstore is managed by former Politics & Prose employee Anna Thorn.

Upshur has put a focus on hosting creative and unexpected events, including cupcake tastings, documentary screenings, yoga classes, mixology lessons, and a Ulysses reading marathon, which was held in the larger space of Petworth Citizen. Children’s programming includes singalongs and Spanish-language craft workshops and story times.

Approaching the bookstore’s anniversary, Ruppert noted, “Anna and I and the rest of the crew feel like we’re finally getting our feet underneath us.”

On October 13, Oblong Books & Music in Millerton, New York, marked its 40th anniversary. The store was founded in 1975 by Dick Hermans and Holly Nelson.

The business, which now includes a location in Rhinebeck, is run today by Dick Hermans and his daughter, Suzanna Hermans. On Facebook, the Hermans expressed their thanks to customers for their many years of customer support. “Forty years and a second location later, we are stronger than ever. Thank you to our devoted customers and the over 150 booksellers who have worked for us over the years — we would not be here without all of you,” they wrote.

To keep the business fresh, both stores were renovated in recent years. In 2013, Dick Hermans oversaw a complete renovation of the Millerton store, and in 2011, under the direction of Suzanna Hermans, the Rhinebeck store was spruced up and 1,000 square feet was added. 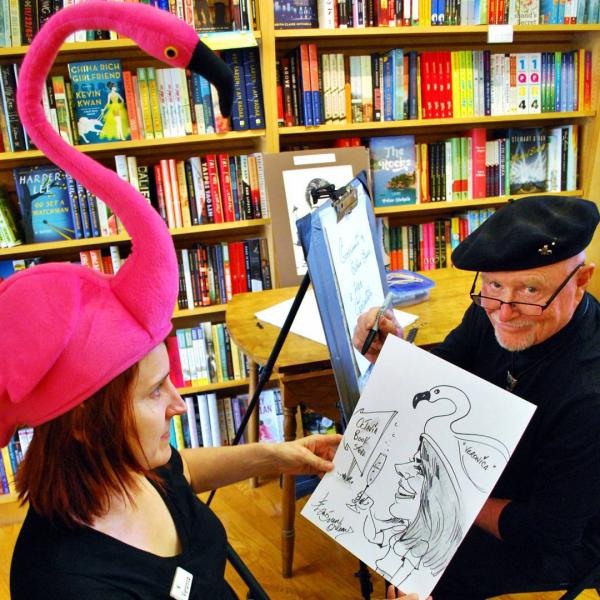 Customers arriving dressed as their favorite literary character were entered in a drawing for a prize. Music was provided by pianist and singer Phil Melancon, and artist Steve Lindsley drew caricatures of attendees.

The 50-year-old Maine Coast Book Shop, owned by Susan and Barnaby Porter, was named the New England Bookstore of the Year by the Book Publishers Representatives of New England and the New England Independent Booksellers Association in 2008; both bookstores have been named Best Bookstores in Maine by DownEast Magazine.

“I feel strongly that a bookstore is the soul of a vibrant downtown,” said Sherman’s owner Jeff Curtis. “We will do everything in our power to make sure The Maine Coast Book Shop remains the social and cultural center of Damariscotta. It is already a popular and successful business ... we do not intend to make any significant changes.” 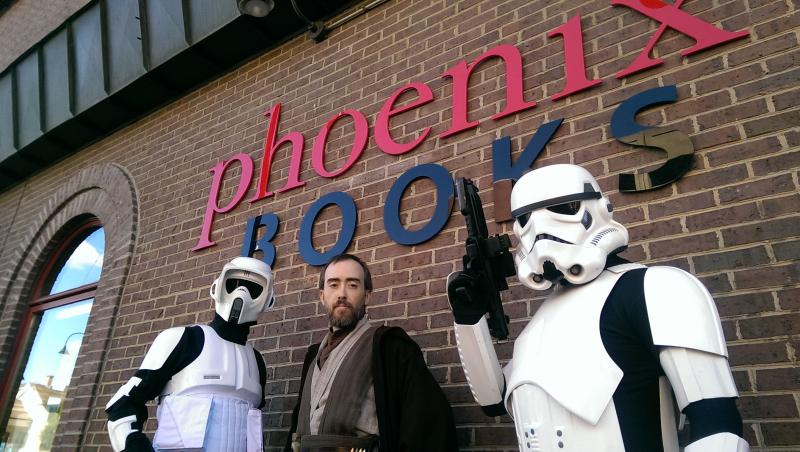 More than 200 Star Wars fans descended on Phoenix Books on October 10 to enjoy Star Wars activities and goodies and to snap photos of themselves with members of the 501st Legion, an international costuming organization, who were dressed as characters from the franchise.

Vroman’s Bookstore has announced the fall 2015 selection for the Young Readers League, which brings together school-age children in a community-wide reading program. Last year, more than 1,000 children in Pasadena participated in the program, which is sponsored this year by the Pasadena Public Library.

This fall, children all over the city will be reading Rump: The True Story of Rumpelstiltskin by Liesl Shurtliff (Yearling) and attending special activities and events to celebrate the book, including Rump-inspired crafts, a mother-daughter book club, a magic show, a treasure dig, a trivia night, and more.

The event series will be capped off with an appearance by Shurtliff, who will visit local schools, the Boys & Girls Club, and Pasadena Central Library on November 17.