Bradshaw, who was previously a senior advisor to former Florida Gov. Jeb Bush, told the Democrat she has been busy with renovations, as well as with visiting indie bookstores throughout the country to learn about the business. She also attended the Southern Independent Booksellers Alliance fall trade show in Savannah earlier this month.

Bradshaw purchased a building for the 1,500-square-foot bookstore, which will feature 10,000 books, including a children’s section and a special focus on books about Florida and books by Florida authors.

“I’ll be honest: I’ve been scared to death that 1,500 square feet would not be enough, but the other booksellers I have talked to think that it is perfect in that it allows you to learn your market, to make adjustments as you go along without overwhelming yourself,” Bradshaw told the Democrat.

The store will be managed by Jeff Hipsher, who recently graduated from Florida State University’s creative writing program and previously worked for Follett Publishing.

Owner Sarah McNally told West Village Patch that she’s also looking for a location for a second bookstore and café in Greenwich Village.

Kepler’s Books in Menlo Park, California, was featured in the fall issue of Stanford Social Innovation Review in an article that detailed the bookstore’s transition from a traditional bookstore to a hybrid model that incorporates both for-profit and nonprofit elements.

Praveen Madan, who led the project to transform Kepler’s, explained that in 2011, “Kepler’s was about to be shut down, unless there was a reimagining of its future and the role that it played in its community.” With the help of a dedicated transition team, the store settled its debts, installed a new board of directors, and shifted its assets and liabilities to a new entity; the result was consistent profits from 2012 forward.

Under the new structure, the bookstore continued as a for-profit business, but the store’s community events operation became a nonprofit called Peninsula Arts & Letters, which receives fiscal sponsorship and governance oversight by the Silicon Valley Community Foundation. “Now the community programming can flourish on its own, without being saddled with the question ‘Can we sell enough books to make this work?’” said Jean Forstner, manager of Peninsula Arts & Letters.

Madan is now looking to make Peninsula Arts & Letters an autonomous nonprofit, with its own governance and administration, as well as to make new changes to the bookstore. “The goal is to evolve Kepler’s away from its current model [and toward being] a social and cultural institution run entirely by the community, for the benefit of the community,” Madan said. 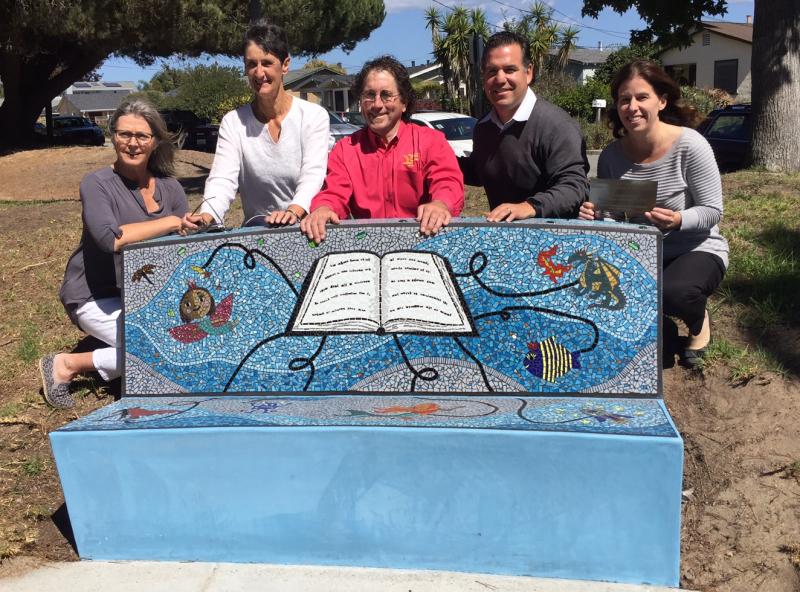 “After seeing the immediate positive response to our first artful reading bench, we are so excited to share this project with another Santa Cruz neighborhood. It is our hope that reading with families in our local playgrounds becomes the norm,” said Coonerty Protti.

Connecticut Magazine recently named R.J. Julia Booksellers in Madison, Connecticut, the best independent bookstore in the state, as voted by readers. The magazine said, “This shoreline institution is for book lovers, by book lovers. Its quaint, welcoming space is filled with a diverse inventory. The staff is dedicated to finding you the perfect read, and there’s a cute café to enjoy, plus more than 350 author events annually.”