Aaron’s Books in Lititz, Pennsylvania, has announced the opening of Of Dice & Pen, a game store located within the bookstore that focuses on modern tabletop games, role-playing games, graphic novels, and select single issue comics, as well as books and gifts from a variety of sci-fi, fantasy, anime, and other pop-culture fandoms. 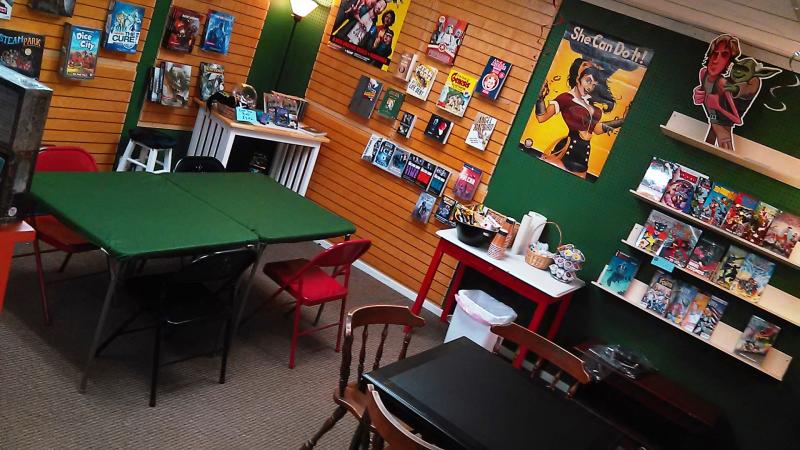 To celebrate its opening, Of Dice & Pen will offer special prizes and discounts for fans and gamers during the weekend of November 25–27. The new store will be managed by Aaron’s Books co-owner Sam Droke-Dickinson with help from her teenage son, Aaron, for whom the bookstore was named when it opened in 2005.

The press is co-founded by Kate Layte, the founder and owner of Papercuts J.P., and Katie Eelman, the bookstore’s media and events director. Layte will serve as publisher and Eelman as editor-in-chief.

“Publishing books has always been part of the plan for my entrepreneurial endeavors — as my background is in book publishing and I’m deeply inspired by the legendary bookstores that publish like City Lights and Shakespeare & Co.,” said Layte.

Eelman said, “After the runaway success of the first volume of The Papercuts Anthology, it became clear that we had a platform and an audience for excellent books that entertain, enlighten, and challenge readers. We aim to publish books for our community and beyond that do just that.”

Cutlass Press books to publish in 2017 include Ragged by Boston crime writer Christopher Irvin and The Papercuts Anthology, Volume 2, with contributions by Meredith Goldstein, Lauren Weedman, Jessica Valenti, Steve Almond, and others. Cutlass Press titles will be distributed by Ingram.

Washington, D.C.’s Kramerbooks & Afterwords Café is planning to expand into the space next door, reported Borderstan.

Formerly Willie T’s Lobster Shack, the space will be incorporated into the bookstore café and will open within a couple of weeks, revealed Kramerbooks COO Jamie Galler at a meeting last week of the Dupont Circle’s Advisory Neighborhood Commission.

The expansion aims to give more breathing room to the business, particularly the café arm, Galler said. It will also allow the shop to carry a greater variety of books.

The Lit. Bar to Pop Up at Bronx Museum Holiday Market

Noelle Santos, owner of The Lit. Bar, a bookstore/wine bar that will open in the South Bronx next year, will set up the store’s very first pop-up shop on December 10–11 at the Bronx Museum Holiday Market.

The Lit. Bar’s table will feature independent and mainstream titles and gifts, said Santos, including coloring books created and illustrated by Bronx native and custom cake designer Melody Velez; umbrellas in decorative cases that mimic wine bottles; and “Blind Date with a Book” selections — mystery titles gift-wrapped and tagged with clues so they can’t be judged by the cover.

Earlier this fall, Santos won second place in the New York 2016 StartUP! Business Plan Competition, earning $7,500 toward opening her bookstore. Learn more about her journey to open The Lit. Bar on her blog, 1stNoelle.com.

In honor of its fifth anniversary, Parnassus Books in Nashville, Tennessee, welcomed customers in for a two-part celebration.

On Saturday, November 12, customers enjoyed a visit from Doug the Pug as well as a special sale that awarded a free book to anyone purchasing five. On Wednesday, November 16, customers received 16 percent off all hardcover books all day and were treated to giveaways, prizes, snacks, champagne, and cake.

Novelist Ann Patchett and publishing veteran Karen Hayes opened Parnassus Books in November 2011 as a response to the dearth of bookstores in the area at the time. More than 3,000 people visited the bookstore on opening day, November 16, 2011.

Store staff have compiled a history of the store and a wealth of photos in a special post about the bookstore’s anniversary on Parnassus’ literary journal, Musings.

Chloe Eudaly, owner of Portland, Oregon’s Reading Frenzy bookstore, won her campaign for a seat on Portland’s city council, Oregon Public Broadcasting reported. Her focus as a city council member is protecting renters amidst a real estate market that is forcing people out. She plans to call for a rent freeze and an end to no-cause evictions.

Eudaly, who has owned Reading Frenzy for more than 20 years, raised $85,000 to campaign against incumbent city commissioner Steve Novick, who raised $422,000.

“I’m scrappy and resourceful. I come from a very grassroots do-it-yourself background, so we were able to make those dollars stretch farther than a candidate running a typical campaign,” Eudaly said. “We were out connecting with individuals, and not courting a relative few big money donors.”

Eudaly, the first challenger to win against an incumbent on Portland’s city council in more than 20 years, will be the eighth woman to serve on the council.

With the help of Dr. Seuss’ The Grinch, Phoenix Books, which has locations in Essex, Rutland, Burlington, and Chester, Vermont, will kick off its annual food drive in early December, inviting community members to “grow their hearts three sizes” by bringing a nonperishable donation for the local food shelf.

Phoenix Books launched its first food drive in 2014. Every year since, Phoenix Books owner Mike DeSanto has pledged to make a cash donation equal to the value of food donated.