Loyalty Bookstore in Washington, D.C., is holding a soft opening on Valentine’s Day and a grand opening on Saturday, February 16.

The Center for Fiction’s new, 18,000-square-foot facility in Fort Greene, Brooklyn, will include a new indie bookstore. 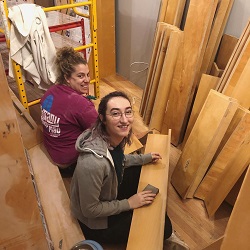 [words] Bookstore will open a second branch this April in Livingston, New Jersey, in a location that will be designed entirely for people with disabilities.

That Book Store in Wethersfield, Connecticut, was recently issued a tavern permit and will soon be serving beer, wine, and cider.

Book No Further in Roanoke, Virginia, is moving to a larger store in March. The new 1,200-square-foot location will enable the store to increase inventory, add book- and reading-related merchandise, and host author signings, writing classes, and book club meetings. An expanded children’s area will include space for reading and activities.

Sassafras on Sutton in Black Mountain, North Carolina, plans to reopen next month after being closed since December due to damage from a major snowstorm.

The Published Page Bookshop was featured in the first episode of a new online TV series, Downtown Heroes. The store will also make an appearance in the second episode.

The Andover Bookstore in Andover, Massachusetts, has claimed the title of the oldest independent bookstore in the country.

EyeSeeMe in St. Louis, Missouri, was featured in an article titled “They Wanted Their Kids to Read Black Authors. So They Opened a Bookstore.”

Print: A Bookstore was mentioned in the article “Neighborhood on the verge: Portland’s East End comes into its own.”

Green Apple Books co-owner Pete Mulvihill talked to the San Francisco Diaries podcast about how he came to be owner of the iconic San Francisco store.

WHYY reported that independent booksellers are “staging a comeback” in Philadelphia, Pennsylvania. The article named member stores A Novel Idea on Passyunk and Shakespeare & Co., among others.

The on-site printing press at Shakespeare & Co. was showcased by WestSideSpirit.com.