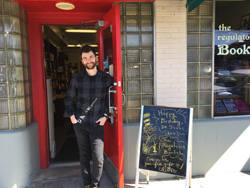 Kelley and Andy Carpiac will take over the San Marino Toy and Book Shoppe in San Marino, California, in April.

The Regulator Bookshop, in Durham, North Carolina, celebrated its first year under new ownership last weekend. “This first year has been amazing,” owner Elliot Berger reported in a press release. “It’s been whirlwind of changes and improvements and the Durham community has been great in coming out to show its support and love of The Regulator. The feedback has been overwhelmingly positive.”

Sassafras on Sutton in Black Mountain, North Carolina, reopened last weekend after closing in December due to damage from a major snowstorm.

New Dominion Bookshop in Charlottesville, Virginia, was featured in a spotlight on PBS, which explored the history of the nearly 100-year-old shop, offered interviews with indie bookstore lovers, and more.

"On the Come Up" video filmed at Bookmarks

Teenagers in Winston-Salem, North Carolina, filmed a video inspired by Angie Thomas’ On the Come Up inside Bookmarks.

Page and Palette in Fairhope, Alabama, was included in a New York Times article titled, “A Southern Town That’s Been Holding on to Its Charm for More than a Century.”

The Mitten Word Bookshop in Marshall, Michigan, was featured in the Ann Arbor Book Society’s March newsletter, as well as in an article posted to the Starr Commonwealth’s blog.

WLOS reported that Firestorm Books & Coffee, the Steady Collective, and the City of Asheville have reached an agreement following the city’s issuance of Notices of Violation regarding Firestorm and Steady Collective’s needle exchange program.

Hoodline reported on the “4 best bookstores in Los Angeles,” which included The Last Bookstore, Skylight Books, and Kinokuniya.