Dickens Children’s Books and Publishing Lab is set to open on Friday, March 15, in Vancouver, Washington. 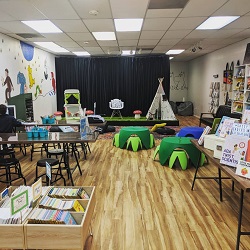 A look inside Dickens Children's Books and Publishing Lab.

The Lit. Bar in the Bronx offered a sneak peek of the soon-to-open store on Facebook. Forbes also featured owner Noëlle Santos in an article titled, “Great Idea But No Capital? How To Launch A Business Through Crowdfunding.”

Busboys and Poets will be opening a seventh location in the Anacostia neighborhood of Washington, D.C.

Blue Manatee, a children’s bookstore that announced plans to close in January, will reopen as the Blue Manatee Literacy Project, a nonprofit organization aimed at boosting children’s reading skills, on April 2 in Cincinnati, Ohio.

Bay Books in Coronado, California, announced plans to relocate to another building on Orange Avenue.

Women & Children First in Chicago, Illinois, will celebrate its 40th birthday on March 24.

Winston-Salem indie bookstore Bookmarks was chosen as the 2019 Community Partner by Winston Under 40, the young professionals initiative of the Winston-Salem Chamber of Commerce.

The Baltimore Sun featured Books With a Past in Glenwood, Maryland.

Clancey D’Isa has been promoted to manager of 57th Street Books in Chicago, Illinois.

Among other stores, Carmichael’s Bookstore received numerous orders for books from Larkspur Press after CBS News ran a piece on craftsman Gray Zeitz.

Appletree Books, Loganberry Books, The Learned Owl Book Shop, and other Ohio bookstores were mentioned in an article titled, “Independent bookstores turn the page, thrive as places to unplug.”

Hicklebee’s was named by Hoodline among the best bookstores in San Jose, California.

The Boston Globe published a piece titled, “Why independent bookstores are thriving in spite of Amazon.”