Lark and Owl Booksellers in Georgetown, Texas, is now open.

Orca Books in Olympia, Washington, announced in a press release that it will be shifting to a cooperative business model.

Writer’s Block Bookstore in Winter Park, Florida, will be moving to a new location this fall.

Charis Books in Decatur, Georgia, has moved to a new location at Agnes Scott College.

Raven Book Store in Lawrence, Kansas, made headlines last week with a tweet about what it means to buy books at indie stores versus online. 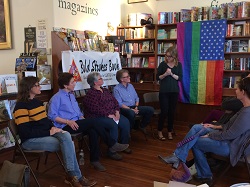 Battenkill Books in Cambridge, New York, hosted an author panel from Bold Strokes Books, which is one of the largest publishers of LGBTQ fiction in the world, publishing around 120 frontlist titles annually. The event was standing room only.

New Dominion Bookshop in Charlottesville, Virginia, was featured in UVA Today for its upcoming partnership with Shakespeare on the Lawn, a student-run theater troupe.

In Maine, hello hello books “offers [a] unique Rockland experience,” according to VillageSoup.com.

ABA member stores Café Con Libros, Mil Mundos, The Lit. Bar, and Word Up were included on this list of Latino-run bookstores in New York.

The Last Bookstore was included on Gildshire.com’s list of the coolest bookstores around the world.

Many ABA member stores were included on the Pasadena Star-News’ list of 22 bookstores to visit on Independent Bookstore Day.

Among the best bookstores in Pittsburgh, Hoodline highlighted White Whale Bookstore and Journeys of Life, and in Memphis, Novel. and Burke’s Books.