High Five Books is opening this fall in Florence, Massachusetts.

Commonplace Reader in Yardley, Pennsylvania, will open on August 10.

Women & Children First in Chicago will celebrate its 40th anniversary on August 24 with a neighborhood block party.

Norwich Bookstore in Norwich, Vermont, is celebrating 25 years in business.

Michelle Haring of Cupboard Maker Books in Enola, Pennsylvania, won the 2019 Steffie Walker Bookseller of the Year Award from the Romance Writers of America. 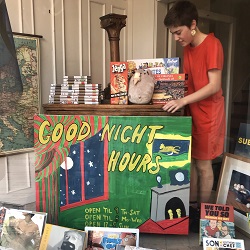 Half Price Books in San Antonio, Texas, was named best bookstore by the San Antonio Current.

Bookshop Santa Cruz in Santa Cruz, California, has launched a Bookshop Caucus, which will highlight books written by this election’s presidential candidates. This program is one part of the store’s year-long programming effort 2020 Vision, which uses reading recommendations, author events, and community partnerships to look back on where we have been as a country, shine a light on our current affairs, and look ahead to 2020 and beyond.

Birchbark Books & Native Arts in Minneapolis, Minnesota, was featured in an article called “Where to Find Native American Culture and a Good Read.”

Book Riot published virtual tours of Second Star to the Right in Denver, Colorado, and The Last Bookstore in Los Angeles, California.

Binnacle Books in Beacon, New York, was featured in an article titled “Binnacle Books: The Near-Sacred Experience of the Independent Bookstore.”

Hennessey & Ingalls in Los Angeles, California, was featured in an article on “What’s selling at California’s biggest design bookstore?”

Changing Hands, with locations in Phoenix and Tempe, Arizona, was featured in a piece on how indie bookstores are faring in the era of e-commerce.

Bookmarks in Winston-Salem, North Carolina, will present its 15th annual Festival of Books & Authors on September 5–8.