DIESEL, A Bookstore will open a new location in San Diego, California, this fall. 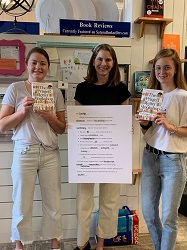 Katherine Reay posing with the Mad Libs will given to her by Saturn Booksellers.

Greedy Reads in Baltimore, Maryland, will open a second location in the Remington area later this year.

Tattered Cover in Denver, Colorado, will open a new location in Westminster next year.

Gottwals Books will be moving its Warner Robins, Georgia, flagship store to a larger location.

Penn Book Center in Philadelphia, Pennsylvania, is now under the ownership of Matthew Duques and Diana Bellonby.

The Book Worm in Powder Springs, Georgia, has officially begun its transition to a co-op model.

Vroman’s Bookstore in Pasadena, California, is celebrating its 125th anniversary this November.

Square Books in Oxford, Mississippi, is celebrating 40 years this September.

The Ivy Bookshop in Baltimore, Maryland, which will move to a new location next spring, has announced plans to fully renovate its new space.

M. Judson Booksellers & Storytellers in Greenville, South Carolina, was featured in an article about the store’s namesake, Mary Camilla Judson.

Wild Geese Books in Franklin, Indiana, was mentioned in an article called “A story of community: How one woman’s dream transformed into Franklin’s favorite bookshop.”

Saturn Booksellers in Gaylord, Michigan, hosted author Katherine Reay on Saturday, August 3. During the event, attendees offered words to use as part of a Mad Libs will that the store created for her to mimic the will in her book.

Greenlight Bookstore, Unabridged Bookstore, Left Bank Books, The Last Bookstore, and Montague Bookmill were named some of the eight coolest bookstores in the United States.

Sun Rose Words and Music, Words! Bookstore, The BookTowne Bookstore, and River Road Books were featured on a list of 16 bookstores on the Jersey Shore.

BookBar in Denver, Colorado, was featured among the city’s “hidden gem bookstores.”

Literati and Nicola’s Books were highlighted on a list of things to do in Ann Arbor, Michigan, before the school year starts.