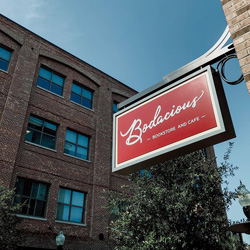 Bodacious Bookstore and Cafe will be hosting its grand opening in Pensacola, Florida, later this month.

The former Phoenix Books Misty Valley in Chester, Vermont, has reopened as Blair Books & More under the ownership of Vicki Thornton.

In addition to celebrating its 125th anniversary in November, Vroman’s Bookstore in Pasadena, California, is rebranding, opening a new wine bar, and implementing a store membership program.

Small World Books in Venice, California, is celebrating its 50th anniversary on September 12.

Wellesley Books in Wellesley, Massachusetts, has won the 2019 Independent Spirit Award, which is sponsored by the Book Publishers Representatives of New England.

New Dominion Bookshop in Charlottesville, Virginia, was named Charlottesville’s Best Independent Bookstore for the sixth year in a row by C-VILLE Weekly.

Rediscovered Books in Boise, Idaho, was profiled in the local news.

Penn Book Center in Philadelphia, Pennsylvania, and its new owners were profiled by Philly Mag.

Bluestocking Books, Mysterious Galaxy Bookstore, and Warwick’s were featured on a list of the coolest indies in San Diego.

Longfellow Books and Sherman’s Books and Stationary were featured on a list of the best bookstores in Portland, Maine.