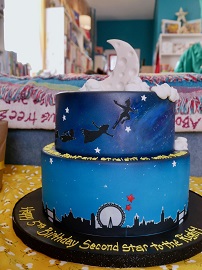 A photo from Second Star to the Right's Anniversary Celebration

Cupboard Maker Books in Enola, Pennsylvania, will open a pop-up location in Lower Paxton Township for the holiday season.

Interabang Books in Dallas, Texas, will reopen in mid-November in a new location after being closed due to storm damage.

Neal Coonerty, the former owner of Bookshop Santa Cruz and former president of the American Booksellers Association, has retired.

Second Star to the Right in Denver, Colorado, celebrated its fifth birthday over the weekend with book giveaways, a sale, crafts, and cake.

From My Shelf Books & Gifts in Wellsboro, Pennsylvania, has advanced to the second round of the Independent Small Business of the Year Award, sponsored by Independent We Stand.

Half Price Books in Dallas, Texas, donated more than 2.500 to students at schools in the city that are closed indefinitely due to the tornado that happened two weeks ago.

The Los Angeles Times spoke with Ann Patchett, owner of Parnassus Books in Nashville, Tennessee, about how indie bookstores are taking on Amazon.

Whistlestop Bookshop in Carlisle, Pennsylvania, was featured in an article called “A leaking roof and ruined books led to a flood of orders and tidal wave of customers for this bookstore.”