Read Books is scheduled to open in Virginia Beach, Virginia. 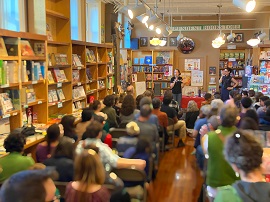 Author Tiffany Jewell at her standing room-only launch for This Book is Anti-Racist at Booklink Booksellers in Northampton, Massachusetts.

DIESEL, A Bookstore will open a new location in San Diego, California.

Book Shop of Beverly Farms in Beverly, Massachusetts, has been purchased by Hannah Harlow, executive director of marketing for general interest books at Houghton Mifflin Harcourt.

Excelsior Bay Books in Excelsior, Minnesota, is under new ownership.

The Bookloft in Great Barrington, Massachusetts, is moving to a new location.

Bookish: An Indie Shop for Folks Who Read in Fort Smith, Arkansas, has partnered with its regional council for a book drive.

One More Page in Arlington, Virginia, is celebrating nine years in business this month.

For Keeps Books in Atlanta, Georgia, was featured in the article “Atlanta bookstore, For Keeps, offers classic and rare black author titles.”

Covered Treasures in Monument, Colorado, was highlighted in the article “Independent bookstores adapt, survive the e-reader.”

Centuries and Sleuths Bookstore in Forest Park, Illinois, was featured in an article called “A vocation, not just a job.”

Tombolo Books in St. Petersburg, Florida, was highlighted for “bringing back the nostalgia of buying a new book.”

Off the Beaten Path in Lakewood, New York, was featured in an article called “Bookstore Owner Sets Goals for 2020.”

Sean Doolittle of the Washington Nationals, who has been a vocal fan of indie bookstores, was spotted at Capitol Hill Books in Washington, D.C., last Saturday, where he was mistaken for a staff member.