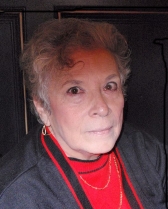 Audrey Eisman, the former coordinator of the American Booksellers Foundation for Free Expression (ABFFE), died on Sunday, April 23, following a long illness. She was 79.

Eisman joined the American Booksellers Association in 1992. A graduate of Hunter College where she was a theater major, Eisman was a researcher for The David Frost Show and produced several talk shows on TV stations in Detroit, Pittsburgh, and New York. She was the publicity director of Stein and Day Publishers from 1983 to 1991.

ABA CEO Oren Teicher hired Eisman soon after he became president of ABFFE. The organization was founded by ABA in 1990 to help booksellers respond to intense pressure for censorship generated by a pornography commission appointed by Attorney General Edwin Meese in 1985 and following the publication of Salman Rushdie’s Satanic Verses in 1988.

As coordinator, Eisman was responsible for managing ABFFE’s education program and fundraising activities. She handled inquiries from booksellers, publishers, and members of the press and organized panels and other events at the ABA convention, which later became BookExpo. She also ran the very successful ABFFE Silent Auction, which was held at the trade show for several years, and coordinated bookseller participation in Banned Books Week.

Eisman left ABA in 1998, when Chris Finan succeeded Teicher as ABFFE president and moved the ABFFE office to Manhattan. She became a fundraiser for the John O’Donnell Company, where her clients included the Jewish Child Care Association, the Harlem Boys Choir, KidsPeace, and the Empire State Pride Association.

Following her retirement, Eisman continued to work for ABFFE as its book editor, reviewing new books about free speech and editing the book page of the ABFFE website. She remained the book editor after ABFFE became American Booksellers for Free Expression (ABFE) as part of ABA, in 2015.

“Audrey Eisman played an important role in helping us launch ABFFE,” said ABA’s Teicher. “She was a fierce First Amendment advocate and a voracious reader. She was also a very hard worker and an incredibly loyal employee. ABA was fortunate to have her in our employ for a long time. In her later years, Chris Finan, ABFE’s current director, was instrumental in ensuring Audrey received the care and help that she needed, and all of us who knew and worked with Audrey are most grateful for all Chris did on her behalf.”