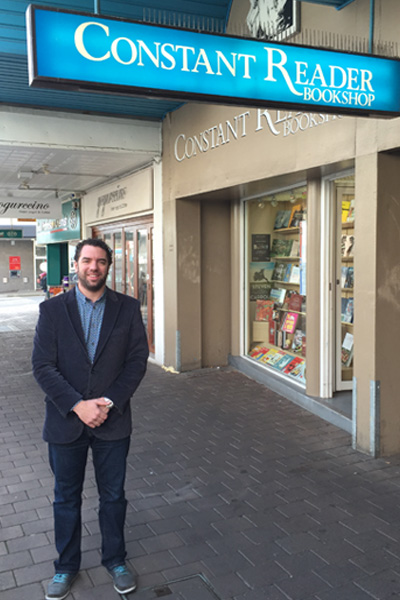 Lansdown, who owns Constant Reader Bookshop, one of the oldest independent bookstores in Sydney, said he invested in making the long trip to New York City after speaking to colleagues who had previously attended the conference.

Once he got to the trade show, Lansdown was delighted to meet authors whom he had long admired, including Neil Stephenson and Alice Hoffman, to gather up “many kilos of proofs” (or, in American parlance, many pounds of galleys), and to attend BEA’s Bloggers Conference, which he deemed an “invaluable learning experience.”

Overall, the three-day event at the Javits Convention Center this May was overwhelming in its sheer size and scope, Lansdown said, especially for an enthusiastic booklover like himself.

“My favorite thing about the work I do is being surrounded by books and the pure escapism they provide,” said Lansdown, who bought Constant Reader from its original owner in 2012 after serving as the store’s manager for four years. “I think the purest love for what I do is just to be surrounded by the physical objects themselves.”

At the show, Lansdown, whose background is in sales and business development in the traveling and tourism fields, said he was pleased to meet with the international sales representatives of a number of publishers.

Listening to other booksellers and authors speak at BEA, Lansdown said he came to the conclusion that there is very little difference between the cultures of American and Australian independent booksellers.

“The independents in both Australia and America are focused not only on their businesses, but how their businesses interact within their local community,” Lansdown said. “That can express itself through the events that we do both within our stores and outside of them — at schools, libraries, and community centers; how we donate to local causes and charities, and, hopefully, how we become a focal point on the ‘Main Street.’”

The two countries also face similar industry challenges, including an unfair tax advantage that benefits online retailers. Lansdown said that, while there is not as much of an Amazon monopoly on bookselling in Australia as there is in the United States, the Amazon subsidiary Book Depository is a significant force in the Australian market.

These online retailers have been effectively advantaged by the Australian government’s regulations on sales tax, Lansdown said. “The government [in Australia] does not charge GST (General Sales Tax) on overseas online purchases under $1,000. This means that international retailers have a 10 percent head start on pricing without even trying.”

Though online competitors like Book Depository and Amazon present challenges, they also present opportunities for booksellers to refocus on what traditional independent bookstores do well — serving their local community, he added. “This is something that online businesses in almost all industries can’t do; they can’t be all things to all men.”

When it comes to improving the international bookselling industry’s future prospects, Lansdown said booksellers need to take the lead in reframing the book as an object of value.

“A question that really rung home at the Australian Booksellers Association conference in May was, Do we really see books in the same genre as a cup of coffee? To be priced at less than $3?” he said. “If a movie (in Australia) can be priced at $20 for two hours of entertainment, should a book really be valued at less?”

Looking ahead to next year, Lansdown said if he decides to attend BEA 2016, he will arrange his time so that he can engage with some of the smaller American publishers he met at this year’s conference.

“Coming from Australia, there were so many small U.S.-based publishers that I had not heard of before,” Lansdown said. “The difficulty was staying focused on these publishers rather than getting distracted by the big internationals and their big-name authors.”

Either way, Lansdown said, he is definitely committed to coming to BEA in 2017.