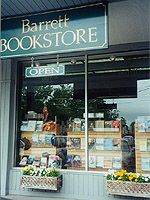 Barrett Bookstore, a presence in the Stamford, Connecticut, area since 1939, has been owned by Sheila and Tom Daley for the past 10 years. To celebrate their decade of ownership, on September 22, the Daleys served refreshments and offered a 20 percent discount on all books.

The store, now located in the Noroton Heights Shopping Center, is in the town of Darien, a 10-minute drive from its original location in downtown Stamford. Barrett Bookstore's history is a complicated one, according to Sheila Daley. Its evolution is chronicled in a recent Darien Times' article, written by columnist and bookstore employee Maggie McIntire.

In the 1970s, as the retail landscape in Stamford moved away from a busy downtown shopping district to become centered at a large mall anchored by upscale chain stores, then owner David Rose moved the bookstore to a more accessible location in Stamford, away from the mall. But more changes were afoot.

Barrett's thrived in its new location, and in the 1980s Rose, who had owned the bookstore for more than 30 years, opened a second store in central Darien, an affluent area. By 1989, Rose, and his wife, Carol, were priced out of the Darien shopping center, however, and they relocated to the store's current location in Noroton Heights, across from the commuter train station. Meanwhile, in 1992, Waldenbooks opened a superstore -- Bassett Book Shop -- next door to Barrett's Stamford spot. This incursion was critical to the Rose's Stamford store. They wound up closing it and retired a few years later.

The sale of the remaining store in the mid-1990s to a Texas couple proved disastrous to the Roses and the business. After the sale, bills went unpaid, stock was depleted, the physical space deteriorated, and the new owners abandoned the store after two years. The Roses attempted to restore the store and its reputation, and then sell it, but no one was interested. In 1997, the Roses were about to close the businesses permanently. "Just at the 11th hour," Daley told BTW, "we saw an advertisement for the bookstore and decided to take the plunge."

Tom Daley, who had retired from Wall Street a year earlier, was interested in starting a business with Sheila. The two had no retail experience but the Roses, gratified that the bookstore would continue, helped the Daleys get started for a few months. "They broke us in," said Sheila.

Starting with a small inventory, the Daleys soon doubled it. They have enlarged the space twice, to its current 2,800 square feet. "Our biggest problem [at the beginning] was our lack of a computer set up," Sheila Daley said. "We had to write by hand every book we sold and every order." No one was happier than Ingram and Baker & Taylor when they computerized, she explained with a laugh.

For the Daleys, the next technical advance may be in cyberspace. Sheila Daley said, "We know that we have to have a website, and eventually we will do it. [We've seen] that Book Sense.com offers great service and is nicely organized." Currently, the store's Book Sense Picks display draws interest at the entrance.

Barrett's is adapting to a changing demographic as well. Daley noted that the area's older clientele is retiring and moving away. "We now have lots of young families with children," she said, adding that the children's section keeps growing in popularity. People in their 40s and 50s also constitute a major part of the store's business, leading to a strong interest in book clubs.

Store events are often done in partnership with the Darien Public Library and the Darien Community Association -- both highly regarded and active organizations. "[They] provide great venues for events and they have extensive publicity networks," Daley told BTW. "We have someone on staff now who is going to work more on publicity and events -- we want to do more of that." --Nomi Schwartz