The sixth year will be the biggest year ever for YALLFest, the Young Adult book festival hosted by Blue Bicycle Books in Charleston, South Carolina, with 79 authors expected to appear.

The 2016 nonprofit YA festival will take place on Friday, November 11, and Saturday, November 12, at Blue Bicycle Books and at other venues along Downtown Charleston’s Upper King Street. Guests will get the chance to attend 22 panel discussions and keynote talks as well as author signings and other literary events. 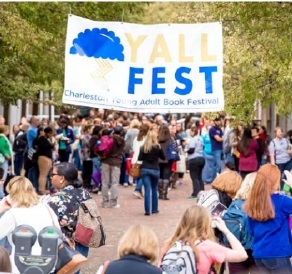 Blue Bicycle Books owner Jonathan Sanchez serves as executive director of the festival, which was founded in 2011 by Charleston-based writers Kami Garcia and Margaret Stohl, authors of the Caster Chronicles series (Little, Brown Books for Young Readers), as a way to bring authors from the YA community together in one place. However, Sanchez believes a key to the success of the festival, which drew 1,200 people last year, is the special connection that YA authors have with their readers.

“The whole online world of YA is really mobilized and engaged,” he said. “I think one year we had more than 200 YA bloggers at the festival. YA fans who come to YALLFest might be magazine writers, they might be teachers, they might be people who are writing fan fiction. There is a certain closeness between YA fans and YA writers because fans are reading a lot, and a lot of the time they are writing their own fiction.” It’s a different relationship compared to that of an author who lectures at people from a pedestal, Sanchez added, and that is reflected in the festival’s programming. “There are a number of panels and talks, and that sounds staid,” he said. “But these panels are very loose — everyone has a microphone and there’s a lot of back and forth. That idea of back-and-forth is a really important part of the festival.”

Each year, Sanchez works with festival producer Stephanie Barna, the rest of the festival’s board of directors, store staff, community partners, and an advisory board consisting of authors, publishers, and creative professionals to stage the festival. This year’s event is co-chaired by Veronica Roth, author of the blockbuster Divergent series, and Brendan Reichs, author, with Kathy Reichs, of the Virals series and the upcoming Nemesis (G.P. Putnam’s Sons Books for Young Readers). Victoria Aveyard, author of the Red Queen series (HarperTeen), will open the festival with Sabaa Tahir, author of An Ember in the Ashes and A Torch Against the Night (Razorbill). 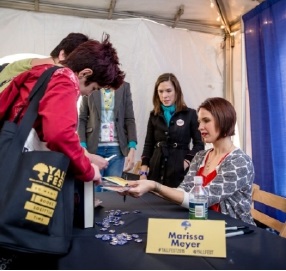 Marissa Meyer, author of Cinder, signing books at a past YALLFest.

This year’s main publisher sponsor is EpicReads, HarperTeen’s digital community for readers of YA. Sanchez said funding from sponsors mostly goes toward renting the venues, in addition to travel expenses for some of the visiting authors.

“Funding for the festival comes in through publisher sponsors,” said Sanchez, adding that it would also be great to see more sponsorship support from local businesses.

All four staff members at the 2,000-square-foot Blue Bicycle Books work overtime to put on the festival each year, and Sanchez said he personally works around 20 to 30 additional hours each week as the festival gets closer. The official festival office is inside the store, and a large tent in the store parking lot is where attendees can pick up signed books by participating authors. This year, Blue Bicycle has ordered 6,000 books and is taking pre-orders for signed copies prior to the festival.

This year’s festival panels explore a range of topics, including Sci Fi vs. Fantasy Throwdown; Love and Hate; Books That Wrote You; Heroes, Super and Otherwise; YA Meets Hollywood; Violence as Genre; and Family Drama. During YALLFest, 15 middle-grade authors will also make visits to area schools.

“What I like about YALLFest and what I think is really fun is, it really takes place in a downtown area instead of just being in a big convention center,” said Sanchez. “We have three or four theaters right by the bookstore with a couple of parking lots that are available, so we can make the festival happen right here in the city. This also brings more business to the area, which is a tourist-driven economy to begin with.”

YALLFest offers a variety of events for YA fans of all ages.

On average, 70 percent of attendees visiting the festival every year are from out of town, he added, so the area’s hotels are always booked solid for the weekend. The festival also works with the city’s Convention and Visitors Bureau on some of the event’s logistics. Sanchez noted that this year, a greater number of publishers are sending representatives to Charleston, proof, he thinks, that YALLFest is making its mark on the publishing community.

Visit the event website to learn more about the festival.