B&N’s Len Riggio at BookExpo: The More Bookstores the Better

On Wednesday, May 30, BookExpo kicked off its 2018 show with a grand opening keynote featuring Len Riggio, executive chairman of Barnes & Noble. In his talk, Riggio discussed his entry into bookselling and the growth of Barnes & Noble, and he provided attendees with his take on the current state of the bookselling industry. 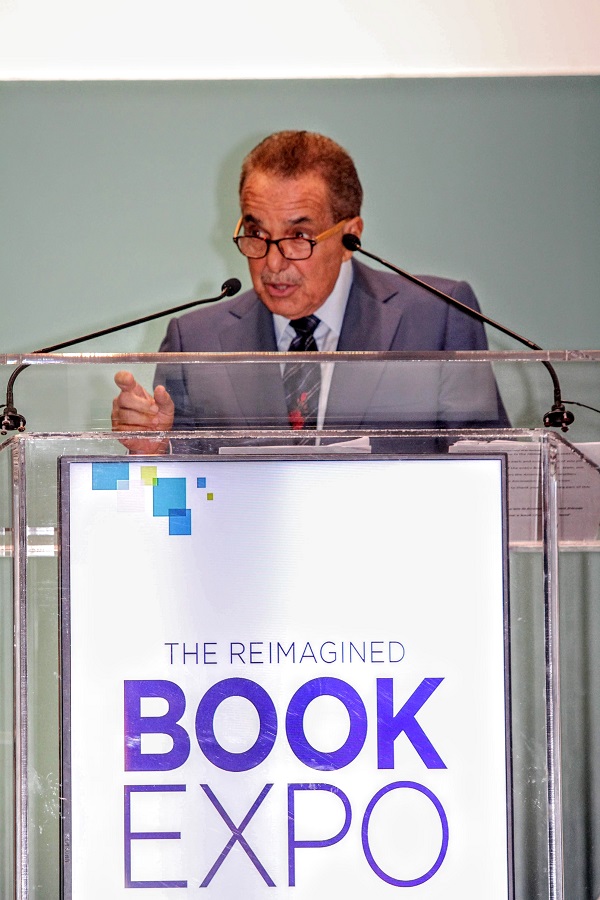 In opening remarks before introducing Riggio, American Booksellers Association CEO Oren Teicher thanked the “hardworking BookExpo team” for the “reimagined” BookExpo. “They really have worked hard to deliver a far more focused show — one that I am confident is going to benefit us all.” He stressed that ABA continues to believe that an industry-wide convention like BookExpo is critically important.

Turning to introduce the Barnes & Noble chairman, Teicher noted that “doing what I am about to do would have been impossible to imagine not so long ago.” Noting the importance of recognizing the changing nature of the book business, he said, “I’d suggest that a willingness to change and to adapt is healthy and appropriate. The simple fact is that our business is stronger and American readers benefit when there is a vibrant and healthy network of bricks-and-mortar bookshops all across the country.”

In opening his address, Riggio stressed that there could never be enough bookstores in the U.S. “We need to open more bookstores than we close, and Barnes & Noble intends to do its part...We are the showrooms for the publishing industry and for the great writers whose books we sell. More bookstores lead to greater demand,” he said, also noting that people who work or own bookstores are privileged to be in the profession. “The more bookstores, the better.”

Riggio said “no one was more pleased” that independent bookstores “are opening their doors again.” He stressed that he does not believe that B&N is in mortal competition with indies.

“In 1958, my life changed for the better and for the good when I walked through the doors of the NYU bookstore,” Riggio said. He fell in love with selling books because “I loved serving people … and I loved the action and the sheer business of the task.” Eventually, this led him to open his own bookstore.

In the 1960s, he opened his second store and “by the early ’60s, the book industry — perhaps mirroring the radical movement of the times — was in the throes of the mass-market and paperback revolution,” he said. “It was this phenomenon that piqued my interest” and ultimately opened his eyes to the joys of reading.

“From then on, all I wanted to do was sell books because just being in a bookstore made me happy,” he said.

Paperback books changed the market because working class people could now afford to buy books, Riggo noted. “They were my bridge to the future,” he said, and featuring them in his store became Riggio’s obsession. “Years later, I was accused of being a mass marketer … some said we homogenized bookselling and thereby limited choices. I never understood that logic. Huge title selections are who we are.” He added that for B&N to be successful, all they needed to do was to give the consumer what they asked for, and for B&N that was paperback books. And, Riggio argued, consumers are still asking for paperback books to this day.

However, Riggio said, the customers for today’s paperbacks face a different market. He noted that paperback books cost on average two-and-a-half times the minimum wage, as compared to one-half when he began his career. “How sustainable can this be, when Google promises all the world’s information for free? Can we afford to go back to a time and place when physical books could only be afforded by the carriage trade?” he asked.

Riggio stressed to publishers that serving the mass market is critically important to the future of the bookselling industry “because we need to attract more citizens, especially young people, to the joys of reading books,” he said.

The more that prices go up, Riggio said, the fewer books that are sold. And more of those books will be sold online. “Book prices are not inelastic. The law of supply and demand will always hold.”

Riggio continued, “And by the way, as Oren referred to, the best search engine in the world cannot compare to the aisles of the nation’s bookstores in terms of stimulating demand.”

Bookselling is not a zero-sum game, Riggio noted. When Borders shut its doors, B&N did experience increased sales “especially when we were across the street from them — but not to the extent of Borders’ [total] loss of sales,” he reported. And in the “hundreds” of stores where B&N shared proximity to Borders, “we hardly picked up 30 to 40 percent of their business. So, 60 to 70 percent of their business went ‘poof.’” Borders’ closure, overall, was a net loss to the bookselling industry, and not a cause for celebration.

During the course of his career, there were many times when books were considered endangered, Riggio said, whether it was due to movies, television, cable, the Internet, or digital books. “And then it happened, magically: readers began to yearn for the joys of reading physical books and, perhaps more importantly, the ownership of a real library… Little by little, books are making a comeback and the market is showing positive signs of growth,” he said.

Riggio then warned that, nevertheless, the industry should keep “the cork in the bottle” of champagne for now because “technology remains perpetually at its infancy,” and a new technology’s percentage growth (e.g., audiobook sales growing 29 percent last year) will tend to outpace the comparatively small percentage growth in the sales of physical books. “So as soon as we think things have gotten simpler, they become complicated again,” Riggio noted.

Looking ahead, Riggio said, “I believe we can say with certainty that the bookselling industry is not going away any more than reading books will be a thing of the past. On the other hand, no one can predict how big the industry will be, for whom and in what form. But the degree to which we grow and prosper will depend on how nimble we are and the degree to which we can create change.”

The size, shape, and location of tomorrow’s bookstores, Riggio noted, has yet to be determined.