Boogie Down Books Brings Borderless Bookselling Brand to the Bronx

Boogie Down Books, the “bookstore without walls” owned by Rebekah Shoaf, stages pop-up events at schools, businesses, and organizations around the Bronx featuring books on sale for children and teens, bimonthly story times, and events for caretakers and educators.

According to Shoaf, a former high school English teacher and coach for New York City teachers, “The Boogie Down Bronx” is a long-lived moniker for the borough referencing the influential role the Bronx had on hip hop. But despite the borough’s 1.4 million residents, which includes 600,000 kids under the age of 18, the Bronx offers no specialty bookstores for children and teens, said Shoaf.

“I’ve had a longtime dream of opening a children’s bookstore in the Bronx, which is where I live, and I had actually written a business plan, but I could not find a way to make the numbers work because of the real estate costs,” she told Bookselling This Week. “I thought someday in the future I’d find a way to make this work, but then I heard about this neighborhood micro-grant program, and since it was for only $3,000 I decided to do a pop-up.”

In October, Boogie Down Books held its first event, “Fall Into Reading,” a literary celebration for the community funded by the Citizens Committee for New York City’s Neighborhood Grant program, which offers micro-loans of up to $3,000 for resident-led community projects. The event, held at local school P.S./I.S. 224, was staffed by more than 30 volunteers and featured 200 free copies of six middle-grade and YA titles for young people ages 11–18 to take home. While this was going on, local not-for-profit arts organization House of SpeakEasy provided a book truck with picture books and adult titles on sale. 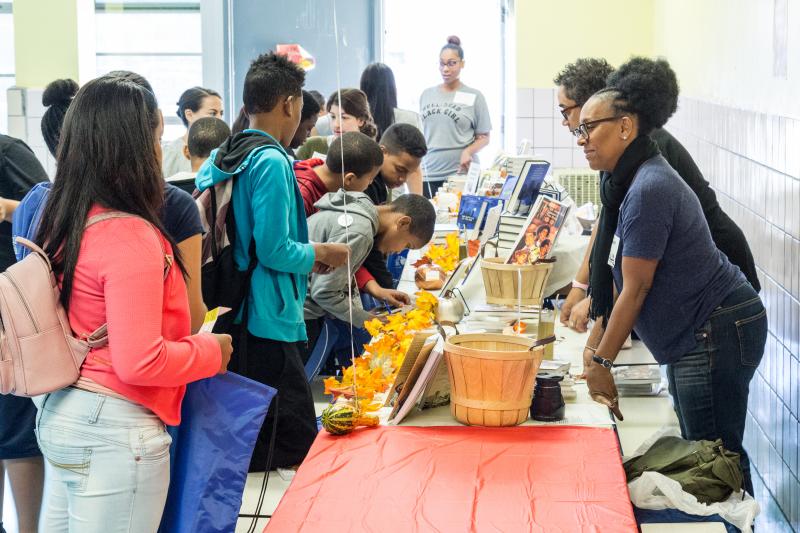 Boogie Down Books hosts "Fall Into Reading" at P.S. 224 in the Bronx.

The second phase of Fall Into Reading, in November, featured a series of book club meetings at the New York Public Library’s Mott Haven branch led by volunteer educators; several of the six books’ authors joined the meetings both in-person and via video conference. The diverse set of titles, chosen because of their connection to the Bronx or to New York City more broadly, included The Education of Margot Sanchez by Lilliam Rivera (S&S Books for Young Readers); They Both Die at the End by Adam Silvera (HarperTeen); and I Am Alfonso Jones by Tony Medina (Tu Books).

“Since that first event was funded by an outside organization, I wasn’t sure what was going to happen after, but then things just sort of kept happening,” Shoaf said. “There’s so much excitement right now about the idea of books in the Bronx that people just latched onto it and were like, ok, what are you going to do next?”

Since the fall, Shoaf has, among other things, hosted a program for Bronx teachers around the book Ghost Boys by Jewell Parker Rhodes (Little, Brown) with help from a private sponsor, through which she provided ARCs to participating educators and offered them strategies to teach the book in the classroom. Most recently, Boogie Down Books was a vendor at the Bronx Book Fair on May 5. Shoaf said she intends to keep collaborating with other Bronx organizations and businesses to continue “to bring the features and elements of a traditional independent children’s bookstore to varied spaces throughout the community.”

“We have a very strong partnership with Mottley Kitchen, a café in the South Bronx, and at that location we currently have a pop-up shop. We also have a lending library there and we do regular story times with crafts every other Saturday, plus special one-off events during the week as scheduled,” said Shoaf. Boogie Down’s next book event at Mottley will be a discussion on May 24 about The Doughnut Fix (Sourcebooks Jabberwocky) with middle-grade author Jessie Janowitz, featuring free donuts from the café. 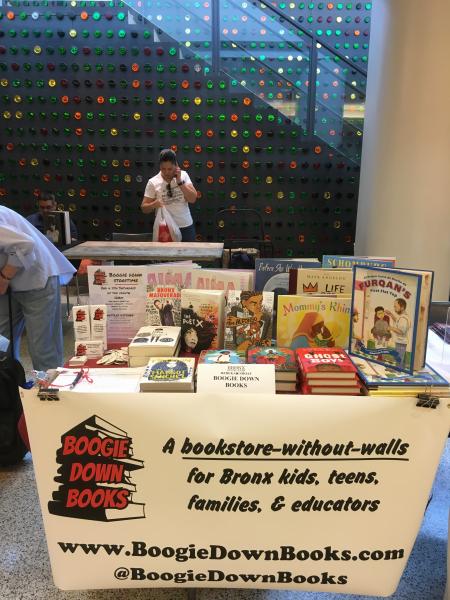 Boogie Down Books had a table earlier this month at the Bronx Book Fair.

“In the past, we have partnered with schools for public events as well as some private author visits just for that school community,” she added. “We also have partnerships for private events on an ongoing basis with a local family homeless shelter and after school programs, and new organizations are continuing to reach out to us.”

In terms of inventory, Shoaf said she usually offers a curated selection of about 20 books that she believes in and that have special resonance for the community. She reads all the books beforehand so she can personally stand behind each and every one, and she always offers books in Spanish, in addition to English, if they’re available.

“Diversity and representation is really, really important to me, so making sure that both the authors and the characters are representative of the wide range of backgrounds and experiences of our community is essential,” Shoaf said. “I am especially drawn to authors from the Bronx or who set their books in the Bronx.”

Some of her best-selling picture books include the English and Spanish versions of Islandborn by Junot Díaz (Dial Books), which she said she does not plan to re-stock following recent allegations of sexual misconduct; Alma and How She Got Her Name by Juana Martinez-Neal (Candlewick); and the 1982 title A Chair for My Mother by Vera B. Williams (Greenwillow Books). Her top-selling middle grade books include Ghost Boys and I Am Alfonso Jones, while The Poet X by Elizabeth Acevedo (HarperTeen) has been a top-selling YA title.

Shoaf said she also plans to bolster her pop-up stock by adding three of the books nominated for the 2018 One Book, One New York contest: When I Was Puerto Rican by Esmerelda Santiago (Da Capo Press); If Beale Street Could Talk by James Baldwin (The Dial Press); and the winner, Manhattan Beach by Jennifer Egan (Scribner). 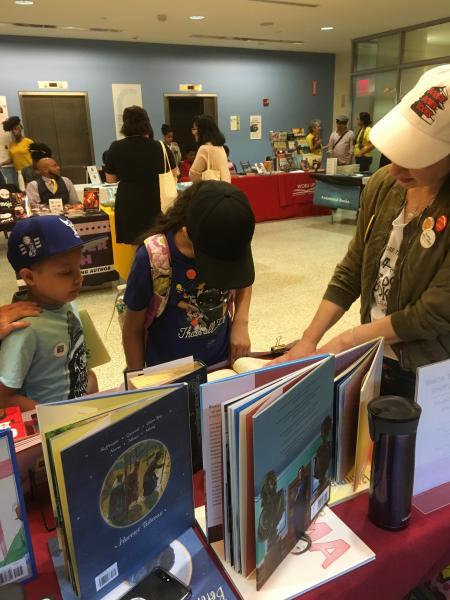 Children seek out titles that appeal to them at Boogie Down Books' pop-up at the Bronx Book Fair.

Shoaf is a friend of Noëlle Santos, another book-loving Bronxite, who will open her own brick-and-mortar indie bookstore and wine bar, The Lit. Bar, in Mott Haven this summer. The two share tips, support, enthusiasm, and advice and often cross paths at book events, including most recently at the Bronx Book Fair. Shoaf, who lives a couple of blocks from where The Lit. Bar is slated to open, said Santos worked as a volunteer at Boogie Down’s first pop-up event. Shoaf is also a member of Santos’ Readers and Shakers book club.

Unlike Santos, Shoaf doesn’t anticipate opening a brick-and-mortar location anytime soon, if ever. However, she told Bookselling This Week that she would love to someday have her own actual bookmobile that serves kids and families throughout the South Bronx and beyond.

“There are so many parts of the Bronx that we would really like to bring books to and there are also parts of the borough that are not as accessible via public transportation,” said Shoaf. “There are a number of neighborhoods that don’t have their own subway stop — you have to take the bus to get to the subway. It’s much more difficult for young people to go to a different part of the borough to go to a bookstore, so we would like to bring the bookstore to them.”