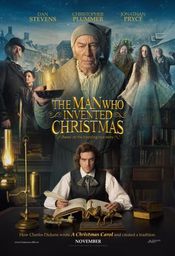 Adapted from the nonfiction book of the same title by Les Standiford, the movie blends history and fancy as star Dan Stevens portrays Dickens as he brings Christopher Plummer’s Scrooge to life both on the page and in his imagination.

Kaplan, the owner of Books & Books, which has locations throughout Southeast Florida as well as satellite locations in Key West and the Cayman Islands, is longtime friends with Standiford, author of 21 books and director of the Florida International University Creative Writing Program.

“I had read all of my friend’s books, and I said, ‘This book about Charles Dickens is really tremendous, and we could make a narrative version of this nonfiction book that I think could resonate very deeply,’” Kaplan said.

The Man Who Invented Christmas was a November 2008 Indie Next List pick. In her recommendation, Rona Brinlee, owner of The BookMark in Neptune Beach, Florida, said the nonfiction tome “reads like a novel.”

Talking to BTW in anticipation of the movie, Brinlee said it’s a “bookseller’s delight” because she anticipates new interest in both Standiford’s book and the original story.

“It’s about publishing, it’s about Charles Dickens, and it’s about Christmas. All these years later, we are still celebrating Christmas the way Charles Dickens tells us we should,” Brinlee said. “Mitchell deserves a lot of credit. He’s the one who brought this to the screen, and we’re not talking about a little movie. This is a great cast.” 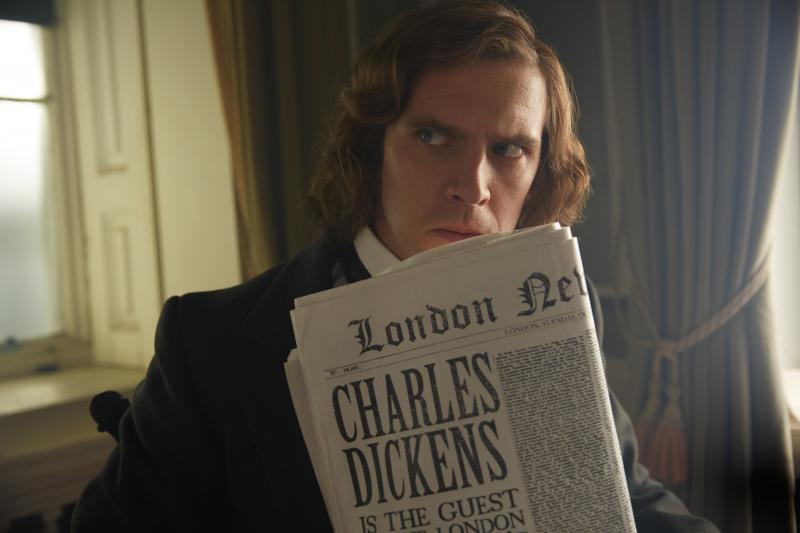 While A Christmas Carol has been made into dozens of movies, less known is the story of how Dickens came to craft the classic tale as a means to revive both his finances and his career after a string of setbacks.

In turns humorous and heartfelt, The Man Who Invented Christmas shows how Dickens tapped into his own childhood trauma as the son of a jailed debtor — played by Jonathan Pryce in the movie — to create characters and celebrate traditions that are part of the popular culture of the holiday to this day.

“It really is a very positive, forward-looking, upbeat film. The people who have seen it, many of them couldn’t keep a dry eye by the end of it,” Kaplan told BTW.

The screenplay by Susan Coyne, best known for the 2016 TV movie Anne of Green Gables, imagines the author’s writing process. “As the story comes alive to Dickens, the characters come alive, and Dickens engages in dialogue on screen with the characters,” Kaplan said. “You see the internal life of a writer and how he creates his story.”

Kaplan, a bookseller for 35 years, came to movie producing through a desire to tell the stories of the books he sells in a new medium. He partnered with Hollywood producer Paula Mazur to create the Mazur/Kaplan Company in 2006.

The pair began optioning books with the goal of developing them into TV movies and feature films. Reached in Los Angeles, Mazur said Kaplan’s love for stories and storytelling translates well visually. “Mitch has a remarkably good instinct on what books would make a good movie or TV series,” she said. “It’s like he’s got this intuitive compass.”

Mazur/Kaplan’s first acquisition was The Guernsey Literary and Potato Peel Pie Society by Mary Ann Shaffer and Annie Barrows (Dial Press), the story of a WWII-era literary society and the journalist who wrote about them. The movie version starring Lily James of Downton Abbey fame will be released in spring 2018, making it the second Mazur/Kaplan film.

“The fact that our first two films are about books is something I love. Guernsey is really about the love of books and the transformational nature of books as well,” Kaplan said.

Mazur/Kaplan has 15 projects in various stages of development. “The whole philosophy behind our company is if we love a book, we’re going to do whatever it takes for it to become either a film or television,” Kaplan said. “The way we work is we are creative producers. We don’t just raise money to get a film made. We are in there on every aspect of the film.”

While the company partnered with a studio for Guernsey, The Man Who Invented Christmas was produced independently, with Bleecker Street Films distributing the movie in the United States. Kaplan/Mazur produced the film along with Mazur’s husband, Robert Mickelson, and British producers Ian Sharples and Vadim Jean.

“My role is very involved in everything from raising money to reading screenplays to giving notes on what the screenplay is, giving notes on the dailies,” Kaplan said. “Even though I wasn’t able to be there full time, I watch each day all the filming that goes on.” 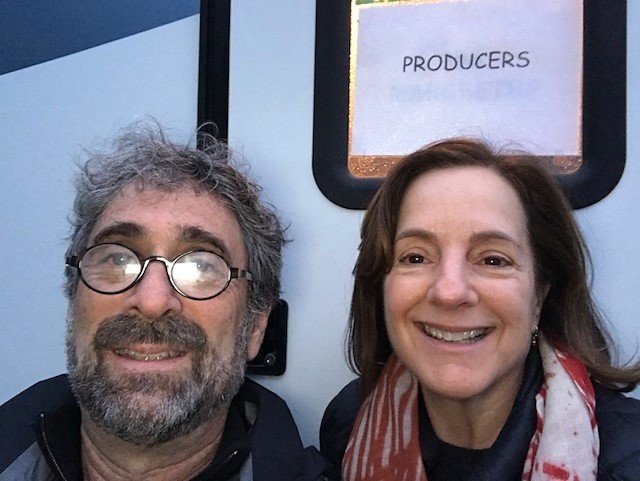 Kaplan spent about two and a half weeks on the Dublin, Ireland, set of The Man Who Invented Christmas. “My partner, Paula, is so talented that I was at her elbow watching and seeing what was happening and asking questions. For me, it was a learning process. It was kind of like my film school,” Kaplan said.

Author Standiford also traveled to Dublin. “We kept Les very much involved. He loved the script and loved the adaption. He visited the set for a while and acted like a kind of adviser,” Kaplan said.

Kaplan, who also went to Toronto for post-production, said he enjoyed working with the crew and director Bharat Nalluri, best known for Miss Pettigrew Lives for a Day. “The director is a brilliant guy,” Kaplan said. “We all want to gather together and make another film.”

Balancing the demands of Books & Books with being a movie producer has meant relying on his employees.

“I have a marvelous, marvelous staff. I could only do this if I had supportive and remarkable staff,” Kaplan said. “We have great managers, we have a great events and marketing coordinator, we have a wonderful business manager. The only way I could make this happen is by delegating and trusting the people I have working for me.”

Those employees will be on hand on November 20 when the movie premieres in Florida at the Coral Gables Art Cinema across from Books & Books. Afterward, there will be a Q&A with the director as well as the producers and Standiford.

The movie opens on 500 screens nationwide on November 22, the day before Thanksgiving.

“We’re very pleased that it’s opening on Thanksgiving weekend. The profile of it is going to be really high,” Kaplan said. “The film has a huge amount of humor in it. Dan Stevens is brilliant in it. He’s in almost every scene as Dickens, and he really captures the whole essence of Dickens.”

There will also be a panel discussion of the book and the process of creating the movie at the Miami Book Fair, which Kaplan co-founded.

He’s also hoping to arrange for field trips to theaters for middle and high schoolers in Miami to see the movie.

“It was such a positive experience, taking a book by a friend of mine who I’ve adored through the years, working that through the process, and having his vision come alive on the big screen, and now in Miami, being able to work with the cinema across the street and being able to work with the book fair. It’s been a coming together of a lot of the threads of my own life,” Kaplan said.

He is planning on transforming Books & Books into a Dickens’ wonderland for the holiday season with T-shirts, posters, and books on display. “It’s going to become The Man Who Invented Christmas Christmas for Books & Books,” Kaplan said. 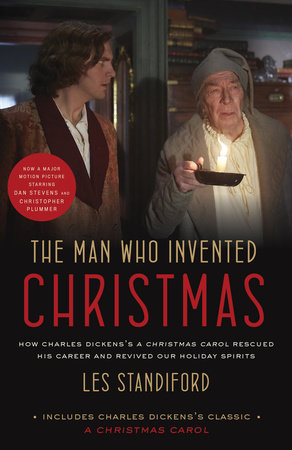 The movie tie-in edition of the book.

Kaplan said the movie could also be an inspiration to booksellers for holiday events and displays, including readings of A Christmas Carol. “This film is a remarkable opportunity for booksellers. We’re opening pretty widely, so we’ll be in every major city in every major market,” Kaplan said. “If a bookseller has a film opening near them, there are all kinds of interesting possibilities.”

Some ideas from Kaplan include approaching theaters about selling the movie tie-in book in their lobbies, offering cross-promotional opportunities to drive moviegoers into bookstores and vice versa, and offering a discount on the book to anyone with a ticket stub.

“There have been so many books written about Dickens you could create displays with the biographies,” Kaplan added.

If any bookseller wants to talk with him about a specific idea, Kaplan invites them to e-mail him at mitchell@booksandbooks.com.

Reflecting on the skills he’s gleaned in the years since he founded Books & Books in 1992, Kaplan said many translated to his new endeavor. Books & Books hosts 1,000 author events a year, for instance, and has three cafés.

“One of the things that booksellers don’t completely realize is that in doing what we do, we build up certain skills that are transferrable so that you can tackle new frontiers if it’s something that you’re passionate about,” he said.

Kaplan pointed to Becky Anderson Wilkins, owner of Anderson’s Bookshops in the Naperville, Illinois, area and candidate for Congress, as an example of another bookseller branching out to pursue a second career.

“Booksellers are some of the most talented people I know, and running a bookstore is one of the hardest things that anyone can do,” Kaplan said. “For me, it flowed from what I do, and I think that there might be opportunities in front of people that they are not aware of that flow out of bookselling.”