Half a year into the rollout of IndieLite, participating booksellers are reporting that the e-commerce platform is affordable, easy to use, and provides new shopping opportunities for their customers. The American Booksellers Association developed IndieLite, an alternative to the IndieCommerce platform, for bookstores just getting started in online sales and for those who want a simple, easy-to-maintain website.

Sue Roegge, who opened Chapter2Books in Hudson, Wisconsin, in 2011 with her husband, Brian, replaced the store’s static website, which provided only basic information about the store, with a site through IndieLite. “What we had settled on previously was a really barebones capability,” she said. 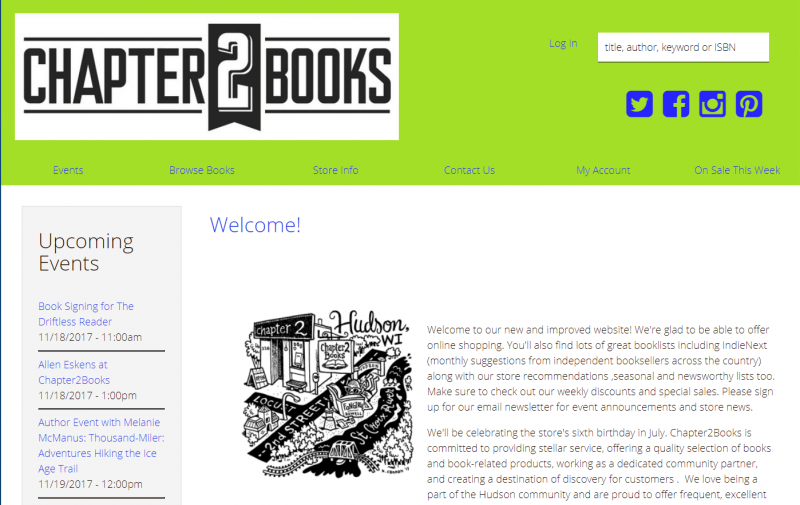 Customers of Chapter2Books now have access to nine million titles through its IndieLite site. Orders can be shipped to the customer’s destination of choice or picked up in the store, which Roegge and other booksellers are finding is the most popular option. “The majority of our purchases so far have been to pick up in the store,” Roegge told Bookselling This Week. “They say it’s a convenient way to follow through on a book purchase when they have it on their mind after hours.”

Chapter2Books’ IndieLite site also displays in-store events as well as ABA’s Indie Bestseller Lists, Indie Next List, Reading Group Indie Next List, and Kids’ Indie Next List, which are updated behind-the-scenes by ABA. “You could ignore it if you wanted to once you set it up,” said Roegge.

The $50 per month subscription fee is also winning accolades from booksellers. “We like the incredibly reasonable pricing for it,” Roegge said. “You really couldn’t go wrong with giving it a chance. We did want to offer e-commerce to our customers.”

Building the IndieLite site was quick and painless, Roegge added. “I was very happy with how much the IndieCommerce staff actually did,” she said. “It was beyond easy. They used the same color scheme we had going before. They took some of our content and fit it in. They gave us some sample websites to look at, and after that they set up the template.”

IndieCommerce Director Phil Davies said ABA built IndieLite as a low-cost alternative for members who either don’t need or aren’t ready for the more powerful IndieCommerce platform, which costs $175 a month.

“IndieCommerce is a full-blown, full-featured e-commerce platform that will do anything you need it to do,” Davies said. “The more time you put into it, the more it will do for you, but there is a learning curve there, and we’ve tried to reduce the learning curve for IndieLite so that it’s self-maintaining.”

Stores just starting in e-commerce can get their feet wet with IndieLite before diving into the more robust option of IndieCommerce, which allows stores to accept more payment methods and also sell non-book items online, among other extra features. “If you want to step up later to do IndieCommerce, we’ll help you do that,” Davies said.

Davies noted that some IndieLite customers are former IndieCommerce customers who did minimal online sales, such as Donna Fell of Sparta Books in Sparta Township, New Jersey, who turned to IndieLite after deciding IndieCommerce was more than she needed.

After a time with just a basic static website, Fell said she eagerly signed up for IndieLite when it was offered. “For $50 a month, it offers everything you need for a simple, clean, productive website,” she said. “I was able to customize info about the store and add pictures. You can put in your events. It offers everything.”

She likes how IndieCommerce staff linked her IndieLite site with her store’s Instagram so the photographs automatically feed into her front page. “Once a day, it refreshes and adds an Instagram picture,” she said.

With ease of use overall, including the automated Indie Next Lists and other bookseller-specific features, Fell is satisfied that she’s chosen the right platform for her store. The cost is the same as what she paid for the static website that wasn’t customized for her needs.

“It’s set up to be used by a bookstore,” she said. “The other company didn’t have any of that. I would have to import all the book jackets and the ISBNs. All that’s already up there for you.”

Davies said ABA listens to its members to tailor both IndieCommerce and IndieLite to their needs. “Everything we do is customized for our members,” he said. “Highly customized. The checkout process, the in-store fulfillment if you purchase online, syncing your offline inventory with your online inventory — these are things designed for booksellers. You can’t get that anywhere else.”

Bookstores do not have to give up their own websites to enroll in IndieLite, Davies noted. “Now that word is getting out about IndieLite and what it’s capable of doing, people are saying, ‘You know what? I can plug that into my WordPress site, and just have an e-commerce platform and not have to worry about it,’” Davies said.

Once Upon A Storybook in Tustin, California, kept its Squarespace site with its original domain, but added an IndieLite site to provide online shopping for customers. The transition between the sites is seamless and can only be detected by noting that the URL changes to include IndieLite.

“It really changed the way we do business,” Alexander said. “Now when people say something about Amazon, we can say, ‘You can shop online with us.’ They go to Amazon because it’s easy, and now we have an easy way, too. Just having the option of saying that has people rethinking Amazon.”

Alexander said she’s had between 20 and 30 orders since she added IndieLite in August, most from regular customers who are picking up their purchases in the store.

Because stopping into the store during the holidays with visiting family is a popular pastime for her customers, Alexander said she hopes the new online sales option will generate additional business. “We think it will be helpful for people sending gifts out of state, and for out-of-state customers sending gifts to grandchildren here,” she said.

Alexander had worried e-commerce might be too much work, but was persuaded to give it a chance after seeing IndieLite demonstrated at ABA’s Children’s Institute this past spring. The IndieCommerce team’s support, which included setting up the IndieLite site with the store’s color and logo, has made it easy. “They are wonderful about answering my questions and not making me feel like a computer idiot,” she said. “Most of us in bookselling aren’t computer geniuses. We work with the other side of the brain.”

Booksellers who will be attending the January 22–25 Winter Institute 13 in Memphis, Tennessee, can learn more about IndieCommerce by signing up for a one-on-one session with IndieCommerce staff.

More information about IndieCommerce and IndieLite can be found on BookWeb.