Following the election, bookstores are embracing their roles as sources of information and expression and as a community nexus, providing books, safe spaces, and other resources that people can use to navigate the post-election landscape. 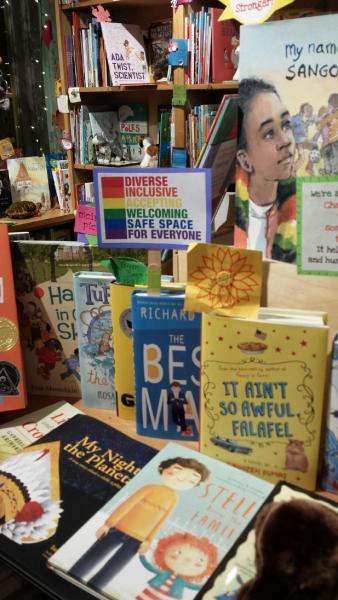 Display of titles on diversity and activism at Green Bean Books.

Jennifer Green, owner of Green Bean Books, a children’s bookstore on Portland, Oregon, set up a display of books that emphasize a message of diversity and acceptance. She posted a photo on her store’s Facebook page, accompanied by the following message: “Diversity makes us all better! We challenge you to read a book about someone very different than yourself. Learning about our different stories strengthens our ability to empathize and connect with each other!”

Among the books on display at Green Bean are A Is for Activist and Counting on Community by Innosanto Nagara (Triangle Square); Good People Everywhere by Lynea Gillen, illustrated by Kristina Swarner (Three Pebble Press); and Thunder Boy Jr. by Sherman Alexie (Little, Brown Books for Young Readers).

“We had an extremely positive and strong reaction to the display right away,” said Green. “We had a lot of people coming in the weekend after we put it up just to thank us for doing it and buying a lot of books on the display. I think people needed a place to go that felt safe, and I think bookstores really heard that.”

“At Green Bean Books, we’ve always taken stands on political situations and issues when they come up, like when the Orlando shooting happened,” Green added. “I think people can learn to be more compassionate and empathetic, and books are the perfect tool for that. After the election, parents were coming in like crazy, craving books that they could use to help teach their kids to think about the world in positive ways. It’s really been a joy to help them in that. As a bookseller, it’s a great role to be in.”

Diane Capriola, owner of Little Shop of Stories, a children’s bookstore in Decatur, Georgia, also created a book display and is compiling a list of titles that parents and teachers can use as a resource for talking about topics related to the election and its aftermath.

“We are pulling a list together now that will include books about empathy and compassion, racial equality, taking care of the earth, the immigration experience, and other topics,” she said. Currently on display are The Three Questions, written and illustrated by Jon J Muth (Scholastic), which has been regularly selling out; Be Who You Are by Todd Parr (Little, Brown Books for Young Readers); I’m New Here by Anne Sibley O’Brien (Charlesbridge); and Real Cowboys by Kate Hoefler, illustrated by Jonathan Bean (HMH Books for Young Readers).

Capriola said she is also developing a program on kindness that will last for the entire year of 2017.

“Each month we are going to focus on some issue or topic related to kindness and empathy that engages parents, teachers, and students. We’ll have story times for kids and workshops for parents and teachers to teach them how to navigate those issues with books. For example, in March, which is women’s history month, we will learn about gender equality. In July, we’ll talk about what it means to be an American.”

Capriola said she is also reaching out to publishers for book donations that the store will send to children in the local refugee community, located just 10 minutes away, in Clarkstown, Georgia.

Becky Milner, owner of Vintage Books in Vancouver, Washington, said neither she nor her store has ever really taken on an advocacy role, but the election has inspired her to reconsider that.

“We always made it a point not to talk with customers about politics or religion, but we’ve kind of changed our tune on that a little bit nowadays,” Milner said. “We just think it’s time to stand up and say let’s all think about the basic things we care about, like being good to each other, don’t discriminate, be welcoming to everybody.”

“I’m not sure where this is going to take us. Going forward, I think we’ll just be willing to be more spiritual, not necessarily active in a party sense but active on social issues,” said Milner. “We’ve tried to stay neutral in our community, which is fairly conservative. Even on our Facebook page, there were areas we wouldn’t go. But now I think we just want to say, this is where we stand.” 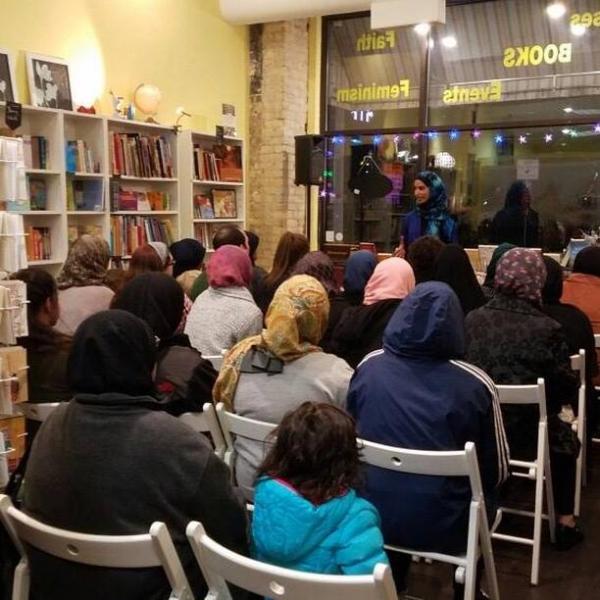 In recent days, Milner said she has posted quotes from Langston Hughes, Frederick Douglass, and Maya Angelou and quotes about being kind on Facebook. She’s also set up a vase of carnations at the front of the store, and people who are having an especially bad time are invited to take one.

Randy Schiller, an assistant buyer at Left Bank Books in St. Louis, Missouri, said staff has been doing its part to reach out to customers by promoting titles on display at the store. Some of the books on display for adults are Hillbilly Elegy by J.D. Vance (Harper); White Rage: The Unspoken Truth of Our Racial Divide by Carol Anderson (Bloomsbury USA); and It’s Even Worse Than It Looks: How the American Constitutional System Collided With the New Politics of Extremism by Thomas E. Mann and Norman J. Ornstein (Basic Books). Children’s books on display include Life Doesn’t Frighten Me by Maya Angelou, edited by Sara Jane Boyers, and illustrated by Jean-Michel Basquiat (Abrams Books for Young Readers); Cry, Heart, But Never Break by Glenn Ringtved, illustrated by Charlotte Pardi, and translated by Robert Moulthrop (Enchanted Lion Books); and We Came to America by Faith Ringgold (Knopf Books for Young Readers).

“Right now we are just focusing on displaying books in the store, but at some point we will have a list on our website,” Schiller said. “We do have our Ferguson Reads program, so we will possibly do something like that following the holidays, but we haven’t really gotten to that yet. People are definitely very interested in the display we set up. Sales are very good and that’s always a good sign. It’s a sign that people want to get involved.”

At Daybreak Press Global Bookshop and Gathering Place in Minneapolis, Minnesota, Anse Tamara Gray said that she has made her store, as well as herself, available to anyone who is feeling, uneasy, confused, or upset after the election. Located on the University of Minnesota campus, the store, which focuses on social activism and is served by an all-Muslim staff, has been a resource for students and community members looking for guidance and education or just a place to connect with each other after the election.

On November 9, Gray posted a message on Facebook confirming her personal availability that day: “If you are feeling afraid, lonely, alone, scared, if you are from a marginalized community, if you feel hated, we are here for you today.” The next night, Daybreak hosted a community conversation with local leaders from different cultures and races, who spoke in front of a turnout of 100 people, one of its largest events ever. The following night, the store hosted another well-attended event: a discussion with author Dr. Su’ad Abdul Khabeer about her new book Muslim Cool:  Race, Religion, and Hip Hop in the United States (New York University Press), which is grounded in the idea that Muslims are true Americans with a rich history in this country that extends to the music industry.

In recent days, Rabata, Daybreak’s sponsoring non-profit organization, joined with the local chapter of the National Council of Jewish Women for a “Women in Solidarity” dinner. Gray said both religious communities have really banded together during this time and plan to do more advocacy activities together in the future.

“We’ve been really thankful. There’s serendipity to the idea that we were recently established here on the university campus and now we’re in this place where we can contribute to the community during this time,” said Gray. “I feel like we have a unique opportunity now where we can hopefully help the community and individuals in some meaningful ways.”