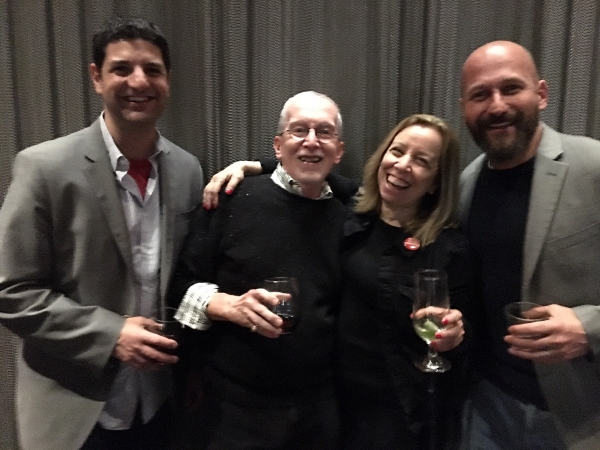 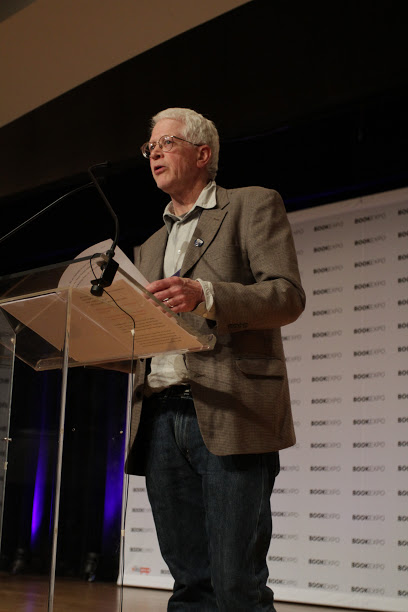 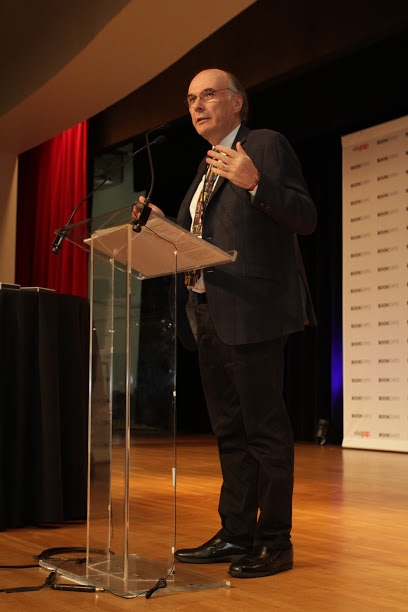 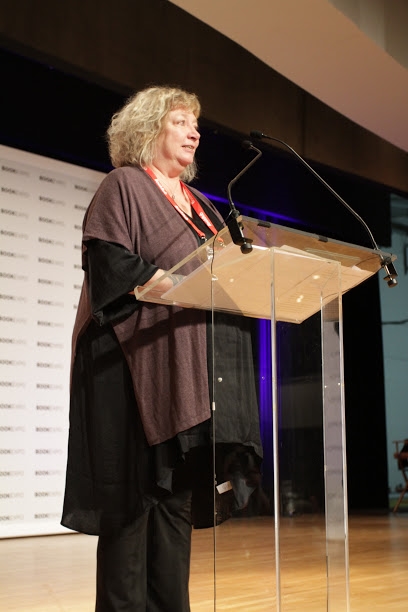 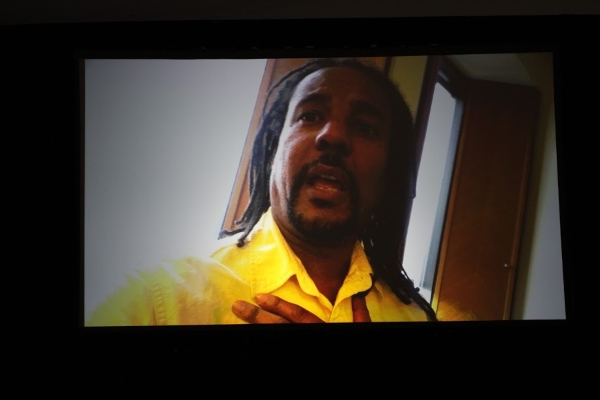 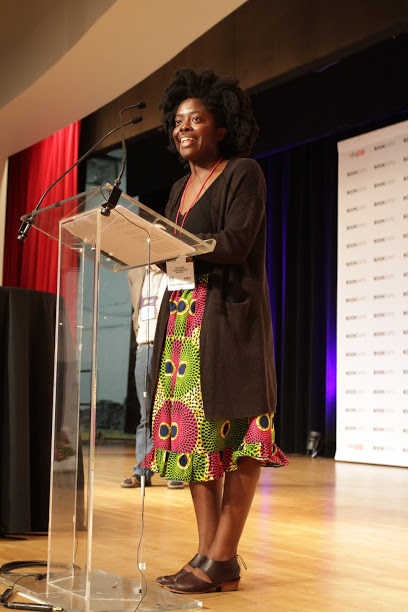 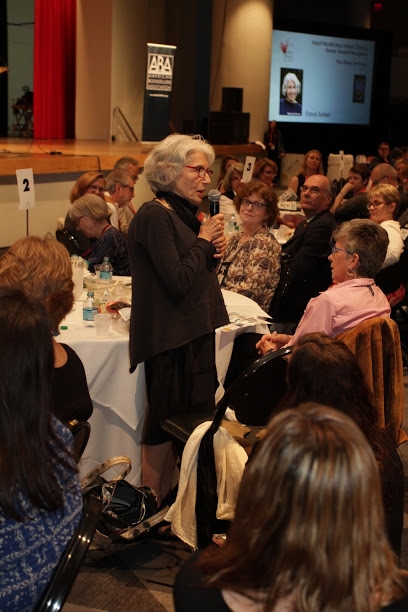 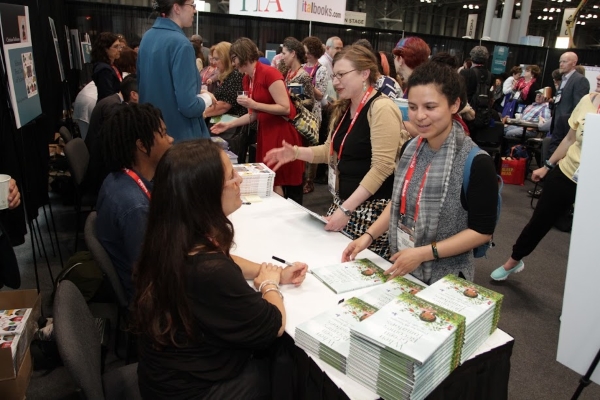 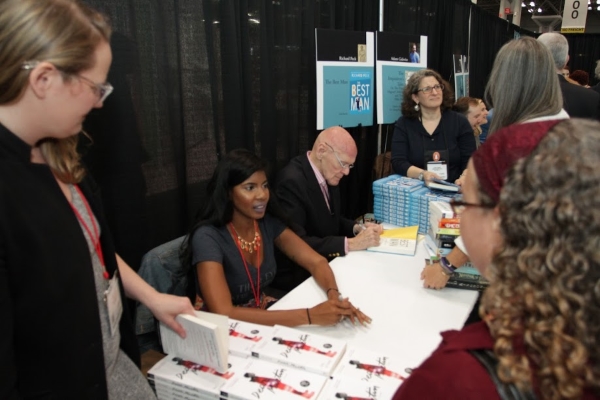 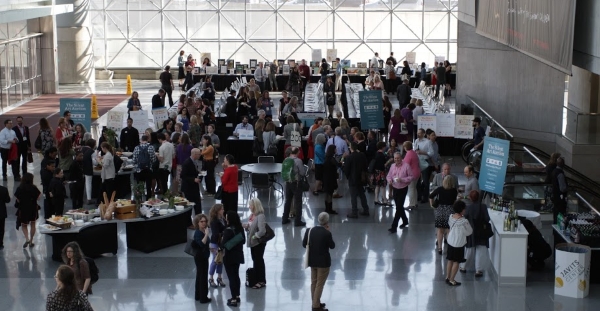 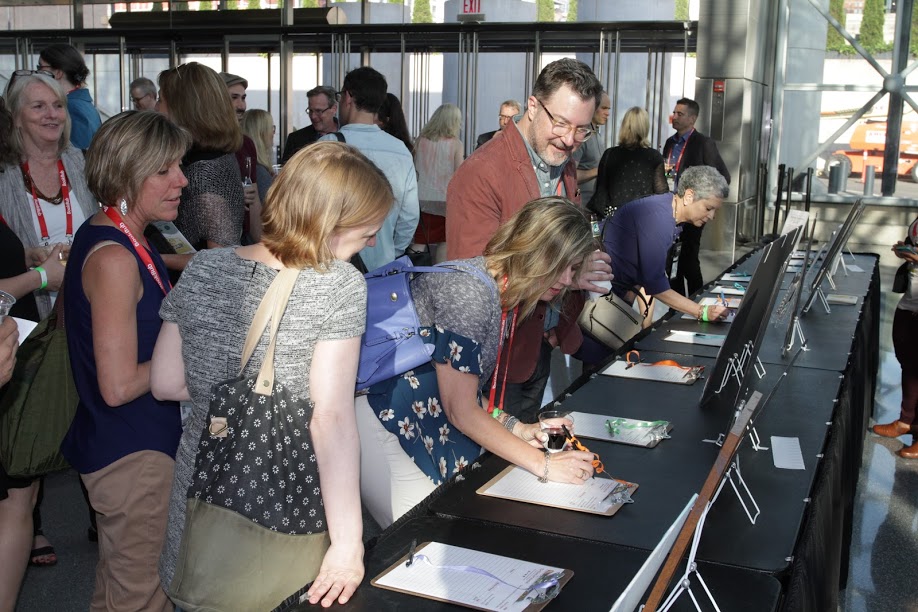 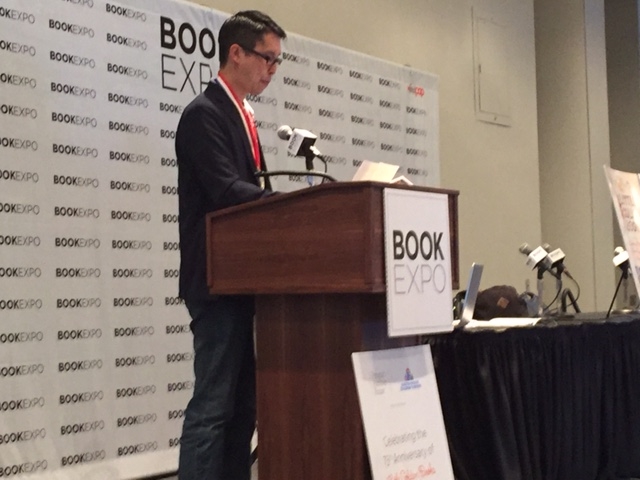 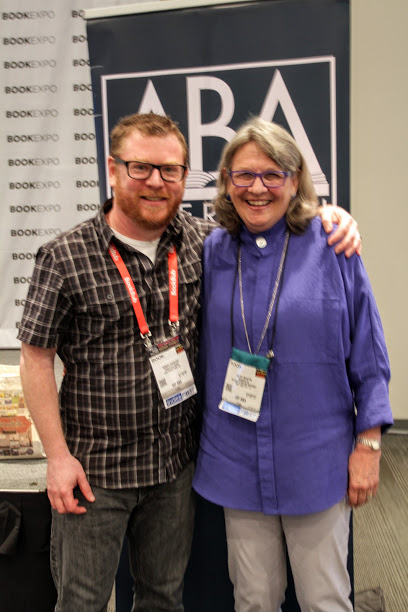 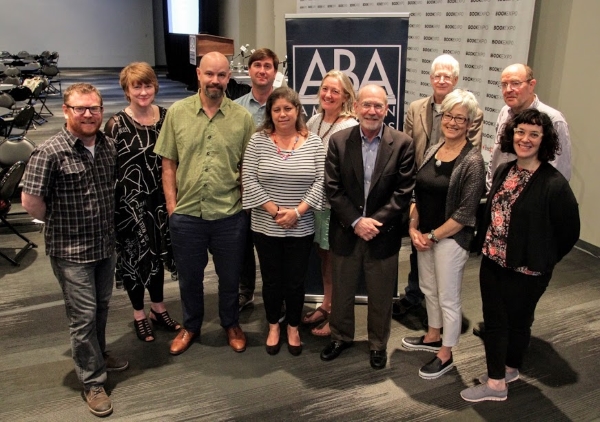 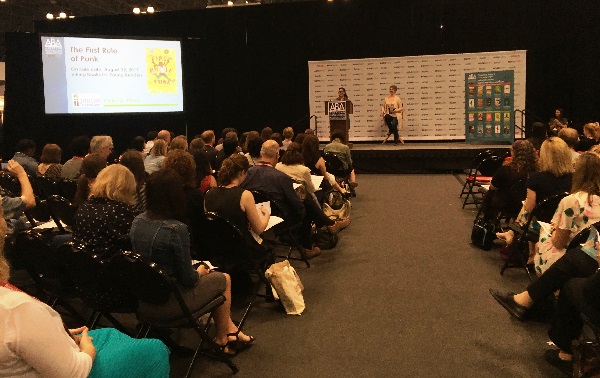 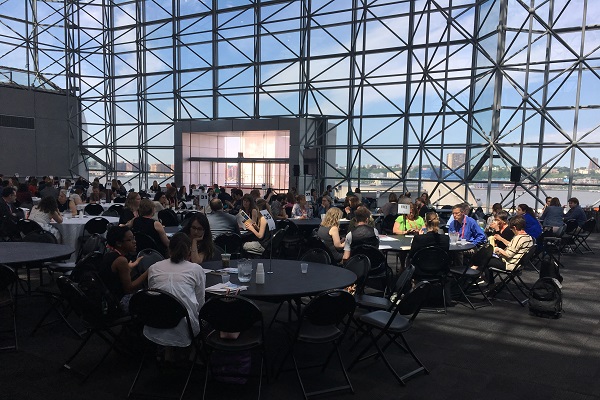 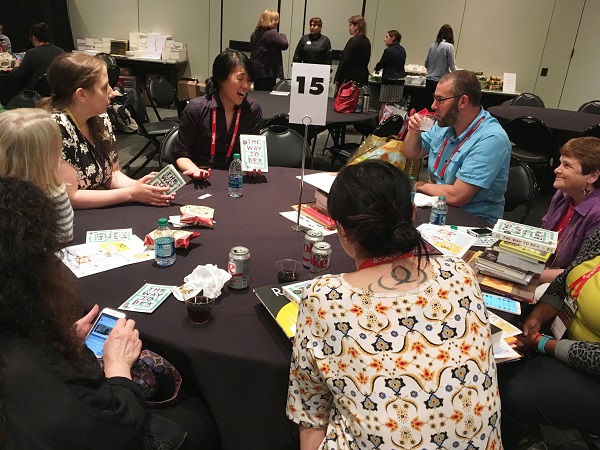 After a night of parties on Tuesday, May 30, one hosted by the small press member publishers of the Community of Literary Magazines and Presses and another by Penguin Random House, many of the American Booksellers Association’s members at BookExpo 2017 headed off on Wednesday morning, May 31, to “Meet the Editor” at publishing houses around the city for a behind-the-scenes look at the philosophy and process of book editing.

At noon on Wednesday, the place to be was ABA’s Celebration of Bookselling and Author Awards Lunch. The event featured the presentation of the 2017 Indies Choice Book Awards and the E.B. White Read-Aloud Awards, as well as an announcement that author James Patterson is expanding his 2017 Holiday Bonus Program for Booksellers. Following the celebration, many of the participating authors stopped in the ABA Member Lounge & Galley Room for the first of four autographing events exclusively for ABA member booksellers.

The lounge and galley room, which was located on the trade show floor, was a welcome place for booksellers to relax, have a snack, pick up galleys, and meet with their colleagues from across the country. Information on ABA programs and services from affiliated business partners, including LIBRIS, Libro.fm, Shelf Awareness, the Book Industry Charitable (Binc) Foundation, and W.G. Ellerkamp, was also available in the lounge, and ABA staff held one-on-one meetings with booksellers regarding IndieCommerce, advocacy issues, education, and more.

For the first time ever, this year’s ABA programming at BookExpo included two Publicists Speed Dating sessions. The first took place on Wednesday afternoon and the second was held on Friday morning. At each, registered ABA member bookstore owners, managers, and event coordinators had the opportunity to meet one-on-one with five to six different publicists to promote their stores and to discover what publicists look for when planning author tours.

A busy Wednesday was capped off with the Silent Art Auction to Benefit ABFE and Every Child a Reader, featuring the Children’s & Teen Choice Book Awards. Following the announcement of this year’s award winners by National Ambassador for Young People’s Literature Gene Luen Yang, booksellers, publishers, authors, and other industry professionals in attendance had the chance to bid on an array of children’s book art, including several works created to celebrate the 75th anniversary of Random House’s Little Golden Books imprint.

On Thursday morning, booksellers who served on the Summer/Fall Indies Introduce panels appeared on the Javits Center’s Downtown Stage alongside many of the authors whose works they chose as the best debuts of the upcoming season. Each participating author read a short passage from their book and answered a question posed by a panelist.

ABA’s Town Hall and the Annual Membership Meeting were held on Thursday afternoon. The Membership Meeting included the formal announcement of ABA’s election results, reports from outgoing ABA President Betsy Burton and from ABA CEO Oren Teicher, a membership and financial update, and the opportunity for members to bring old and/or new business to the attention of the Board of Directors.

The Membership Meeting was preceded by ABA’s Town Hall meeting, where booksellers shared their thoughts and concerns about a range of issues, including BookExpo, industry diversity, and programs for new and prospective bookstore owners.

Prior to the Annual Membership Meeting and Town Hall, ABA’s Consolidated Financial Statements (2016 and 2015) and Form 990 were made available to ABA members with a BookWeb username and password in the Governance section of BookWeb.org.

Thursday also featured three ABA education sessions: “Edelweiss+ for Booksellers,” “Hiring for Diversity,” and “For Authors: Working With Independent Bookstores.” (Watch for reports on all of ABA’s education sessions at BookExpo in upcoming editions of Bookselling This Week.)

Thursday was capped by “An Evening With Hillary Rodham Clinton,” a special appearance by the former presidential candidate and secretary of state. Clinton talked about her new book, to be published by Simon & Schuster this September, and an all-new, picture book version of It Takes a Village, her groundbreaking work on her vision for children in our country, to be published by Simon & Schuster Books for Young Readers.

Friday morning began with the Children’s Book & Author Breakfast and an exclusive autographing session in the ABA Member Lounge and round two of Publicists Speed Dating. An additional autographing session in the lounge featured Chris Finan, director of the American Booksellers for Free Expression (ABFE), signing copies of his new book, the July Indie Next List pick Drunks: An American History (Beacon Press).

At lunchtime, members of the ABC Children’s Group at ABA and friends of the Children’s Book Council enjoyed a lively lunch with more than a dozen children’s book authors and illustrators, who pitched their new projects during the ABC/CBC Speed Dating Lunch With Children’s Book Authors.

As BTW went to press, ABFE was scheduled to present the education session “Selling Controversial Books: A Conversation,” a discussion among a panel of booksellers. Watch future issues of BTW for full coverage.