As Indies First on Small Business Saturday approaches, booksellers across the country are increasing their efforts to encourage customers to shop local on November 25.

Whether they are tweeting with the hashtag #indiesfirst or updating their Facebook pages with news of authors who will be working behind the register that day or inserting fliers in customers’ shopping bags, booksellers say now is the time to get the word out. 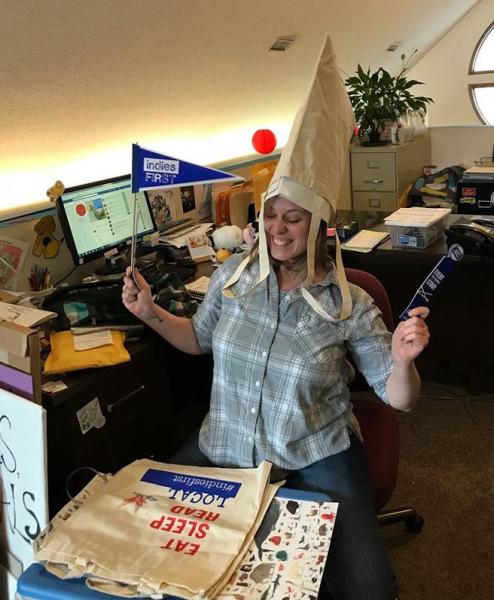 Red Balloon Bookshop in St. Paul, Minnesota, started a countdown on its Facebook page with a silly snapshot of Angela Whited, Red Balloon’s events and marketing manager, sporting this year’s Indies First tote bag as a hat and waving a pennant sent by the American Booksellers Association.

“We’re starting our #indiesfirst countdown today by getting ready in the only way we know how (by wearing random things as hats),” Whited wrote.

Social media is a major part of the store’s Indies First strategy. “We schedule a lot of posts in advance on Twitter, and we make sure to tag the authors,” Whited said. “If you’re doing Twitter, you’ve got to tag the authors. That’s where the good stuff is. They retweet and tell their friends.”

Authors Rick Chrustowski and Megan Maynor‏ have been sharing their eagerness to head to Red Balloon with their own Twitter followers. “I’ll be there with bells on!” Chrustowski tweeted.

In addition to tagging authors coming to Red Balloon to work as booksellers on the 25th, Whited has been retweeting this year’s Indies First spokesperson, author Jason Reynolds. 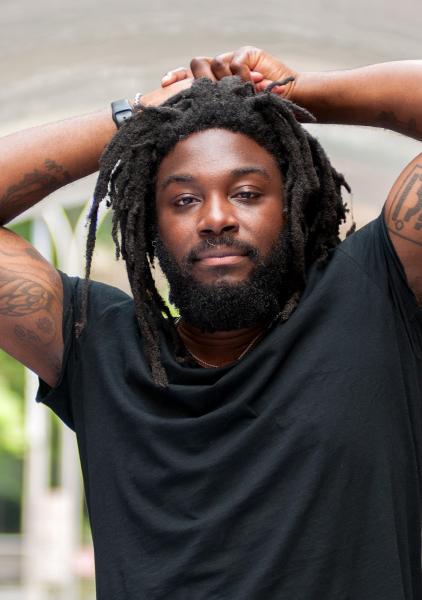 The best-selling young adult novelist is tweeting using the hashtags #indiesfirst, #localstacks, and #shopsmall. This week, he entertained his 18,300 followers with a series of tweets with fictional “testimonies” from shoppers at indie bookstores, including the words of an older woman named Tanya who goes to readings partly for the snacks.

“[Jason is] funny, and his posts are great,” Whited said. “It’s really great that he’s involved this year, too, because, A, we like promoting his books, and B, he’s totally making it fun.”

Reynolds is the fifth spokesperson for Indies First, which was launched by the American Booksellers Association in 2013 to bring together authors, readers, and publishers in support of independent bookstores on the Saturday after Thanksgiving.

Reynolds, author of the newly published Long Way Down (Atheneum/Caitlyn Dlouhy Books), is also encouraging his followers to enter the #shopindiesfirstsweepstakes, a special giveaway this year from the American Booksellers Association and Penguin Random House.

Between November 15 and November 26, Twitter and Instagram users who tag a U.S. independent bookstore and use the hashtag #shopindiesfirstsweepstakes will be entered to win $1,000 worth of books from Penguin Random House. There will be five winners selected in a random drawing in December. The bookstores named in the winning posts will also receive $1,000 worth of books to be donated to a local nonprofit.

Rob Eckman, marketing manager at The King's English Bookshop in Salt Lake City, Utah, said he also likes to leverage the popularity of the authors who visit for Indies First.

This year, Gabriel Tallent, author of #1 September Indie Next List pick My Absolute Darling (Riverhead Books), will be at the store for two hours in the afternoon, and Jennifer Adams, author of the BabyLit series, will be selling books in the evening. “That’s the fun thing,” he said. “The authors get excited. We ask the authors to share on social media so their communities are aware.”

Eckman has also promoted Indies First on the store’s calendar, in mailings that reach 10,000 subscribers each Monday, as well as face to face with customers.

The King’s English also participates in Local First Utah and a local Shift Your Spending Week, which goes from November 24 through December 2, by offering 15 percent off everything in the store all week. “We promote Shift Your Spending and shopping local at every event,” Eckman said. “We talk about it year-round.”

“We’ve been passing out fliers in the store,” she said. “I’m pretty confident that we’ll have some sort of write up in the paper next week. The book editor is usually pretty nice about that.”

Koehler, a member of the American Booksellers Association Board of Directors, noted that while social media posts can go up quickly, newspapers often appreciate more notice about events. 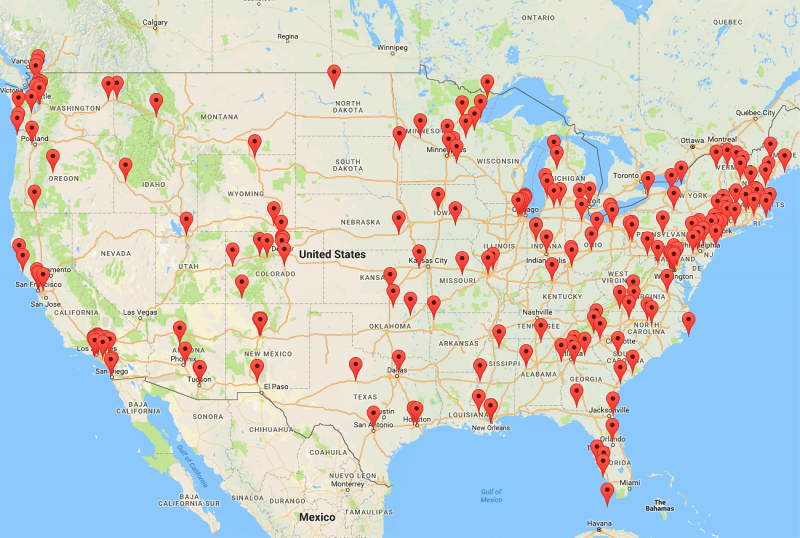 Last year, a record-breaking 563 independent bookstores across all 50 states participated in the fourth annual Indies First on Small Business Saturday. To date, this year’s Indies First map features hundreds of stores across 44 states, but Alaska, Hawaii, Nevada, Rhode Island, Tennessee, and West Virginia are still waiting for an indie bookstore to sign up.

Blue Willow’s plans for Indies First changed in the wake of Hurricane Harvey, which made landfall on August 25, and flooded vast sections of the city. The store plans to donate a portion of sales to aid the Kendall Neighborhood Library, which was damaged by Harvey. Kendall’s children’s librarians will lead a special story time at 11:00 a.m.

While Blue Willow has never partnered with another group for Indies First, Koehler said the strategy could be a good one for other bookstores, too, as long as it’s a local organization with wide appeal.

The best strategy for promoting Indies First is ensuring that the message — whether on social media or on signage or in newsletters — conveys the personality of the individual bookstore, Koehler said.

“It needs to be unique to you, even though Indies First is a nationwide movement,” Koehler said. “People shop at your store because they like you. You have to make that key. You’re participating with your fellow band of booksellers, but at the same time, you’re you. We don’t look or act like some other stores in the ABA. We each have our own flavor.”

“Stress that it’s not about consumerism, it’s about understanding that indie bookstores fill a need in the community,” Newton said. “This is a way to help local bookstores to continue.”

There are a number of resources available to help booksellers promote Indies First and Small Business Saturday:

Booksellers can visit the Indies First page on BookWeb.org to learn more about this annual event. Questions about Indies First can be directed to indiesfirst@bookweb.org.