Booksellers around the country continue to respond to the events that took place in Charlottesville, Virginia, earlier this month, when a “Unite the Right” rally brought white nationalists, KKK members, and neo-Nazis to the University of Virginia campus to protest the removal of a Confederate statue. The evening before the August 12 rally saw clashes between protesters and counter-protesters at the site of a Thomas Jefferson statue; more violence took place at the next day’s rally at Emancipation Park. 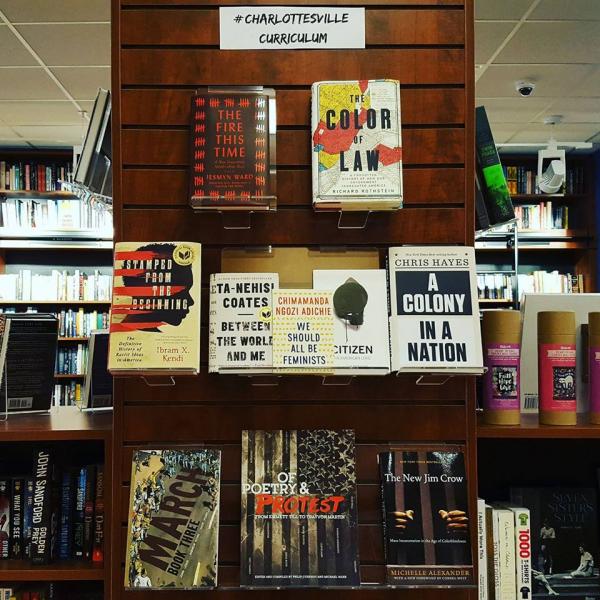 Booksellers at Belmont Books in Belmont, Massachusetts, created a #CharlottesvilleCurriculum display composed of books about racism and white supremacy.

On August 12, following the rally, a 20-year-old white supremacist mowed down a crowd of marching counter-protesters with his car, injuring 19 and killing one, 32-year-old Heather Heyer. Charlottesville’s New Dominion Bookshop is located at the intersection of where that attack took place.

New Dominion’s assistant manager, Robert Lazo, said the decision had been made about a week prior to close the shop on the day of the rally due to concerns for employee safety as well as to allow employees to take part in the counter-protests that Saturday if they chose. The vehicular attack took place on the street right next to the store, where people have since left flowers as a memorial to Heyer. In the days following the violence, New Dominion has received many messages of love and support from customers and from community members, Lazo said.

“We’ve had a lot of people come into the shop to see how we were and to make sure that we were alright after the rally, but also just to go out onto the mall to try to show that we are still here, that Charlottesville has not been made cowardly by the actions of these violent groups,” said Lazo. “At the bookshop, we’ve just been doing our best to be a safe space for anyone who wants it, especially since we are right by the memorial, to be the place where people can come into the air conditioning and be inside for a while.”

“Mostly, people have been wanting to talk about it,” added Lazo, who said that some staff did participate in counter-protests and in the vigil for Heyer. “It’s just been a hard thing for everyone to talk about in general, but of course we all need to. That is the whole idea of a bookshop, to be a place where people can be in conversation with each other. A lot of people have come in to express their anger about what happened. This has also been move-in week for the University of Virginia, so people from all over the country have been dropping by to express their sympathy and their condolences.”

While the volume of foot traffic on the mall has returned to normal, Lazo told Bookselling This Week that New Dominion Bookshop will continue to have the important conversation about what they can and should do going forward.

At Print: A Bookstore in Portland, Maine, co-owners Emily Russo and Josh Christie composed an e-mail to customers to express their dismay at the weekend’s events and to announce a course of action that would benefit a Charlottesville nonprofit.

They wrote, “After the horrific events in Charlottesville, Virginia, this past weekend and President Trump’s refusal to condemn white supremacist activity, we at Print want to do everything we can to fight back. Here’s one thing: from now until the end of the year, $5 from every purchase of Ta-Nehisi Coates’ new book, We Were Eight Years in Power: An American Tragedy (out October 3), will be donated to the Charlottesville-based non-profit African American Teaching Fellows, an organization working to increase diversity among teaching staff. As store owners, we want to use whatever influence we may have to continue to fight for equality.”

In New York, Rebecca Fitting, co-owner of Greenlight Bookstore in Brooklyn, wrote how she takes her role as buyer/curator for Greenlight seriously, with a sensitivity toward the world and political climate, just as fellow co-owner Jessica Stockton Bagnulo does when curating events for the store. The idea, Fitting said, is to create stores and environments that are politically and culturally sensitive, while remaining politically neutral. This can be a delicate balance to strike, but one that is intregral to how the bookstore functions as an accessible and welcoming place where customers can seek out knowledge and information.

Fitting wrote, “Since the lead-up to the election, my response to every pivotal national or world event has been to ‘go to the stacks.’ To shore up our selection of books, to elevate the right kind of information so that people are better able to find it. While everyone was flocking to JFK to protest the ‘Muslim ban’ I went home instead and ordered books so that in the days after, when people came down from their impulse-reaction highs and wanted to learn and understand more, they had access. I could be one body at JFK, or five copies of the Koran on the shelf in my stores.”

That same mode of thinking kicked in after Charlottesville, Fitting wrote, when she sat down at her computer one night to order some books for the store.

“I ordered a book about the history of the KKK, which as a buyer felt important but as a person made me incredibly sad,” she wrote. “I reordered all the books where we try to understand white people (seriously? It’s almost a category at this point), and I made sure the stock levels were high on books about Jim Crow, racism, and prejudice in the history of our country and in our contemporary world.”

On August 14, Belmont Books in Belmont, Massachusetts, posted a notice on Facebook inviting people to a non-partisan candlelight vigil at a local church to stand in solidarity with Charlottesville and against violence and hate. The event was organized by the Belmont Stand Up Campaign and the Belmont Religious Council.

That same day, Belmont Books also posted a photo picturing books for people to read after the events of Charlottesville. The post read, “Wanna learn more about the history behind the protests in Charlottesville? We’ve got you covered. #CharlottesvilleCurriculum.” Co-owner Kathy Crowley said two of her booksellers, Kristen Bezner and Susan Bernhard, had read about the Charlottesville Curriculum hashtag online, which aims to crowdsource books and resources for educators looking to promote classroom conversations about the underpinnings of racism and white supremacy.

Becky Anderson, co-owner of Anderson’s Bookshops in Naperville, Aurora, Downers Grove, and La Grange, Illinois, and candidate for Congress in Illinois’ 6th District, wrote about Charlottesville on Facebook, stating that while it would be easy, even understandable, to want to move on after Charlottesville, it would also be a mistake.

“Denouncing the KKK, white supremacists, neo-Nazis, and individuals and organizations that advance an agenda of hate is an important gesture, but those words must be backed with action,” she wrote. “At our bookstores, we do more than just talk about stamping out intolerance and championing inclusion—we act. Last year our Naperville Reads, a city-wide reading program, brought in diverse authors, illustrators, and books to reach nearly 7,000 first- and second-graders at an age when they are forming important, long-lasting values. We also brought in the youngest survivor of Auschwitz to speak to all of the 8th grade classes of District 203, providing an authentic, personal insight into what hate and intolerance yields. Because of our role in the community, we have a unique ability to reach young readers and their families on issues that are critical to all of us, and we take that role seriously.”