Bookselling’s Next Generation: An Interview With Mariana Calderon

Bookselling This Week is kicking off a new column profiling younger indie booksellers who are having an impact on their stores and communities, whether that means developing a specific store initiative, cultivating a positive environment in their community, or just being ultra-creative in their bookselling work or management style.

BTW’s first profile subject is Mariana Calderon, 27, who in 2018 left her job as a café staff member and general bookseller at Chicago’s Volumes Bookcafe to move to her dream city of Denver, Colorado, and work as a bookseller at children’s bookstore Second Star to the Right Books. Just two months in, Calderon was promoted from bookseller to the position of store manager. 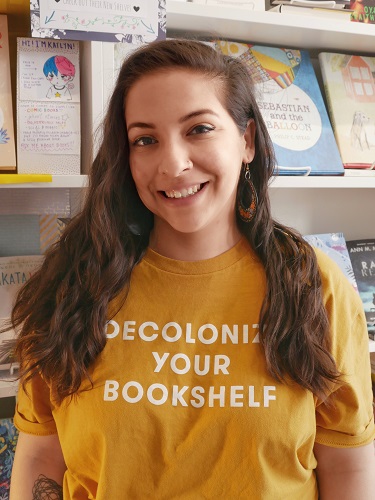 Mariana Calderon, store manager and event coordinator at Second Star to the Right in Denver, Colorado

During her time at Second Star to the Right, Calderon has been involved in various store initiatives and community projects, including the store’s public advocacy against Amazon’s encroachment in Denver with the #ChooseIndie campaign. In March 2019, after news broke that Amazon would be opening one of its signature bookstores downtown, Calderon penned an open letter to the community highlighting the vitality of Denver’s indie bookstore community.

The letter reads, in part: “We at Second Star to the Right Books wanted to take this opportunity to re-introduce ourselves, our bookstore, and the magic of an independent bookstore … Denver — you’ve got at least 10 bookstores helping shape your communities and being shaped by community. You’ve got a choice here, and we ask that if you’re able, you make the choice that will strengthen that connection. Choose Indie Bookstores.”

Posted on the store’s website and social media pages and later picked up by the press, the letter contained some of the reasons why Denverites should visit the city’s many indie bookstores, and even mentioned a few of them by name. Later, the store’s followers shared the letter on social media; customers mentioned it on their next visit, and stores that received a shout-out such as The Bookies and Kilgore Books & Comics reshared the post.

“The #ChooseIndie letter was a way to sort of take a stand, more than anything,” said Calderon. “Booksellers I’ve talked to say that as a bookstore you don’t necessarily always have to respond every time Amazon does something you don’t like. But I’m kind of scrappy. I have a hard time stepping back from things like that, especially something that so directly affects the neighborhood, which I’m sure many booksellers can relate to. But really, instead of being against Amazon, I wanted it to be a moment to tell the community, We exist, but even if you don’t like us there are these other wonderful bookstores in Denver all over the place,” she said.

Calderon told BTW she started her bookselling journey after leaving a restaurant job for the café at Volumes, where she worked for two years. During that time, her supervisor also trained her on the bookselling side, which she ended up loving. But, said Calderon, she really genuinely began to see bookselling as a career and to develop her network of fellow booksellers after attending ABA’s 2018 Winter Institute in Memphis and Children’s Institute in New Orleans.

“I do think my definite turning point was being able to go to Winter Institute on a scholarship, which was amazing, and that’s really made me stick with it and think this is really what I need to be doing,” she said. “I think it’s so important to get those newer booksellers to those conferences because that’s where people really see the difference they can make in the community.”

In contemplating her move to Denver, Calderon said she discovered Second Star to the Right on a visit and fell in love with the store, was interviewed by owners Dea and Marc Lavoie, and hired soon after. Calderon came on as a bookseller in September 2018, working her way up to become manager and event coordinator just a few months later. The store’s lead bookseller was leaving for another opportunity, said Calderon, and the owners realized they would need a manager to support the store, which had recently moved to a new location.

And as a first-time manager and event coordinator, the transition wasn’t the easiest, but Calderon said she had a lot of support from the owners and staff.

“I really like managing. I’m a fan of procedures, I’m a real fan of delegating,” she said. “And I’m a really big fan of trying to encourage the staff to come up with their own ideas and run with it. I think that’s been really important for us, especially in a new neighborhood. We have a staff member who loves story times and comes up with all these different themes and ideas; I just like to give booksellers that flexibility when it comes to their ideas so that they can dig up the materials and just do it. I think it is really important.”

“Part of my managing philosophy is that in bookselling, the booksellers are the stars,” she added. “They are the reason bookstores can exist and can succeed, so you really have to give your staff the ability to take their own passions and run with them and create those wonderful community-building events in the store.”

Another aspect of her management philosophy, she said, is education, both of the staff and the local community, about the role of bookstores in the wider industry, including in contrast to Amazon.

“I see over and over again that so much of this challenge in competing with Amazon isn’t that customers want to go to Amazon and take a sale from us; it’s that they just don’t understand and don’t know the difference,” she said. “I have had customers at an event tell me they pre-ordered the book on Amazon, and I have to go through this whole moment of education with them, explaining that Amazon is a completely different industry and we don’t liaise with them in that way but you can always pre-order from us, etc.”

“One of the things I’ve done as a manager is try to put out resources for the staff with facts about the industry, like ABA’s statistics that show a high percentage of growth in recent years, with more bookstores opening than closing. These are really simple things that staff can gently tell customers when they bring up Amazon or express surprise that indie bookstores are still around.”

In addition to pushing store initiatives like #ChooseIndie, Calderon has helped Second Star get involved in A Room of One’s Own’s Bookstores Against Borders campaign this summer, which raised money for refugees in detention centers at the southern U.S. border. The project was important, she said, because of the solidarity it generated and the cause it supported, but also personally for Calderon, who is Latina and whose family comes from Mexico.

Other highlights include Calderon’s use of social media to interact often with customers and the wider book industry — earlier this year, she starred in the store’s HarperCollins Facebook Live video. She also started the store’s LGBT/YA book club; coordinated Second Star’s first Find Waldo Local event, in which 23 businesses participated; launched the store’s twice-monthly bilingual story time; and created a detailed training binder for her booksellers.

“Most recently we did a book launch for Lindsay Lackey, a debut middle-grade author, whose book, All the Impossible Things, featured a main character who is a foster kid. Ten percent of our proceeds from that event went to the Adoption Exchange, a local adoption/fostering group and community,” she said.

Calderon said Second Star is often involved in partnerships with community organizations, which are arranged with help from the staff’s community liaison. She recently made contact with the Colorado chapter of Latino Outdoors, a nationwide nonprofit that works on increasing accessibility to the outdoors for Latinx people as well as increasing Latinx visibility in the outdoors, reaching out to do a thematically related story time for one of the organization’s family events. The store also collects for several charities and features a permanent drop-off box for the local food bank and a collection spot for a local group that supports homeless youth.

When it comes to actual books on the shelves, both the store’s and her own, Calderon told BTW she is passionate about #OwnVoices titles and representation in literature. Personally, her reading tastes span YA, sci-fi and fantasy, literary fiction, and more. At the moment, her favorite authors include Ashley Herring Blake for middle grade and YA fiction, M.K. England “for their fabulously fun and inclusive YA, and Sarah Gailey for anything at all that comes from their brilliant mind.”

“I love absolutely everything that Tor.com publishes, and I think every store should stock their novellas,” added Calderon. “N.K. Jemisin is an icon, and Victoria/V.E. Schwab is just a genuinely great person as well as another brilliant writer across genres. And everyone should read Gabby Rivera’s Juliet Takes a Breath, and then also petition for Marvel to bring her America Chavez comics back because we need more queer Latina superheroes.”

Calderon received her higher education at the College of the Atlantic in Maine, where she studied international environmental policy and human ecology, the study of humans’ effects on the environment, such as climate change. But she told BTW that while she has always been the type to want to change the world, at first it was harder to see bookselling as a field that would have that kind of far-reaching impact.

“After getting out of school it was initially very hard to find a job, so I did a bunch of different things before getting into bookselling,” she said. “And although I love it, at first, I struggled a little bit philosophically, because I still have a lot of friends who are on the front lines, who I see doing organizing and activism work, and sometimes I would feel like, what am I even doing?”

“But I had such a moment at the first Winter Institute because other booksellers of color would literally come up to me and point to me and see my name and say hey, you’re one of us, we stick together, we’re enacting change in our own way here,” she said. “That was such a turning point for me because the reason I am still in bookselling, aside from just loving it, is that for me, hand-selling those books to people who otherwise have not seen themselves in literature is a way to make a difference in the world, person by person, book by book.”