A Bookselling Adventure in China 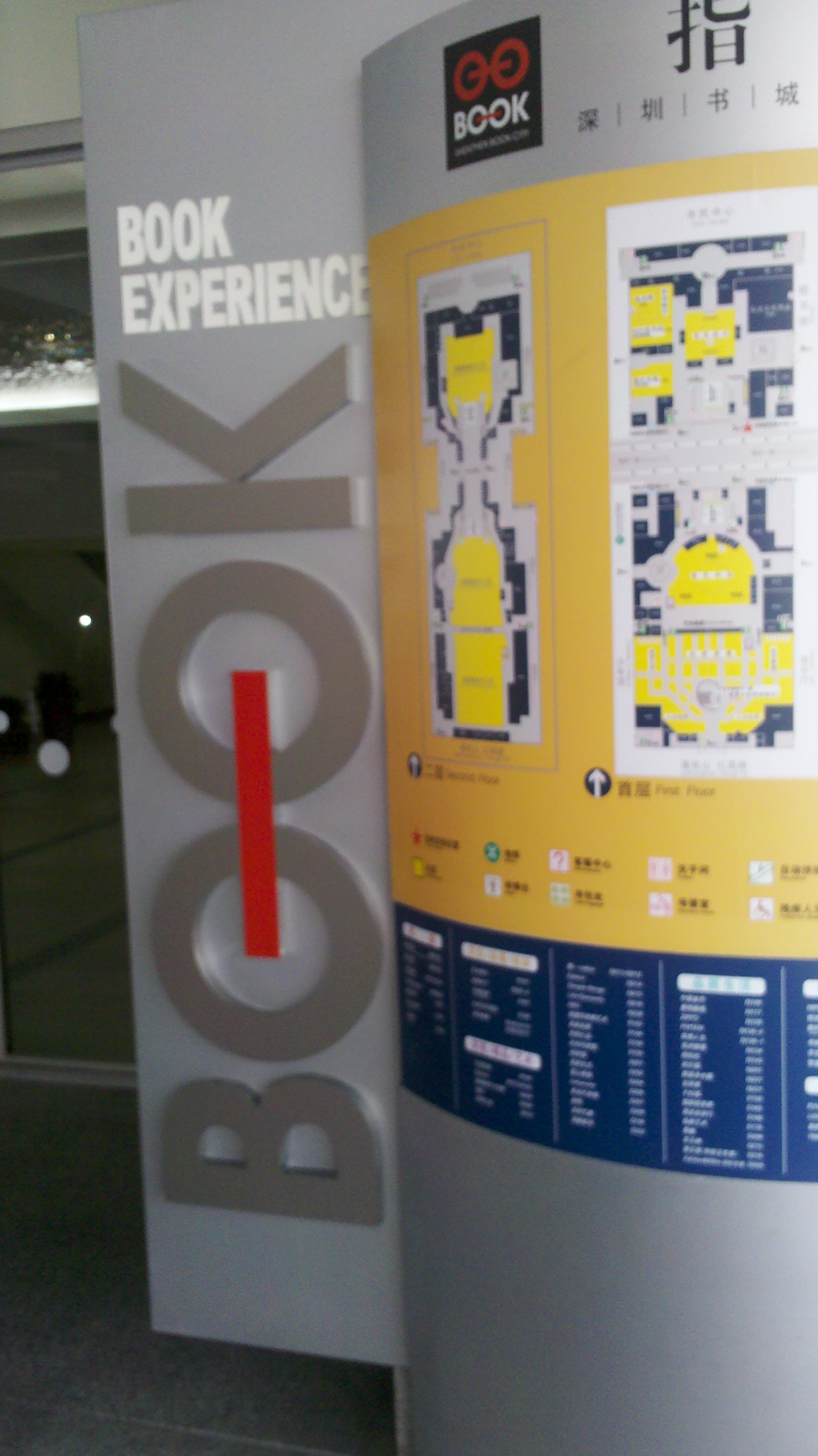 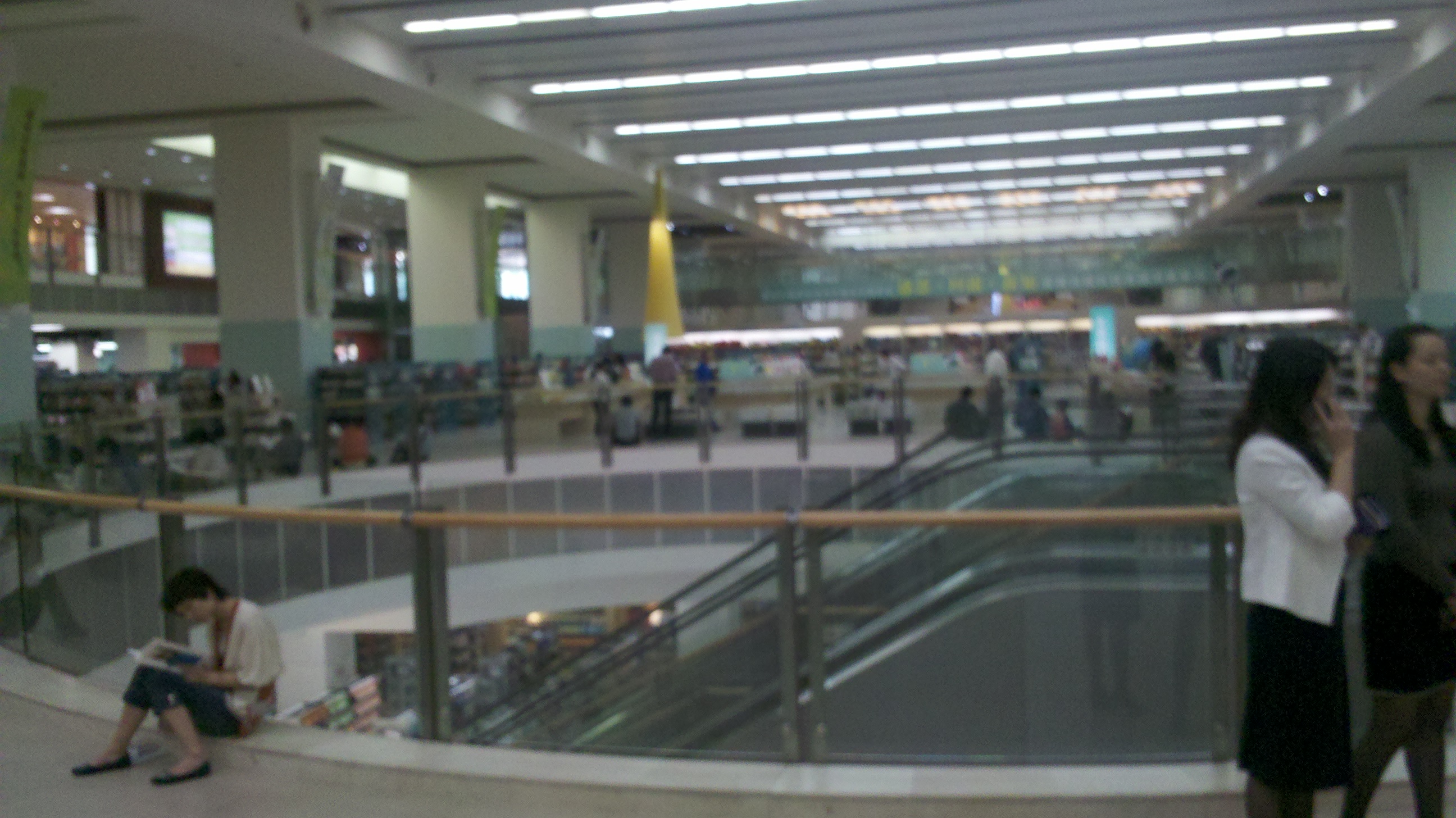 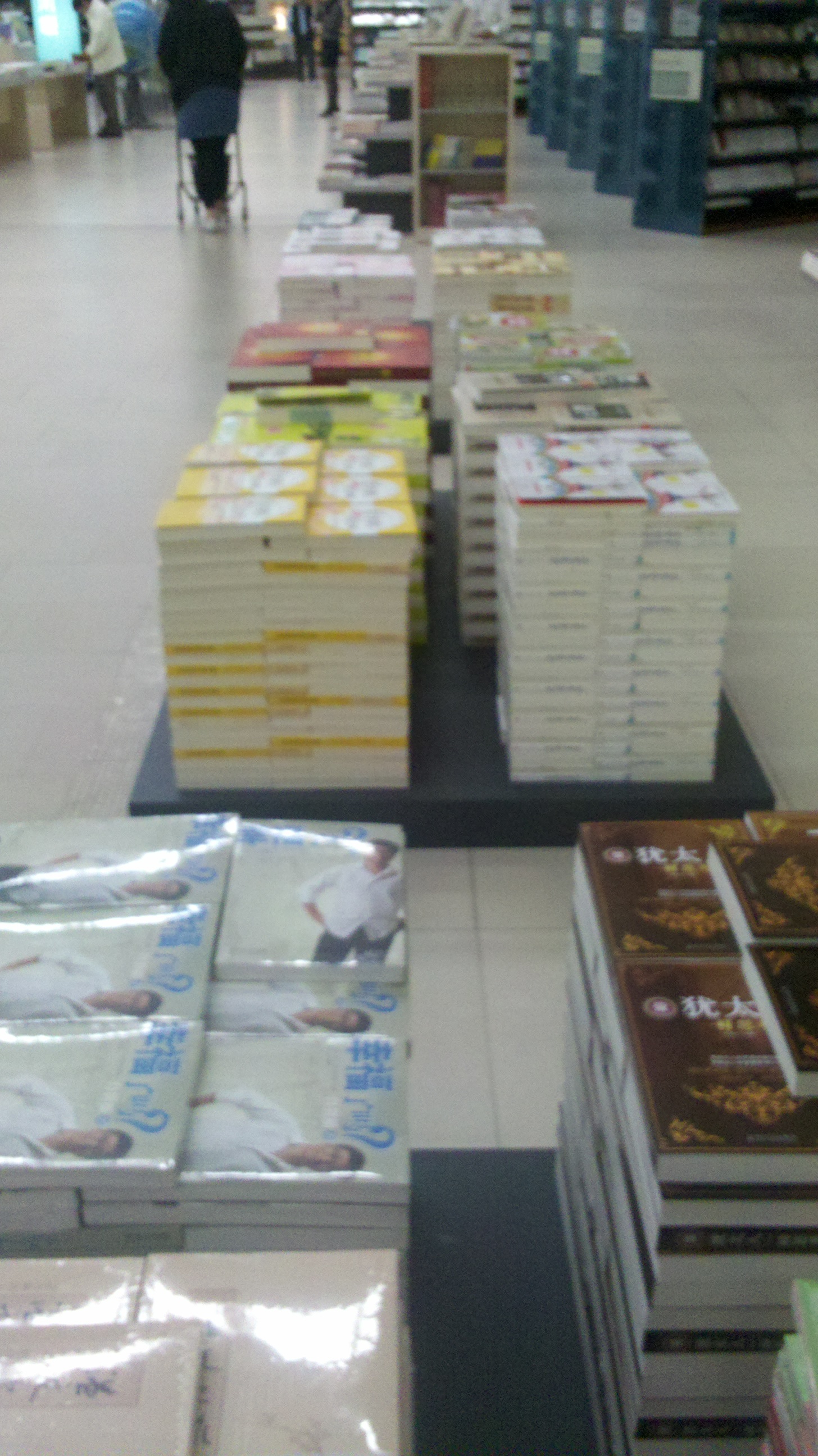 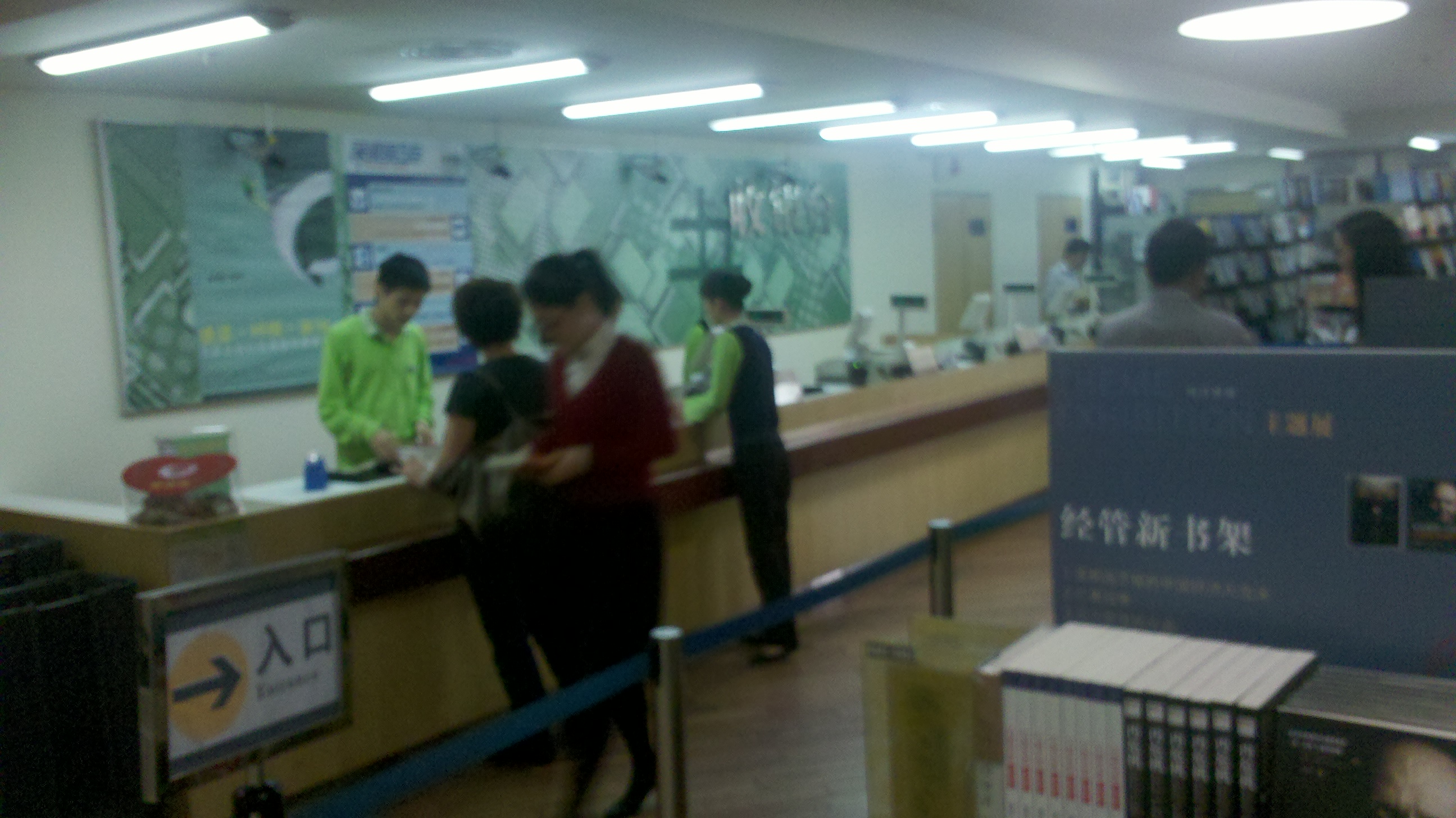 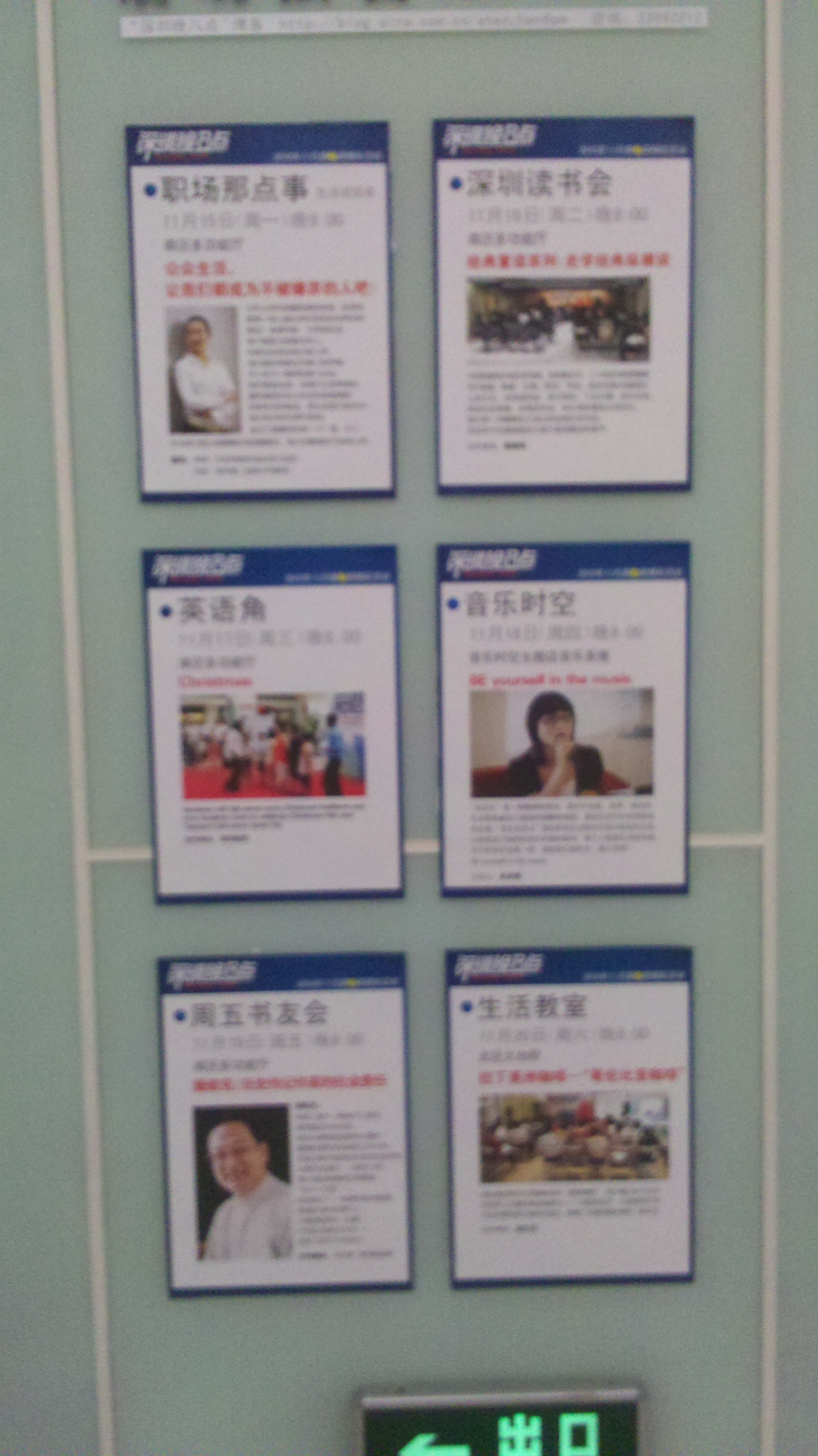 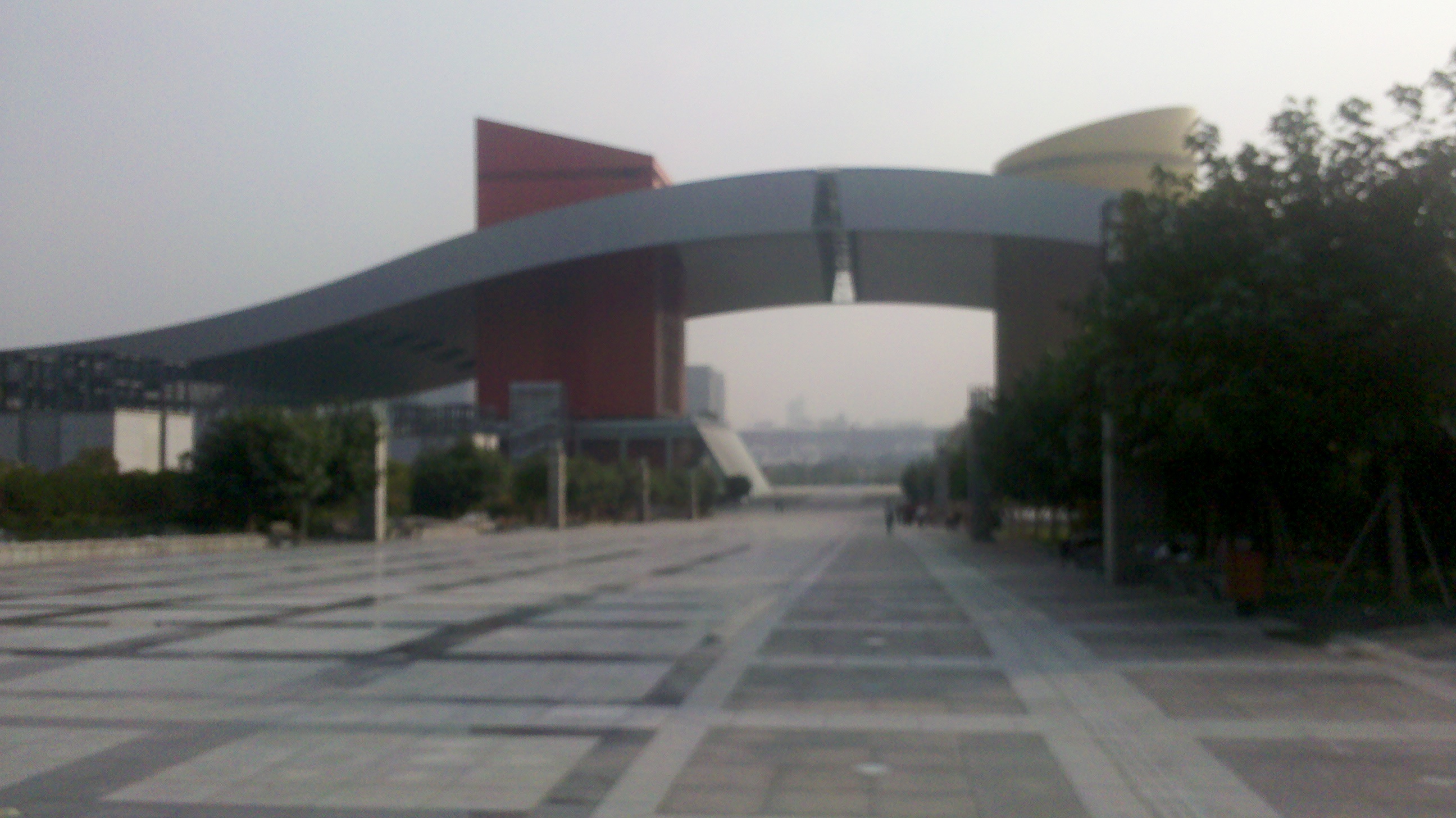 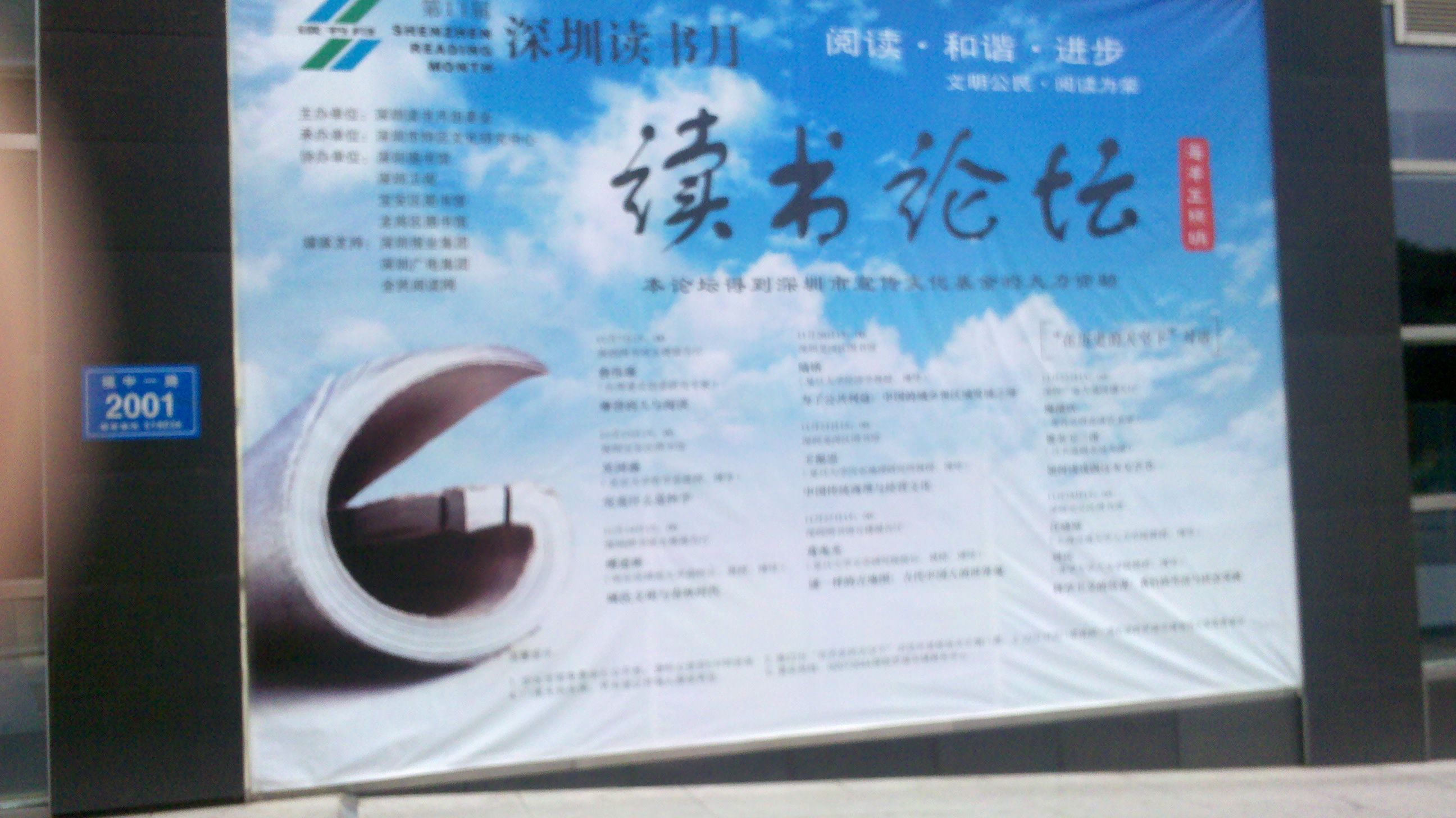 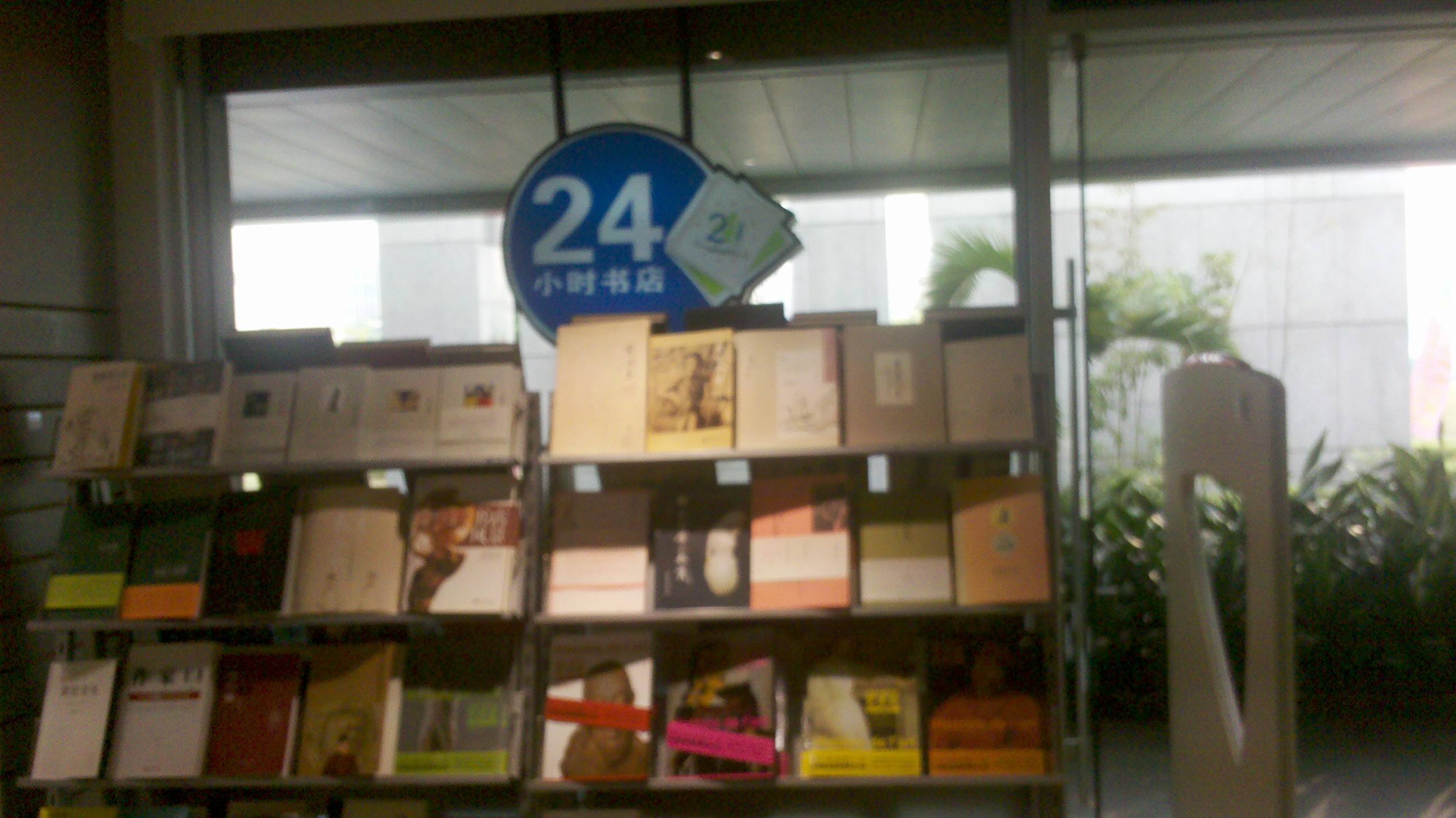 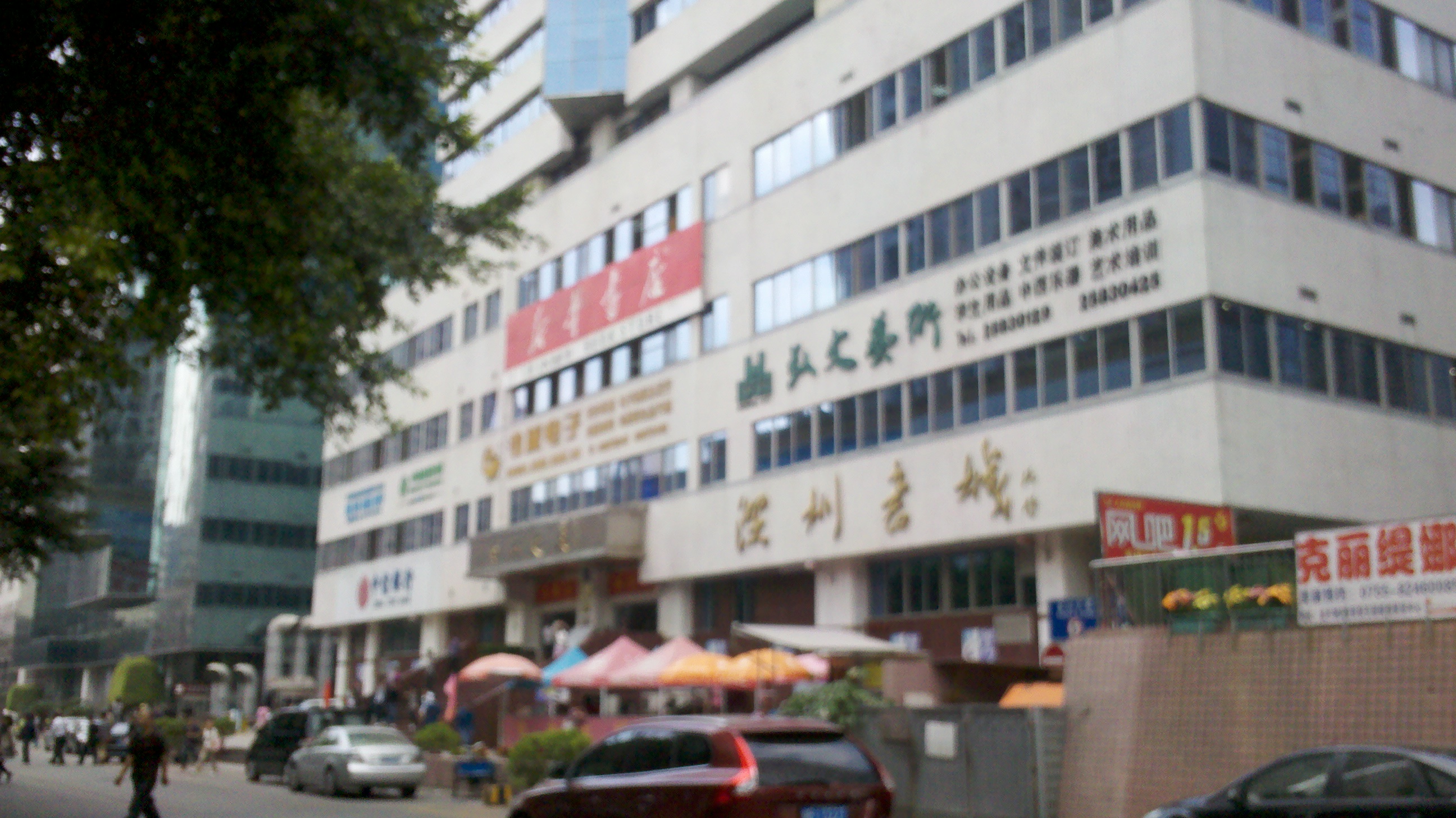 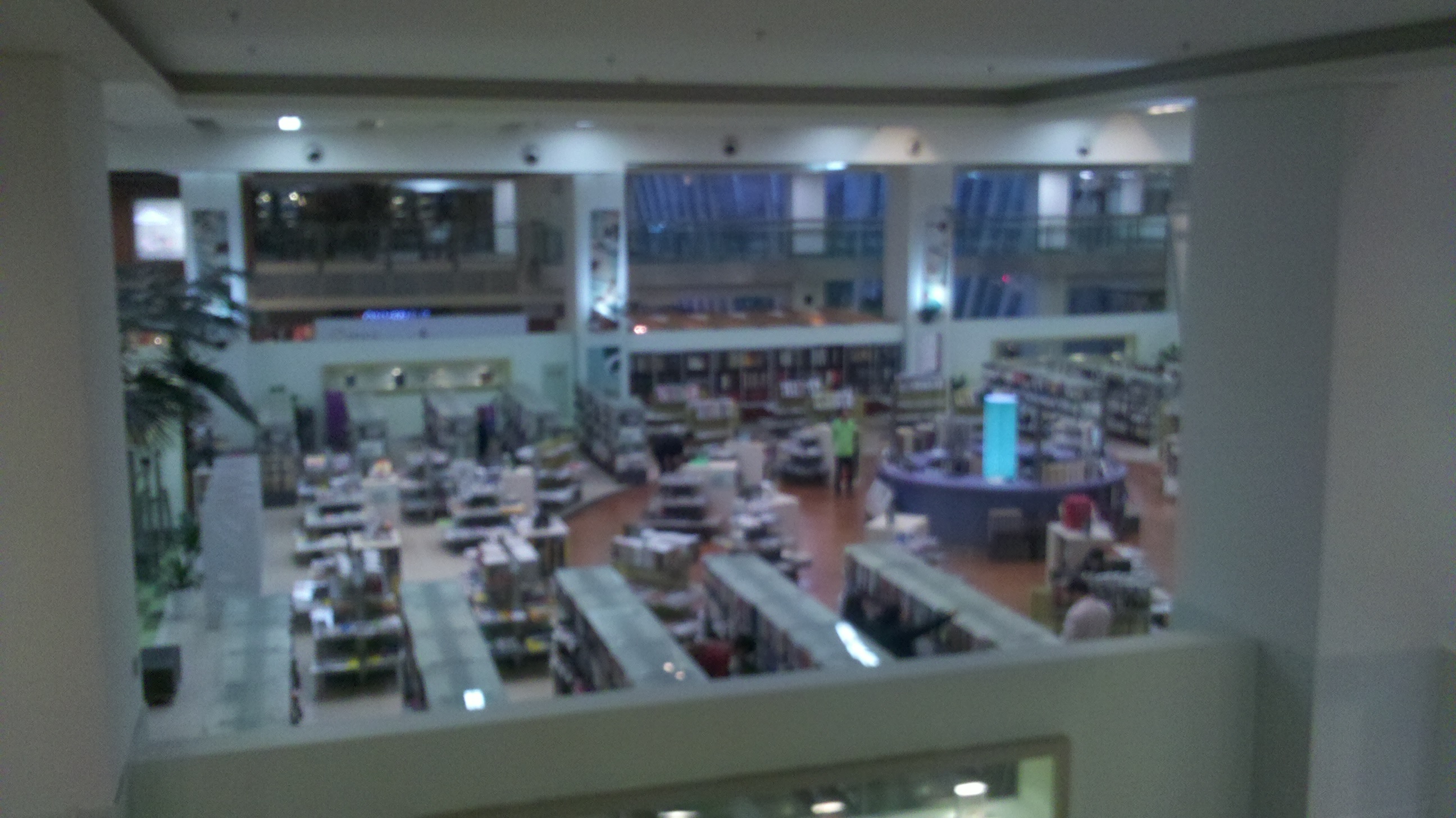 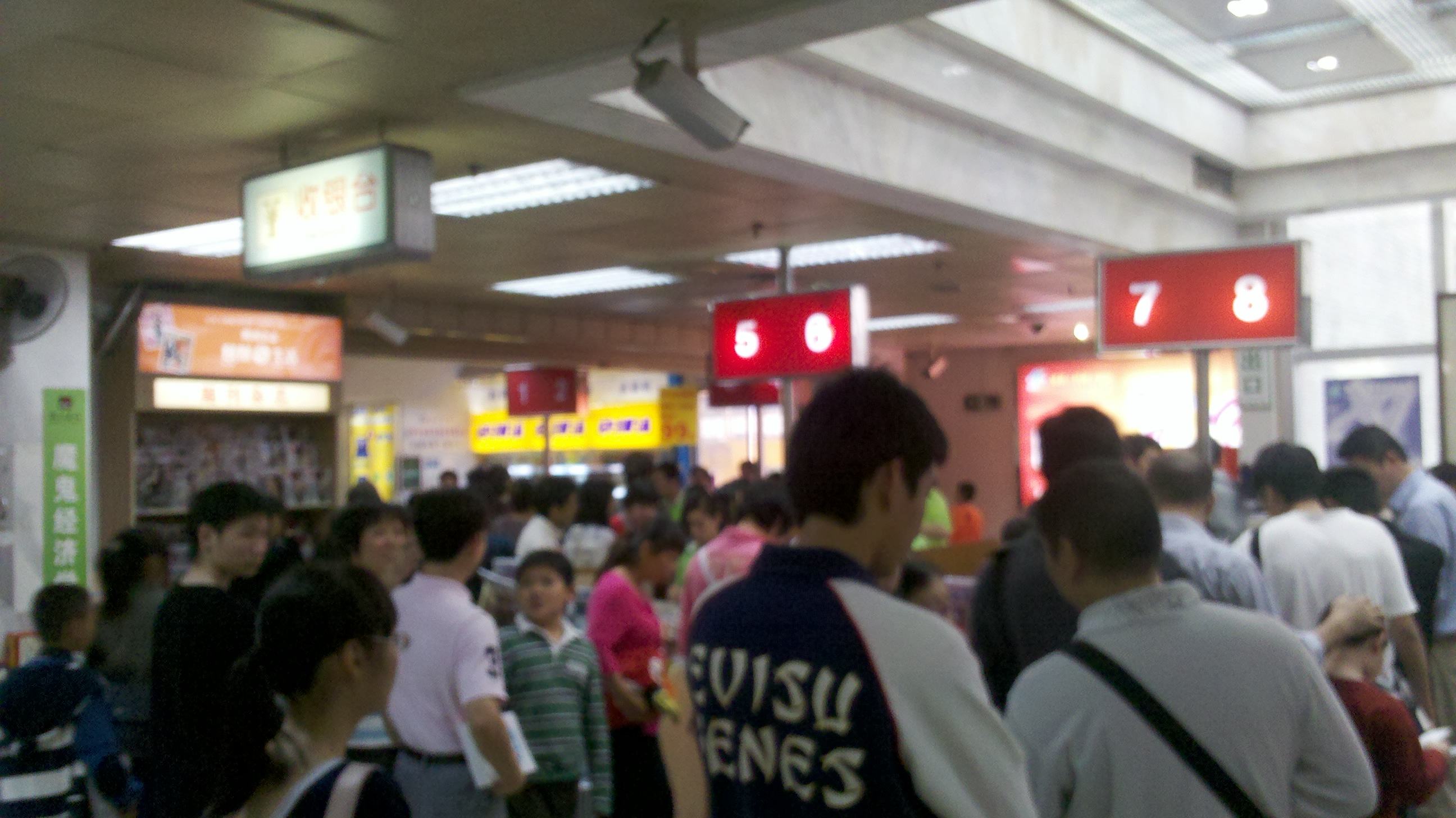 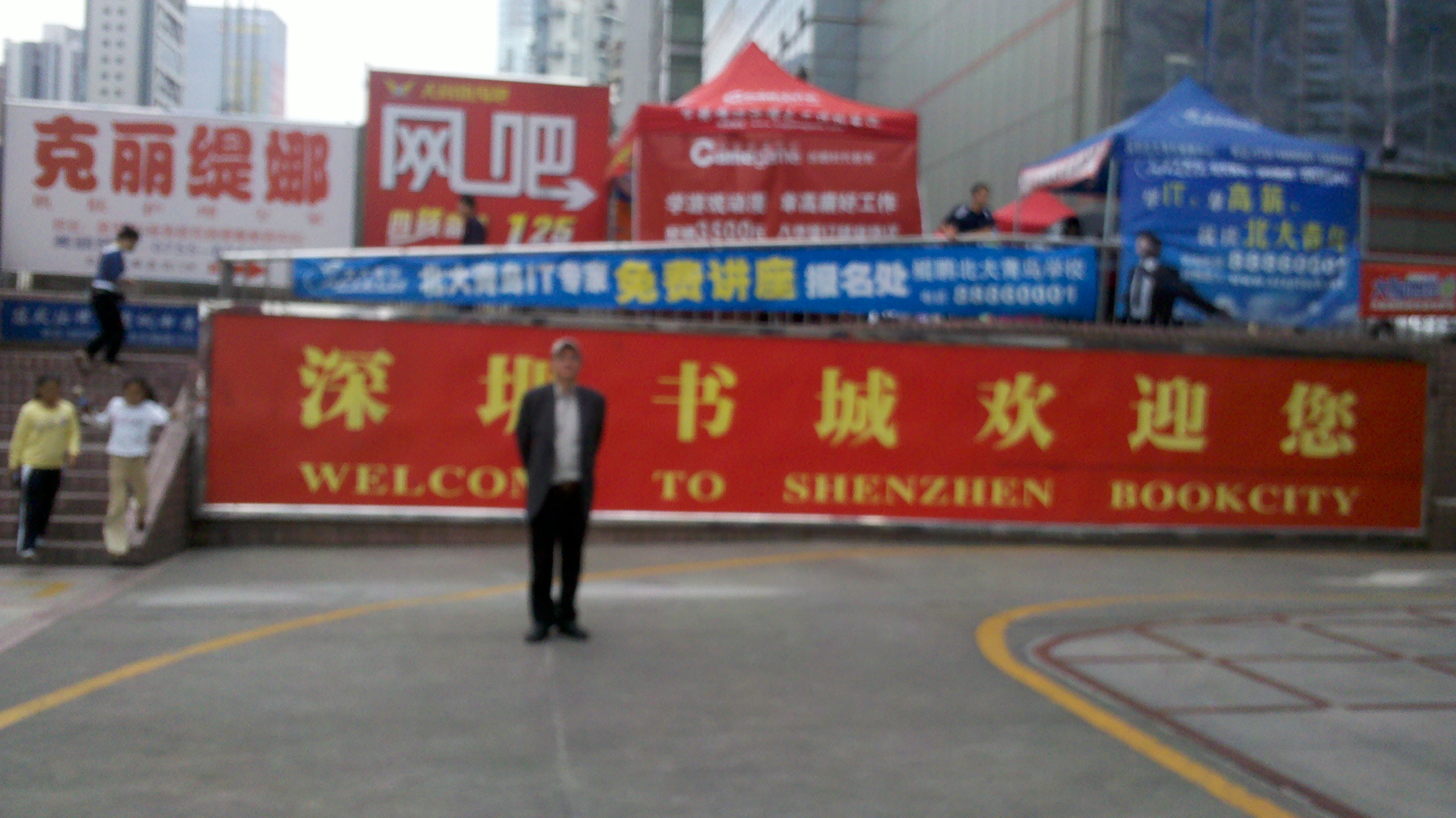 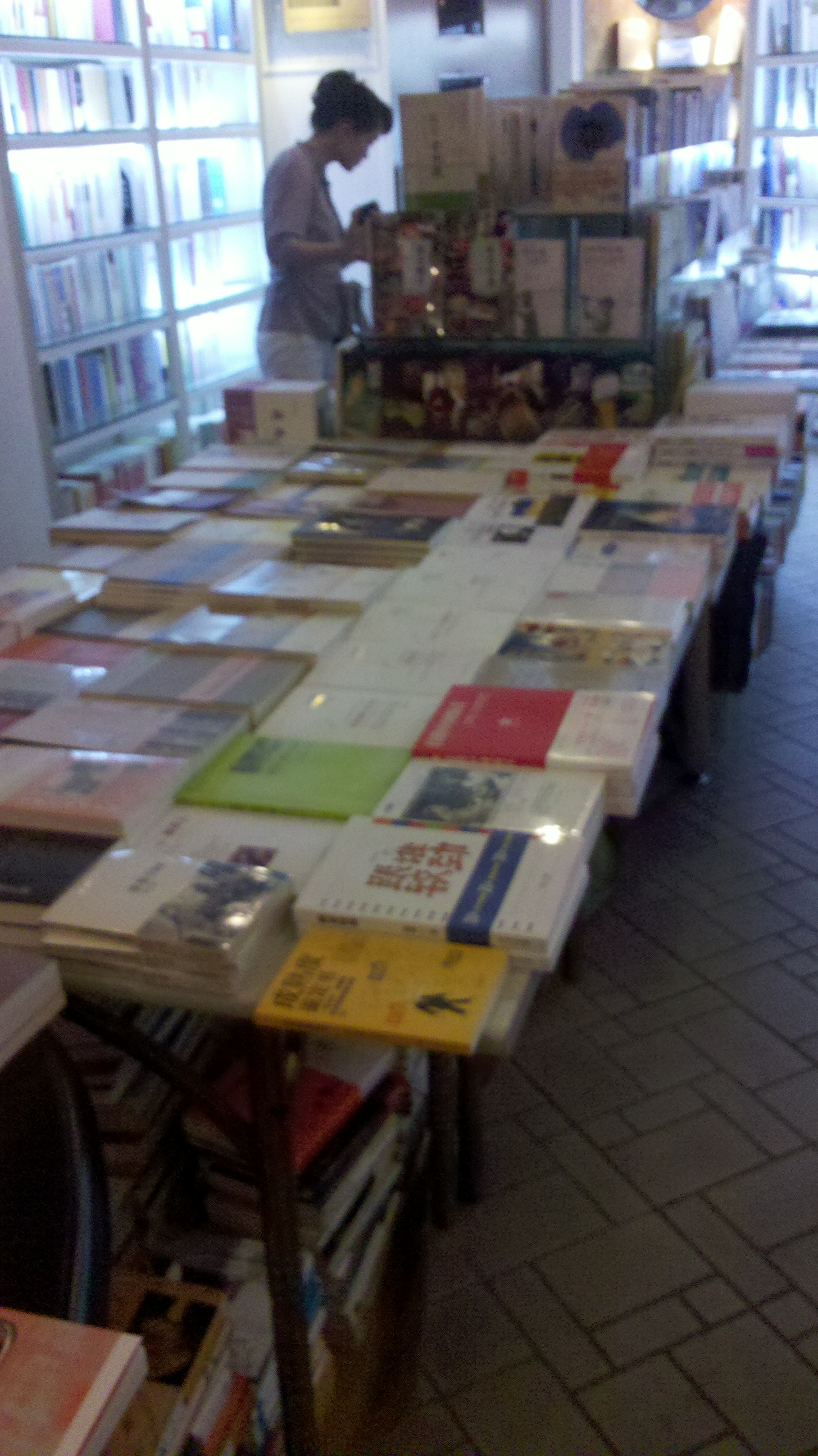 At the suggestion of colleagues from the International Booksellers Federation – a network of booksellers and book trade professionals – the “Reading Month Committee” of Shenzhen, China, recently invited me to come as their guest and at their expense to participate in a conference in November that was part of the city’s 11th annual Reading Month festivities.

Let me begin by describing Shenzhen.

Shenzhen is a new metropolis of more than 12 million people in southeast China. My hosts characterize Shenzhen as the fastest growing city in the world, and, from what I saw, that’s an eminently plausible claim. Located on the Chinese mainland about an hour’s drive from Hong Kong, Shenzhen was a small, sleepy fishing village until about 30 years ago. In the late 1970s, as part of its effort to open the nation to the West, the Chinese government designated Shenzhen as the first “special economic zone,” where private enterprise would be allowed to develop. Aided by special economic policies, foreign investment, and its proximity to Hong Kong, Shenzhen began a remarkable expansion. By the early ’90s, it was a leading manufacturing, commercial, banking, and retail center, and the skyline featured hundreds of massive office and residential towers. (Among the many products from Shenzhen are Apple’s iPhones and iPads.)

This curious combination of free-market capitalism with one-party political control created a powerful economic engine. As described to me during my trip, for decades Shenzhen’s overwhelming goal was growth, as its residents became preoccupied with income and wealth. The resulting business success and opulence is astounding.

After a visit by Deng Xiaoping (memorialized by a massive billboard displaying his picture), it was acknowledged that cities couldn’t just be about wealth and growth, they must also be the home to substantial cultural and recreational institutions in order to be good places to live. So, in that spirit, massive concert halls, libraries, museums, and public parks were built in Shenzhen. Along the way, planners also decided that a world-class city needed – and we certainly wouldn’t argue with this – bookstores. In fact, one of Shenzhen’s leading public officials said that for a city to be great there never should be more than 10 miles between bookstores!

In a striking parallel to the U.S., it was determined that successful bookstores needed to be more than just a place where books are sold – they also should become community centers where people would want to visit and spend time. With the help of a leading Japanese design firm, Kisho Kurokawa Architect & Associates, the city oversaw construction of a mall-size shopping complex that featured Book City – two bookstores of approximately 100,000 square feet. These stores, in turn, were surrounded by restaurants; coffee/tea houses; art galleries; toy, music, and gift stores; and an array of event/performance spaces.

What became clear very soon after my arrival was that the invitation to participate in the Reading Month programming was part of an effort to show off these extraordinary bookstores and Shenzhen’s multifaceted efforts to promote reading, both at home and to people from around the world. Beijing hosted the summer Olympics, Shanghai the recent World Expo, but Shenzhen is determined to be recognized as a city where books and reading are paramount.

Having never been to the Far East, I knew enough not to try to plunge right in after the long flight over the International Dateline. So, my first stop was Hong Kong, where I gave myself 36 hours to get acclimated. After a good night’s sleep – and a few hours playing tourist in Hong Kong (which was pretty interesting in itself, but that’s the subject for another day) – my hosts picked me up for the drive to Shenzhen.

Hong Kong is surrounded by a sophisticated series of very long tunnels and graceful suspension bridges, and, though it’s only a little more than an hour-long drive, approaching Shenzhen I certainly felt as if I was arriving at a very different place. First of all, despite the inclusion of Hong Kong as part of China in 1997 (they call it “the Handover”), there is still an international border to cross, complete with border guards in armbands. I had applied and received my visa prior to leaving the U.S., so the crossing was quick and efficient. The traffic flow itself was the most interesting part of the drive. Unchanged from its days as a British colony, in Hong Kong vehicles drive on the left-hand side of the road. However, in China they drive one the right-hand side, but – amazingly – somehow all the traffic gets sorted out as you cross into China!

Shenzhen is literally at the border, and, as soon as one emerges (on the right-hand side of the road) in China, the traffic becomes intense, and immediately one is surrounded by high-rise buildings as far as the eye can see. Though you can hear English almost everywhere you go in Hong Kong, my driver to Shenzhen spoke no English.

Soon, it was clear that communicating in Shenzhen would be far more difficult. I was dropped off at the hotel, and the hotel staff was polite and cordial, but didn’t have the foggiest idea who I was. It turned out that the rooms for the conference were all booked in the name of one of the organizers. Eventually, it was all resolved, but I had an early lesson in the difficulties of communicating in a world where English is not universal. (Another cultural difference: While the hotel was quite comfortable, it was also clear that smoking is still widespread in China – and there is no such thing as a nonsmoking hotel floor!)

Before I had left the states, I had requested a chance to visit as many bookstores as possible, and, after I had settled in, one of my hosts arrived to lead me on a tour of Book City and to spend a few hours with booksellers before the conference’s opening dinner.

The bookstore was indeed massive, and – putting their business model aside for a moment – it was astounding: bright lighting everywhere, attractive fixtures, broad aisles, ample signage, circular information desks, and computer kiosks throughout the store, where customers can enter the title information and see a store floor plan pop up indicating where the book is shelved. Though there were only books in the bookstore it was surrounded both by an array of smaller stores selling a wide range of other merchandise and by numerous restaurants and coffee/tea shops (including, almost inevitably, a Starbucks). While the store certainly had customers, it seemed fairly quiet, but my guides, Wang Lily and Hao Jilai, assured me that things did get busier.

As we walked around, my hosts brought me to a separate store of about 2,500 square feet – still within the mall but with street access – called 24. The store is open around the clock (literally), and in 24 the booksellers picked all the books. To my astonishment, they had a book about bookstores from around the world, and, amazingly, eight thousand miles from home, I opened it to a picture of ABA member Eagle Harbor Book Company and its owner, Morley Horder! The book included photos of many American bookstores and booksellers, and my gracious hosts insisted I take it home as a gift for the ABA library.

After the tour, I sat with the booksellers over tea (yes, the Chinese do drink a lot of tea). A young woman who had attended college in the U.S. served as my translator, and we all discussed the book business. It was fascinating. My hosts wanted to know what sorts of events attract customers to U.S. stores, and about what we were doing to get younger people interested in books. They were especially interested in e-books, including how to sell and market them in bookstores. They asked about what displays were most effective, and about what media outlets had the most success in generating interest in specific titles. I asked them what titles they were reading, and, though they certainly were aware of some Western authors, it was clear their interest was heavily in Chinese books that were totally unknown to me.

November is Reading Month in Shenzhen, and a number of titles are selected as reading month selections. These titles are heavily promoted (and discounted), and they were part of large displays throughout Book City. In 2010, Reading Month was celebrating its 11th anniversary, and the organizers of the Reading Month festivities had chosen to simultaneously mount a conference to promote books and reading while creating a forum to discuss emerging issues surrounding changes in the media and the emergence of digital books. In addition to myself, the participants included one other Westerner, Jo Lusby, the general manager of Penguin Asia; Li Jiangping, an officer from UNESCO’s Beijing Office; Du Ping, a prominent TV news personality; Song Wei, the head of the Shenzhen Children’s Library; Ling Feng, a well-known entertainer; and, the moderator, Chen Bing, a commentator and columnist, among others.

The meeting took place in Shenzhen’s imposing public library, located adjacent to the bookstore. I spoke about the American book business, and it appeared that my remarks were well received.

Throughout my visit, I was feted with much fanfare – to say the least, the Chinese are very gracious hosts. Each dinner was more elaborate than the one before, and all were punctuated by a series of continuous toasts and speeches. And I can attest that Chinese food in China bears little resemblance to Chinese food that we are used to in America.

On my last day in Shenzhen, which was a Sunday, I was given a full tour of the city, including visits to other bookstores. As opposed to my first bookstore visit, when things were a bit quiet, the stores on Sunday were mobbed with thousands of shoppers. There were long lines at the cash-wraps, with most customers carrying armfuls of books. Beyond the bookstores, it seemed like every prominent high-end fashion retailer (Gucci, Prada, Cartier, Dior, Armani, to name just a few) had stores in Shenzhen. Throughout the tour, there certainly were no signs of any economic slowdown!

Towards the end of my visit, I was introduced to He Chunchi, the chairman of the company that owns the combined book publishing, distribution, and retail bookstore businesses, at a formal reception, during which we were all seated in large wing chairs as we discussed the book business. Throughout the visit, my hosts presented me with several gifts, but one was especially notable. At the farewell dinner, my hosts had invited Liu Yong, an up-and-coming young author and artist. After signing a copy of his latest book for me, he proceeded to paint with his fingers (right in front of me) a magnificent picture of an eagle soaring over the city of Shenzhen, which he then inscribed to me in beautiful calligraphy. It was truly remarkable!

My few days in Shenzhen were full of many reminders about how important books are, and, despite the numerous differences between us, how we share a common goal of encouraging reading and promoting books. Before I knew it, filled with lasting memories – and having made many new friends – it was time to cross the border to Hong Kong for the long trip home.